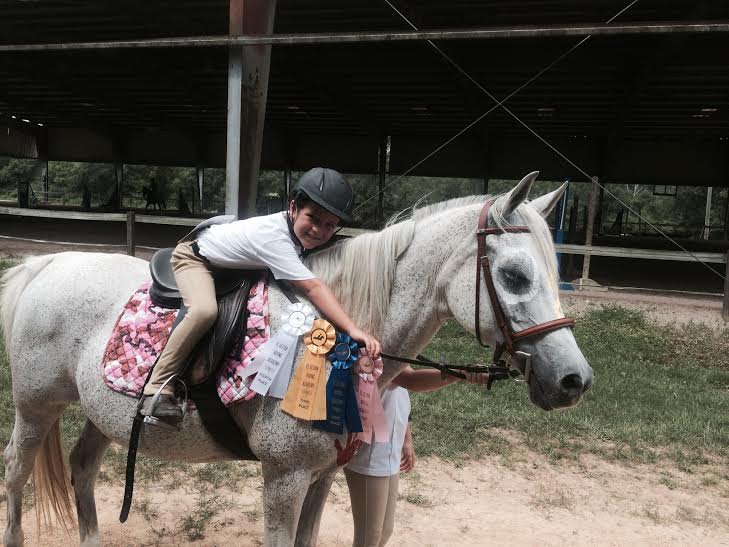 Preston Healy and his horse Issy show off four ribbons from his first show. Submitted photo

Preston Healy is only a 9-year-old boy, and he loves little boy things, such as running around his living room floor. The difference is when he does it, he’s not just prancing around like little boys sometimes he. He’s practicing. Practicing exactly how he is going to win his next award showing horses. 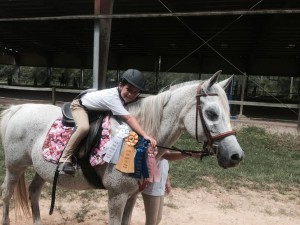 Preston Healy and his horse Issy show off four ribbons from his first show. Submitted photo

Over the summer, Preston showed off his talent at the Alabama Hunter Jumpers Association (AHJA) horse show at El Gezira Riding Academy, where he won seven ribbons in eight classes entered.

While at camp over the summer, Preston practiced with the school horse “Issy”.  He doesn’t own a horse, so he has to ride school horses. With school horses, they jump you around until the instructor likes you on one, Preston’s mom Ruwena Healy said. Issy was the horse Healy won the ribbons on in the show.

Preston not only has to have physical talent, but mental talent as well. Preston said he is tested on several aspects of horse riding, including parts of a horse, parts of a saddle and memorizing the drill patterns.

“We do these drills at camp, and the person riding has to memorize it,” he said.

The drills teach riders how to show the horse and when to jump, run and even bow to judges. All of the horses parade during the drills and do the same routine, giving the horse and riders repetition.

Preston spent a full week at camp, and was the only boy in camp with several girls.

“I didn’t sleep in their cabin, thank goodness,” Preston said.

Preston began taking lessons because one of his friends had a horse and he was checking out books in the library, and one of them was about 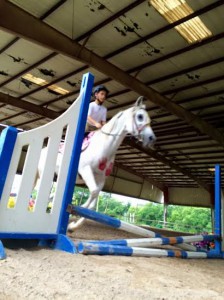 horses. He liked to watch videos about them, and it grew from there.

He began taking riding lessons locally at Dreamweaver Stables, but the stable was unable to continue lessons, leaving Preston without any place to learn.

Dreamweaver’s owner, however, made sure Ruwena knew to find him a place to ride because he was no doubt a “natural”. Now, his mother takes him to the Academy in Harpersville.

He’s never been afraid of horses, and despite his parents knowing very little about the animal, Preston has become very acquainted with them.

At the show, the better they perform, the instructor may allow riders to enter new categories. Preston performed so well, he was allowed to enter eight categories in the latest show.

The instructor told Preston he could do four events to begin, and as the instructor was evaluating him, they allowed him to do four more events.

“I couldn’t do more than (event) 10, because the horse was tired. Well, she wasn’t tired because she has a lot of energy, but it was too much, and she doesn’t know that,” Preston said of Issy.

Preston is entering another show this fall, and is practicing his routine in the living room daily in order to have it memorized.

He was named “Best All Around Camper” at El Gezira’s camp over the summer.