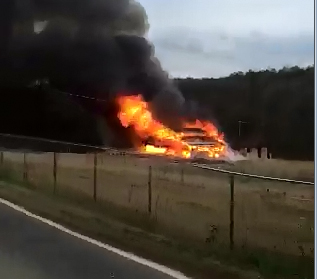 TRUSSVILLE –Trussville Fire and Rescue is on the scene of a barn fire on Floyd Bradford Road according to Assistant Fire Chief Tim Shotts. Shotts said the barn was a total loss.

“I’m not sure how long it was burning before we were notified, but it was well underway when we got here,” Shotts said.

There were no injuries in the blaze. Shotts said the barn was in a pasture with horses, but no people or animals were injured.

Trussville firefighters have the fire under control and are simply putting out hot spots as of the latest report.