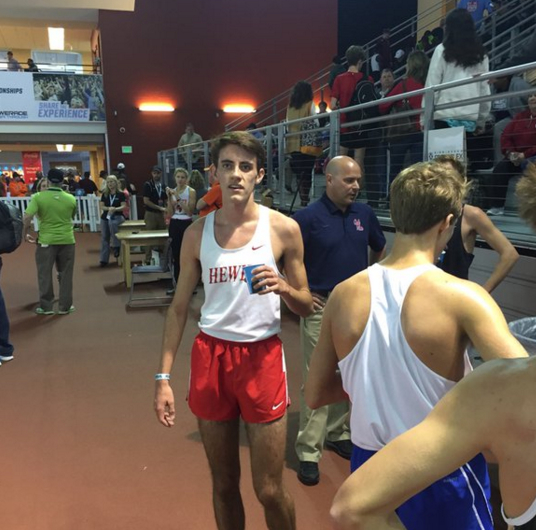 Ben Knox at the State Championship Meet on Saturday. Photo via Hewitt-Trussville athletics

BIRMINGHAM – Head coach David Dobbs and the Hewitt-Trussville track and field team put an end to the indoor season with a strong performance at the AHSAA Indoor State Championships on Saturday.

His boys finished the meet at No. 3 behind No. 2 Hoover and No. 1 Auburn. In girls competition, the Huskies came through at No. 11 with Hoover claiming the top prize. 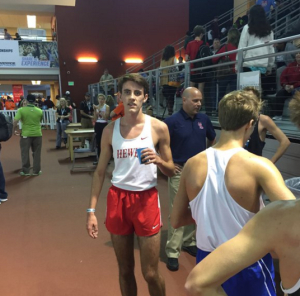 Ben Knox at the State Championships on Saturday. Photo via Hewitt-Trussville athletics

The boys got a major bump from junior Noah Igbinoghene, who brought home a pair of first-place finishes along with a bronze. Igbinoghene, a multi-sport standout, shined in the triple jump event with a leap of 14.65 meters, .37 meters farther than the second-place finisher.

He also took gold with a trip of 7.16 meters in the long jump, claiming Hewitt-Trussville’s second state record of the day. He later finished third in the 60-meter dash.

Senior Ben Knox also grabbed ten points for the good guys with a first-place finish in the 3,200-meter run. He stopped the clock at 9:27.12, more than eight seconds before Hoover’s Tommy McDonough crossed the line. That effort set a new school and state record.

Knox later placed sixth in the 1,600-meter run with a time of 4:26.14, less than a second behind teammate John Ngaruiya who finished the run at No. 5 in the state.

Hewitt-Trussville also got a gold finish from paraplegic athlete Collin LaFon. The senior took the state’s top prize in the wheelchair shot put with a toss of 3.75 meters over the weekend. Fellow thrower Jaison Williams also did the Huskies proud.

Williams, who recently signed a football scholarship with Austin Peay University, earned his team five points with a fifth-place finish in the shot put event.

Hewitt-Trussville continued to make noise in the relay events with a fourth-place finish in the 4×800 and fifth in the 4×200.

In girls competition, the Huskies brought home a sixth-place finish in the 4×200-meter relay with a time of 1:47.64.

Hope Igbinoghene led the girls with a No. 4 finish in the 60-meter dash, stopping the time at 7.85.