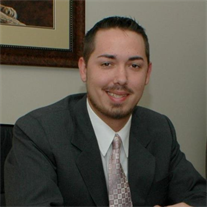 Dean Taylor’s life was tragically halted on March 19, at age 35 as the result of an automobile accident. Dean was gifted in so many ways, but denied the gift of the length of years.

Dean accomplished so much in his 35 years which culminated with his election to the five-member Jefferson County Board of Education in 2014. Before his election to the Board, he was a graduate of Gardendale High School (1999) and went on to study at Bevill State Community College before joining the United States Air Force in 2001 for a six year enlistment. During his military service, he received a secret security clearance from the Department of Defense due to the nature of his work managing the testing of ordinances and munitions that Air Force pilots were using to protect our freedom all over the world. Dean’s many Air Force deployments included a year at Pusan Air Force Base in the Republic of Korea, which he liked to say “was a long way from home!” At Pusan, Dean was tasked with managing all time schedules for the Air Force’s “Operation Readiness” mission for all flights through the entire Pacific.

After receiving his honorable discharge from the Air Force in 2007, Dean returned home and took a position with Webb Payroll as Vice-President for Sales and Marketing which is the position Dean held at the time of his passing.

He was elected to the Board in November of 2014, and at the age of 34 he attended his first Board meeting the following January and was UNANIMOUSLY elected President of the Board by the other four Board members! Dean had an abiding faith in school personnel to make the right decisions. During his term as president, the Board was confronted with a financial proposal that would eliminate almost 300 jobs in order to “balance the books.” Dean suggested that a “blue ribbon” outside panel of citizens be appointed by the Board to review the system’s finances. The panel was appointed and discovered savings of million without the elimination of a single job. Dean said if he never accomplished anything else as a Board member, he would sleep well knowing that these 300 or so families had been spared the loss of their income.

Dean believed in paying civic rent and he believed in making a better life for his seven year old son, Bronson. He often said that his greatest pleasure was making personal time for Bronson, but when he worked on his many chamber of commerce projects, participation in Young Republican events or JeffCo Board of Education matters, he was “making the world a better place for Bronson and all the kids like him.”

Dean Taylor truly paid it forward every day and leaves a void in so many lives. He was preceded in death by his father, Jeff Taylor and his sister, Gail Taylor. His survivors include his son, Bronson Taylor; his mother, Sherry K. Webb (Steve); grandparents, Jim and Joyce Taylor, Myra Armstrong (Jerry) and Harry F. Keplinger (Pam); uncles, Keith Keplinger (Michelle), Harry F. Keplinger Jr. (LuAnn), Daryl Keplinger and Karl Keplinger; aunt, Kari Keplinger and a host of cousins, friends and colleagues. Visitation will be Wednesday, March 23, 2016 from 11 a.m. until 2 p.m. in the chapel of The New Gardendale Funeral Home with the service to follow at 2 p.m. Burial will be at Oakwood Memorial Gardens.

In lieu of flowers, the family requests donations be made to the Raymond Doss Playground of Miracles – PO Box 889, Gardendale, AL 35071.