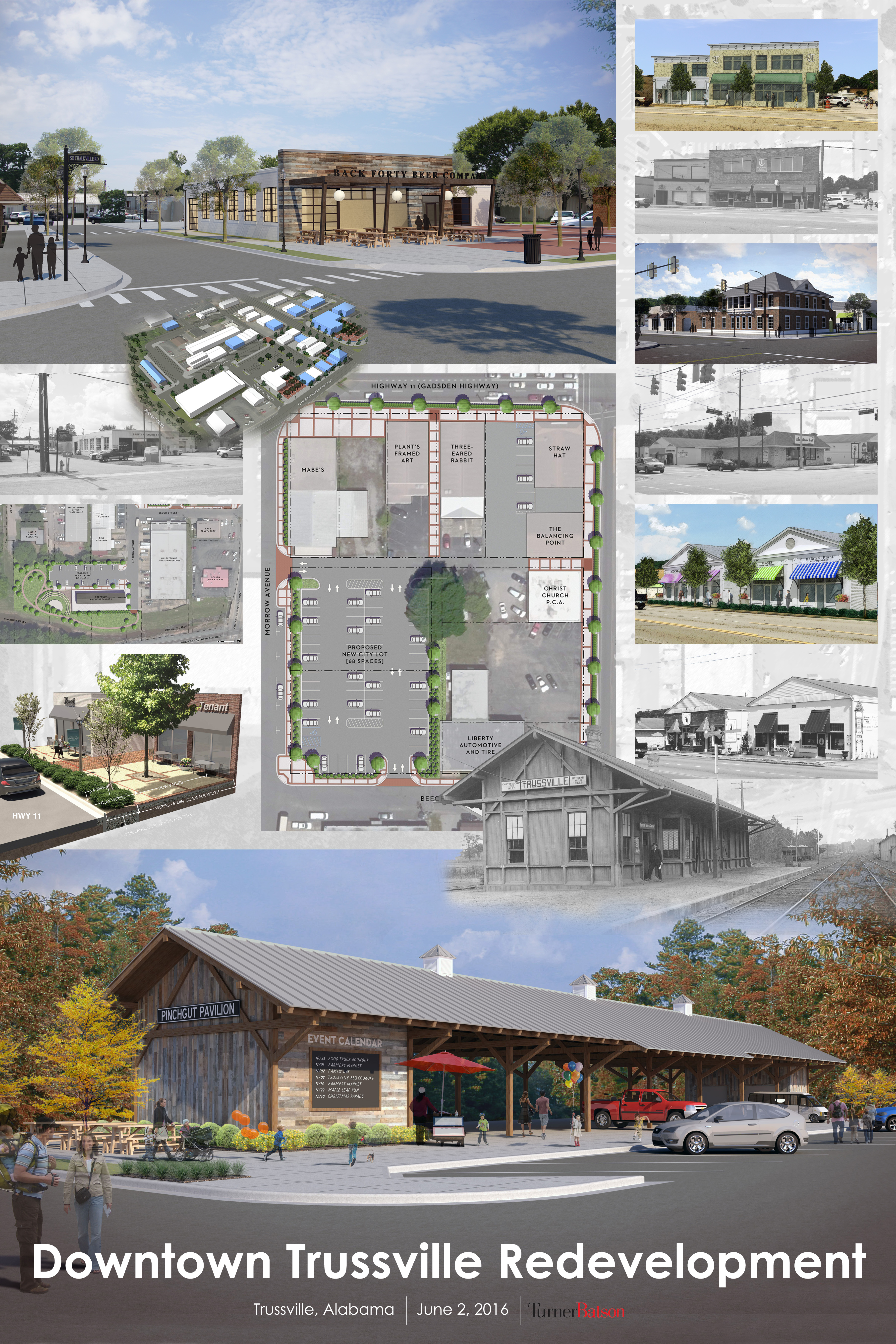 TRUSSVILLE –The Trussville Redevelopment Authority unveiled a comprehensive plan for the first phase of downtown redevelopment on Thursday night. The architectural rendering shows the block that includes The Straw Hat, Three Earred Rabbit, Liberty Automotive and the former Mabe’s building, known as Quadrant One.

Surveys of the block have been completed and several parcels of land have been acquired to make way for the project, with at least one acquisition still in process.

Highlights of the plan include new sidewalks with brick dividers, street lighting, landscaping and a public parking lot behind the Three Earred Rabbit to accommodate almost 70 vehicles. 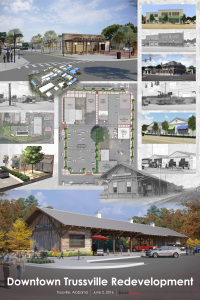 Drawings of the plan and proposed engineering work for the sidewalks, traffic signals and property access have been forwarded to the Alabama Department of Transportation for consideration and approval. ALDOT will have the final say in all traffic improvements for the area as Main Street (U.S. Highway 11) is a state highway.

Other elements of the concept include a pavilion reminiscent of the old Trussville train depot, with walking trails, an amphitheater and additional parking for 41 vehicles along Pinchgut Creek at the south end on Morrow Avenue.

Members of TRA and elected officials have met with numerous private developers and business owners who have expressed and interest locating businesses in the downtown area. Some developers have expressed an interest in renovating existing buildings while others are more interested in developing vacant property with new buildings.

Additionally, TRA forwarded a proposal to the city council for consideration that would allow property owners to apply for grants in order to improve their buildings to enhance the downtown area. The proposal includes an investment from property owners and approval of city boards in order to obtain a grant to help offset the cost of exterior renovations.

Trussville councilmen Buddy Choat, who serves as one of the council liaisons to TRA, and Anthony Montalto attended Thursday’s meeting.

“We have looked at other cities to see how they have done projects like this,” Choat said.

Choat and Montalto said the council members have informally discussed different ideas for funding potential grants and redevelopment in general.

“This is an area that has been neglected and we need to make an investment,” Montalto said. “We may need to consider level funding parts of the budget to redirect money here.”

The city has partnered with TRA in numerous ways since downtown redevelopment has been underway, through land acquisition and funding TRA financial commitments.