One at large after home invasion near Center Point

CENTER POINT — Just after noon Wednesday Jefferson County Sheriff’s deputies responded to a report of a burglary in progress at a residence in the 3100 block of Cobblestone Drive near Center Point. 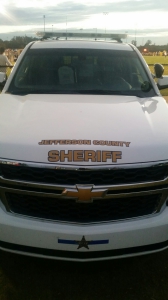 The adult male victim said that he was in his bed when he heard someone kick open his back door, and found a black male suspect, armed with a handgun, had entered his home. The suspect stated he was looking for the son of the victim, who was not home at the time.

The victim and the suspect struggled, leading to the victim being stuck in the head with the gun by the suspect. The suspect also fired several shots before fleeing on foot, but nobody was hurt as he fired shots. The victim told deputies he waited half an hour to call 911.

Neighbor Bryan Hughes lives four doors down from where the altercation took place, and heard it start to unfold.

“I was upstairs in my room, watching Netflix, and I heard some shots go off,” said neighbor Bryan Hughes. “I looked outside and a few minutes afterwards I saw a guy running down the street that matched the (suspect) description.”

Sheriff’s K9’s searched the area for the suspect, but he was not located.

Hughes describes the suspect to have been wearing black shorts and a gold shirt with a single black stripe across the chest. The man was black and had short hair.