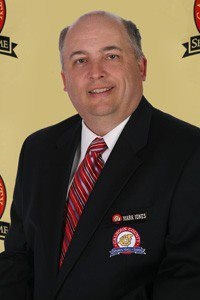 “I am very excited to have the opportunity to accept this position with the AHSAA,” Jones said. “This is a dream job for me. Sports and officiating have been a

substantial part of my entire life.  I know it will be a challenge for me to maintain the standard that has been set by Greg Brewer. Because of Greg, officiating in Alabama is well respected across the nation.”

Jones is coming to the AHSAA with 32 years of experience from JSU, and will be replacing Greg Brewer, who has been serving in various roles since 1984.

Jones has been a councilman since 2008 and is a member of the Calhoun County Chamber of Commerce Board of Directors since 2013. He has experience officiating high school basketball, football and baseball, and spent eight years officiating women’s basketball in the NCAA. Jones has also taught officiating classes for multiple sports at JSU for more than two decades.

“We are fortunate and delighted to have Mark Jones joining our staff,” Executive Director Steve Savarese said. “He is a talented individual of strong character who has been an outstanding contest official and mentor of officials in the AHSAA for many years. He has already been an important member of our AHSAA family while working in athletic administration at JSU and through his work as a teacher of sports officiating.  Greg Brewer served the AHSAA for more than three decades. While we are saddened to see him retire, we wish him well and feel certain that Mark Jones will step in and aptly lead our more than 7,000 contest officials as well as becoming an important addition to the AHSAA family.”