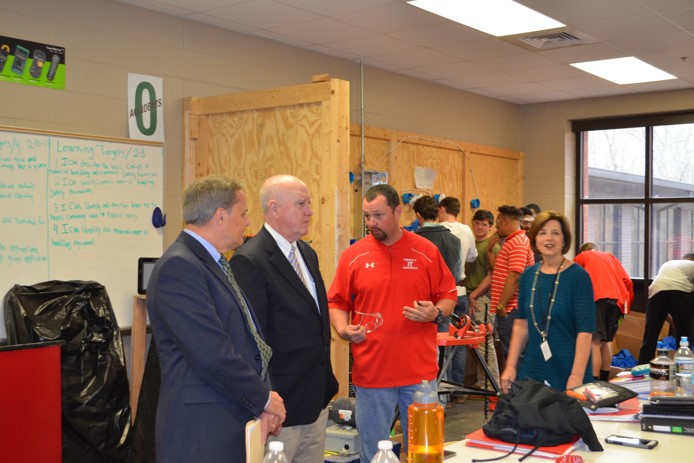 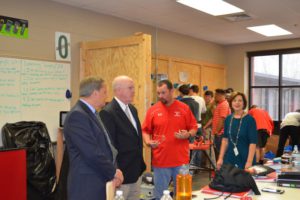 During the visit, Sentance toured Cahaba Elementary School, taking in the renovations to the building, and learning of its history. He was able to stop by several classrooms to see the strategies TCS teachers are taking to engage young learners.

Talladega County state legislator Pebblin Warren joined the group on the tour. Her grandson is a student at Cahaba Elementary. It was a pleasant surprise for him to get a visit from her.

From there, the group visited Hewitt-Trussville High School where Sentance was shown several academies the school offers, as well as classroom teachers. From the culinary arts where students were preparing to cater wedding in the school’s professional kitchen to other academies such as electrical studies and Emergency medical training. The visit took the Superintendent through several classrooms as well, and he had very positive things to say about Trussville City Schools.

“Here we saw, in science classes and engineering classes, culinary arts and even in the elementary program, you saw great teachers doing great work,” he said. “This is a program we can learn a lot from.”

The visit then took Sentance to both Clay-Chalkville and Pinson Valley High Schools where visited some of the same academy-style classes as well as classroom teachings.

At Clay-Chalkville, the tour showed off an electrical class as well as the brick mason class taught by Clay Mayor Charles Webster.

The visit was a positive reinforcement of the steps schools in Alabama are taking to improve consistently under Sentances’ leadership. Sentence did say, however, even with all of the positives he’s seen on his visits around the state as Superintendent, the message is still that we must get better.

Overall, Sentance was impressed by all of the area schools, and Garrett was proud to show them off.

“There’s a lot of community support, community pride,” Garrett said. “It was just good to show that off.”