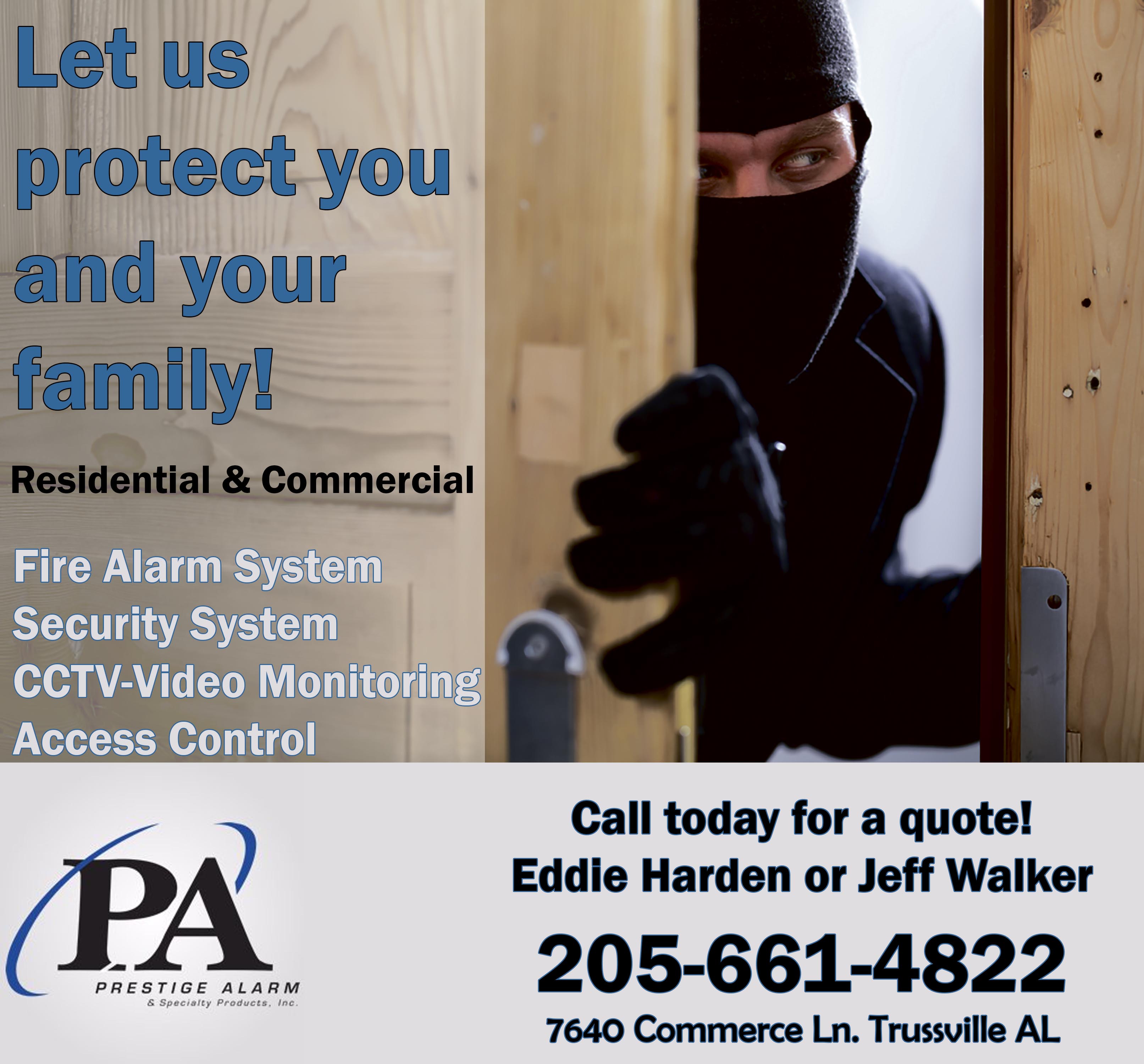 TRUSSVILLE — Eddie Harden was set to become a minister. An endowment scholarship to seminary and a willingness to serve led him to that decision. Just before enrolling, however, Harden felt a change of heart.

“I think it was more me wanting to go instead of the Lord. We came home, took our house off the market and started a business in 1994,” he said. 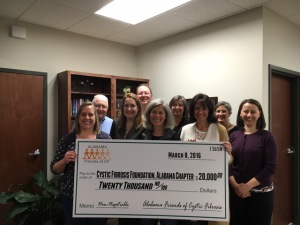 The Alabama Friends of Cystic Fibrosis, founded by three Trussville families with children affected by the disease, recently made a $20,000 donation to help with continued research, education, awareness and support. (photo submitted by Barbara Harden)

That business is Prestige Alarm and Specialty Product, Inc. and it’s been going strong for more than two decades. The heart of a minister, though, hasn’t left him. It has simply just become part of the way he does business. And business is good.

Jeff Walker knows all too well how big Harden’s heart really is, and how much he reaches out to the community.

“Eddie runs this company like a ministry. We get in depth with Biblical discussions, pray before lunches,” he said. “He’s extremely generous and has been truly blessed by creating a wonderful Christian business. He has a huge heart, and I have seen God work in great ways. It is amazing how God has blessed this company.”

One of those community efforts is the annual Blow Away 5k hosted in Trussville each November. It is the largest race in Trussville each year, and benefits Cystic Fibrosis. Harden’s wife, Barbara, has taken over the reigns of promoting the event, and Prestige Alarm is one of the title sponsors for the event The city-wide event had 350 runners last year.

“We generally have three presenting sponsors, and without them it wouldn’t happen,” Barbara Harden said.

All the money from the people who participate is donated to Cystic Fibrosis research. The sponsors are the ones who allow for the set up and the amenities of the race.

Runners begin the Blow Away 5K race a couple years ago.
photo courtesy of www.blowaway5k.com

“In order for this race to happen, we need companies to step up and support this cause.”

Having employees who have long tenures is something Harden is proud to talk about. Jonathan Barrett has been with the company for nearly 20 years, and the heart of Harden has certainly rubbed off on him. He is part of the Designs for Hope group that helps get self-made power and water filtration systems to third world countries. In fact, Prestige Alarm will donate batteries to the ministry because they’re the same ones used in the systems the company sells.

“The way they manage the business, I’ve never gone without the things I need to do my job even in the rough times. When the housing bubble burst in the late-2000s, we powered through,” Barrett said. “They run a tight ship, but are also very generous.”

To be able to give so generously, the business must be successful. Over the last 23 years, Harden has proven that, in his industry, consumers truly get what they pay for.

While the business has focused mainly on commercial fire alarm accounts over the past few years, they are still in the residential market. With a Prestige Alarm system, Harden says, there is no free alarm systems.

By that, he means his system may not be free like many national security system companies offer, but the quality of work is worth the additional price tag.

“We start with a good perimeter system by placing door contacts and window contacts on all the windows. We put glass break detection in. We have dual technology motion detectors,” he said.

Before installing a system, a technician does a full security evaluation and then will come in and secure the home accordingly.

“I want to teach people, business and homeowners alike, the difference between the national companies and what you get with a fully integrated and monitored system,” Harden stressed. “Those companies put in the least expensive thing they can find and then sell your contract.”

Barrett added that with a “free” installation of a security system, sometimes that can be misleading.

“Some companies will come in and put in the basic system which might be two doors and motion sensor,” he said. “Back when we were doing a lot of houses, people would tell me they had a monitored system and I’d find one smoke detector in the entire home. That was just those companies doing the bare minimum.”

Prestige Alarm not only places smoke detectors in every bed room and outside every bedroom, but also monitors that system without the use of telephone. The way they do it is with a system known as PRESnet TM.

PRESnet is an FCC-licensed radio network that enables us to monitor alarm systems differently than anyone else. It works on a mesh radio network.  The radios will talk to one another and as the signals work their way through the network it then hits the central station and sends the information.  This all happens in a split second. Far faster and far less expensive than that of a telephone line.  Barrett said that alone will give you peace of mind.

“Having a monitored security and  smoke system means that not only will it wake you up, but it will call the police and fire department to your home,” he said. “It will also give you peace of mind that when you’re on vacation, the police and fire would be called if the need arises.”

That peace of mind is something Harden strives to achieve. Along with that, the professionalism and generosity of his company are tops on the priority list.

“We try to exceed professional expectations. We take pride in what we do,” Harden said.