TRUSSVILLE – The Trussville Area Chamber of Commerce is pleased to announce its August chamber luncheon speaker will be Alabama Attorney General Steve Marshall. 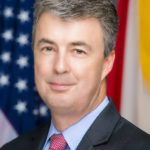 Steve Marshall will be the guest speaker at the luncheon. Photo by Trussville Area Chamber of Commerce.

The luncheon is sponsored by First Commercial Bank.

Steve Marshall became the 48th Attorney General of Alabama in February of this year. When he was sworn in at age 36, he became the second youngest District Attorney in Alabama.

The luncheon will be held on August 17, at the Trussville Civic Center, located at 5381 Trussville-Clay Road.

Reservations are $17 each and are needed by noon on August 15. Network development time begins at 11:30 a.m., and lunch is served at noon, followed by Attorney General Marshall’s presentation at approximately 12:30 p.m.  The chamber will also announce its August Customer Service Award recipient.

For more information, visit www.trussvillechamber.com or call the Trussville Area Chamber of Commerce at 205-655-7535.