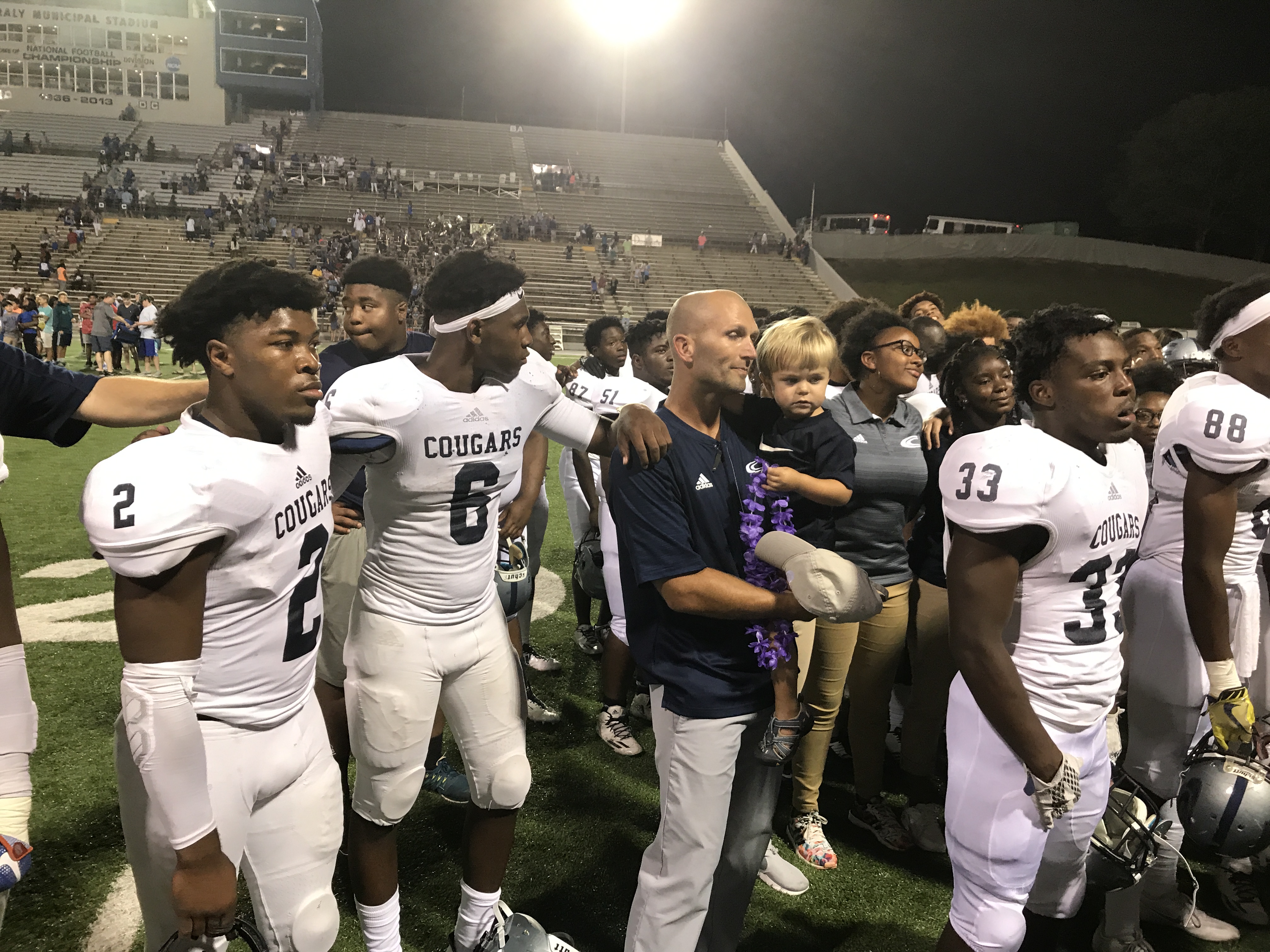 Drew Gilmer spends time with his child and team after his debut game.

FLORENCE — The Drew Gilmer era started off with a few too many errors for the Clay-Chalkville coach’s liking.\ 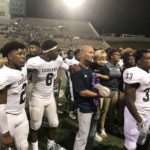 Drew Gilmer spends time with his child and team after his debut game.

Three first-half interceptions, two penalties that nullified touchdowns, and missed extra points put the Cougars in trouble at the half. Still, they were down just two points to the host Florence Falcons at Braly Municipal Stadium.

“We needed to clean up a few things,” Gilmer said. “Too many mistakes. I told them at the half that if we eliminate some of those mistakes, it’s a different ballgame.”

And it was, in a see-saw second half. The Cougars made no turnovers in the second half, eliminated some of the penalties, and went away with a 31-27 win Friday night. The Cougars rallied from a 14-0 deficit to outscore the Falcons 31-13.

“It feels good,” Gilmer said of his first career win, “but we’ve got to get better.”

It looked bad early for the Cougars.

The Falcons took the opening kickoff and Armoni Goodwin, the fleet Falcon freshman who’s created buzz already, brought the kick all the way back to the Cougars 26. Goodwin finished the drive off with a 3-yard run and Nathan Cobb’s extra point gave Florence a 7-0 lead with 9:23 in the first quarter.

The Cougars moved the ball on their possession, and Willie Miller hit Roderick McCloud for an apparent score, but it was called back. Miller tried a deep pass again but it was picked off on the Falcons 5.

The Cougars got the ball back, but Miller lost the ball as he was attempting to pass and Kiarion Freeman snatched it away and rumbled 48 yards for a touchdown. The PAT by Cobb made it 14-0 with 35 seconds left in the opening quarter.

Clay broke through, going 80 yards for a TD. Miller found McCloud open in the end zone for a 19-yard TD. The PAT again failed.

The Cougars held again, and Jaylin Mack brought the punt back 41 yards to the Florence 49, Quentin Young raced through the Falcons on the next play for a score. The kick again failed, laving it 14-12, Florence with 6:01 in the half.

Clay’s defense remained stout, but the offense couldn’t capitalize on good field position. Miller fired a hard pass that was tipped and intercepted to end one drive. D’Markus Davis recovered a fumble late in the half and returned it to the Falcons 10, but a reverse didn’t gain anything and the Cougars couldn;t spike the ball before the half ran out.

The Cougars were dominating now in almost every category except the scoreboard, mostly because they were “dominating” in turnovers and penalties.

They came out in the second half and cleaned it up just a bit. A bad punt gave Florence an opportunity, but the Falcons missed a field goal. Then,the Cougars went 80 yards in 15 plays to take their first lead. All were runs until Miller scrambled away from trouble and found McCloud for 36 yards to the 1. Demetrius Davis took the snap and pushed in for the score. His two-point pass failed, leaving Clay up 18-14 with 2:15 left in the third quarter.

But Florence answered  in three plays, the counter being a 22-yard run by Goodwin.The kick made it 21-18 with 1:29 left in the third quarter.

But the wild back-and-forth continued as Florence scored on a 17-yard Bradley Dorin to Cadarrius pass. It was 27-21 Florence with 7:21 left.

The Cougars retook the lead for good on the next drive. The Cougars drove 72 yards in five plays. Curtis Blakely carried three times for 35 yards, Miller connected with McCloud for 20 and then the junior quarterback finished it with a scramble and a dive into the end zone. Drennon Mayhew’s kick made it 31-27 with 5:50 and the Cougars held on.

In Florence’s last drive, Andru Ransaw made a big hit on third-and 3 and L.C. Purifoy and Sam Thomas combined for the stop of fourth down to lock it up.

“I though our running game was really, really good. All the backs did a good job with ball security and the offensive line did a heck of a job all night,” Gilmer said.