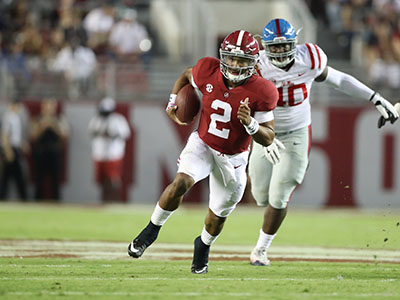 ROUT 66: ‘Bama rides over Ole Miss, tying a school record for points score in a game

Saturday’s match-up between the No. 1 ranked University of Alabama football team and Ole Miss was not the type of game between the division foes with which fans have become familiar in recent years. 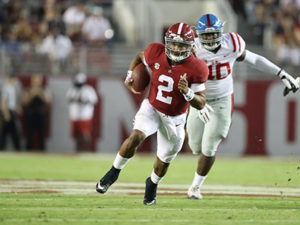 In the last three seasons, the game was decided by a touchdown or less. During Saturday’s rout of the Rebels, Ole Miss didn’t make a touchdown while Alabama scored 66 points, the largest margin of victory by The Crimson Tide against the  Rebels since 1930 when ‘Bama beat Ole Miss 64-0.

Alabama’s score on Saturday tied school history for the most points ever put on the board by Alabama. The other time ‘Bama took Route 66 was in 1979 in a game against Vanderbilt. Coincidentally, Vandy, like Ole Miss, also only got on the scoreboard with a single field goal.
Obviously, the 5-0 team dominated the Rebels (2-2) on all aspects of play, outgaining Ole Miss in yards, 613-253.

On the offensive side, quarterback Jalen Hurts finished the game 12-of-19 for 197 yards and two scores through the air and rushed for 101 yards, including a running touchdown.

Other Crimson players who ran the ball into the endzone were freshman running back Najee Harris, freshman quarterback Tua Tagovailoa and junior running backs Ronnie Clark and Bo Scarbrough.

Alabama goes on the road this weekend, travelling to College Station, Texas to face Texas A&M.