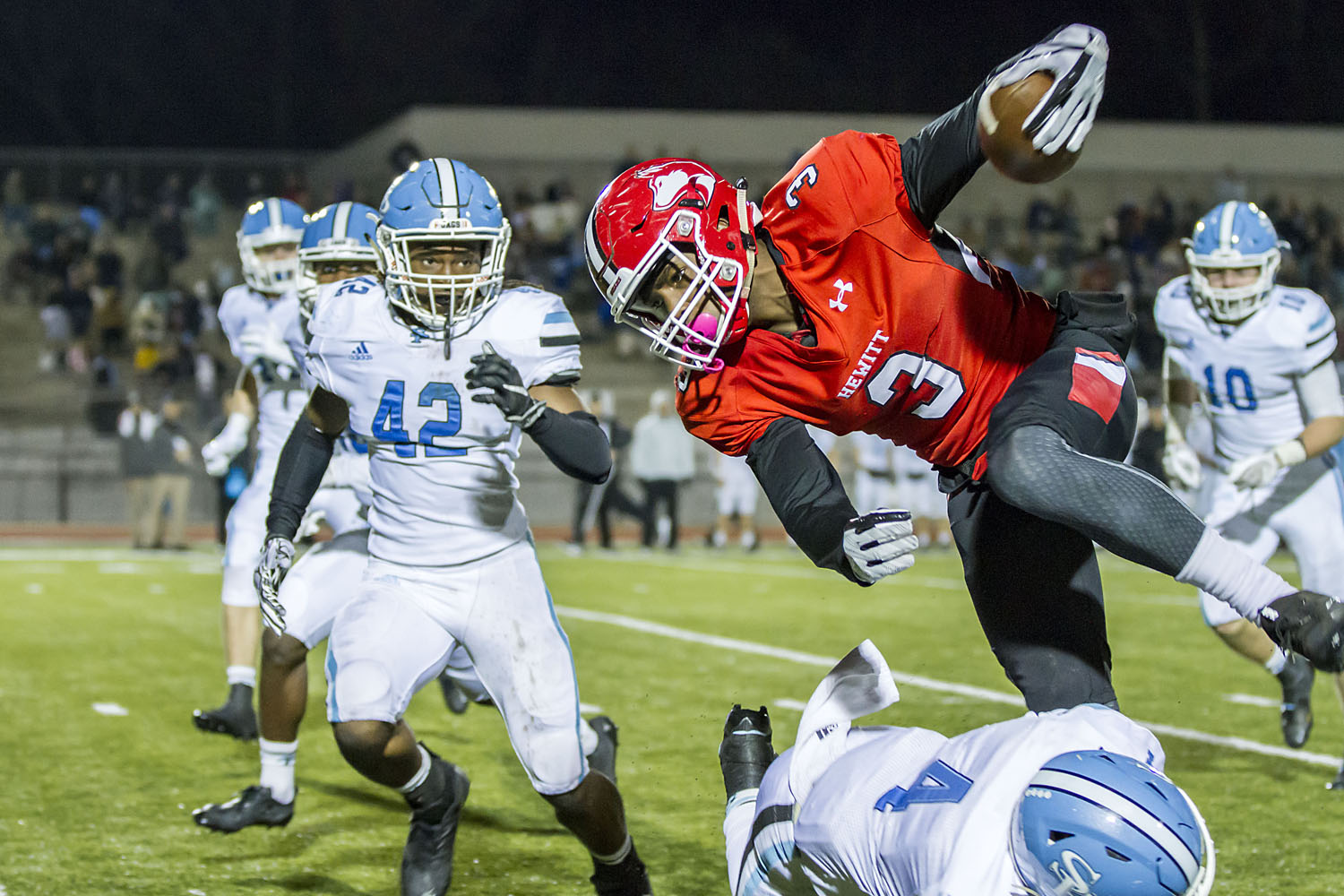 Huskies smack Jags to go 11-0, Hoover up next

TRUSSVILLE – Hewitt-Trussville defensive back Malachi Moore was letting his teammates know what was on his mind. “Three more! Three more!” 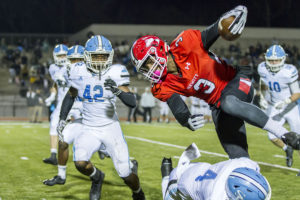 That’s the number of wins the Huskies need to earn their first state football championship. The Huskies took step number one Friday night on Husky Field by taking down Spain Park 33-21 before a shivering packed house.

Moore sealed the tough win by recovering a Spain Park fumble on a kickoff return with 90 seconds left, and soon after Hewitt-Trussville students had spilled onto the field among the players celebrating a Round 1 win in the Class 7A playoffs.

“Give Spain Park credit,” Huskies coach Josh Floyd said. “They played our tails off, but we knew they would, they’re a really good football team. But we talked all week about how the more physical football team would win, and in the end I think we showed that.”

The Huskies (11-0 for just the second time in school history) started slowly against the stubborn and scrappy Spain Park defense. The Jaguars and Huskies were scoreless after a quarter.

But early in the second period quarterback Paul Tyson used his legs to scramble the Huskies into scoring position, and Parker Colburn knocked through a 29-yard field goal to give Hewitt a 3-0 lead with 9:17 to play before half.

The Huskies defense made short work of the Jags’ next drive, and the offense stretched the lead quickly. Tyson picked up another couple of good gains on the ground and then hit Logan Pitts with a terrific pass for a 16-yard score. Colburn’s kick made it 10-0 with 2:27 until intermission, and that’s the way the half ended.

“I thought Paul made some big-time throws,” Floyd said. “The windows were tight. Guys weren’t just running around open, and he had to slip some throws in there. And he made some big plays with his feet, that’s not something we’ve had to do so much this year, but he made some big runs.”

The Jaguars (6-5) received the ball to start the second half, but Christian Renda collected a fumble early in the Jags’ drive. Tyson hit Pitts for a 26-yarder deep into Spain Park territory.

Tyson made a tough run, using all of his 6-foot-4 inches and 218 pounds to bull through the grappling Jags for a 3-yard touchdown. Colburn made it 17-0 with 9:06 remaining in the third.

But Jags quarterback Braxton Barker brought his team back, hooking up with JoJo Dennis and Michael Rogers twice with passes. Barker, the son of former Husky standout Jay, capped the drive with a 6-yard run. Cole Starr’s PAT cut the margin to 10, 17-7, with 5:15 left in the third.

The Huskies answered right away. Spain Park tried an onside kick, but the Huskies jumped on it. Elliott McElwain burst 30 yards inside the visitors’ 20.

The drive stalled as Tyson was sacked, but Coburn, consistent all year, hammered home another field goal, this one from 31 yards, to make it 20-7.

The defense again snuffed out a drive, but the Jags’ punt rolled dead at the 7.

No matter. Tyson was picking the Jags’ secondary apart now. McElwain converted a third-and-1 with a burst through the defense for a 15-yard pickup.

Tyson connected with McElwain for 39 yards down to the 7 and found Pitts with a low bullet in the end zone for a 27-7 lead with 11:10 to go.

The more physical team usually wins, and the Huskies did that, finishing the Jaguars off with an 83-yard drive. McElwain, the Army commitment, went for 19, 4 and 1 yards on the ground, then caught a perfect pass down the seam from Tyson, smacked into and through a Jags defender for a 32-yard gain.

He finished it off with an 8-yard run on third down for the score with 1:40 to play.

“Elliott made some big plays for as, as he does every week,” Floyd said. “A couple of big runs in the last drive, and not as many catches as he sometimes makes, but the ones he had were huge.”

The Huskies have another big step to take in the playoffs. The Huskies will host Hoover in Round 2, the quarterfinals of the four-week second season. The Bucs ripped Sparkman 49-7 Friday night.

“If you’re going to make a run in this thing, somewhere you’ll have to go through Hoover,” Floyd said. “They’ve been the king in this state for a long time. It’s going to be fun for our kids, and we’re exciting to try and prepare for them.”

Kickoff will be at 7 p.m. Friday at Hewitt-Trussville Stadium.