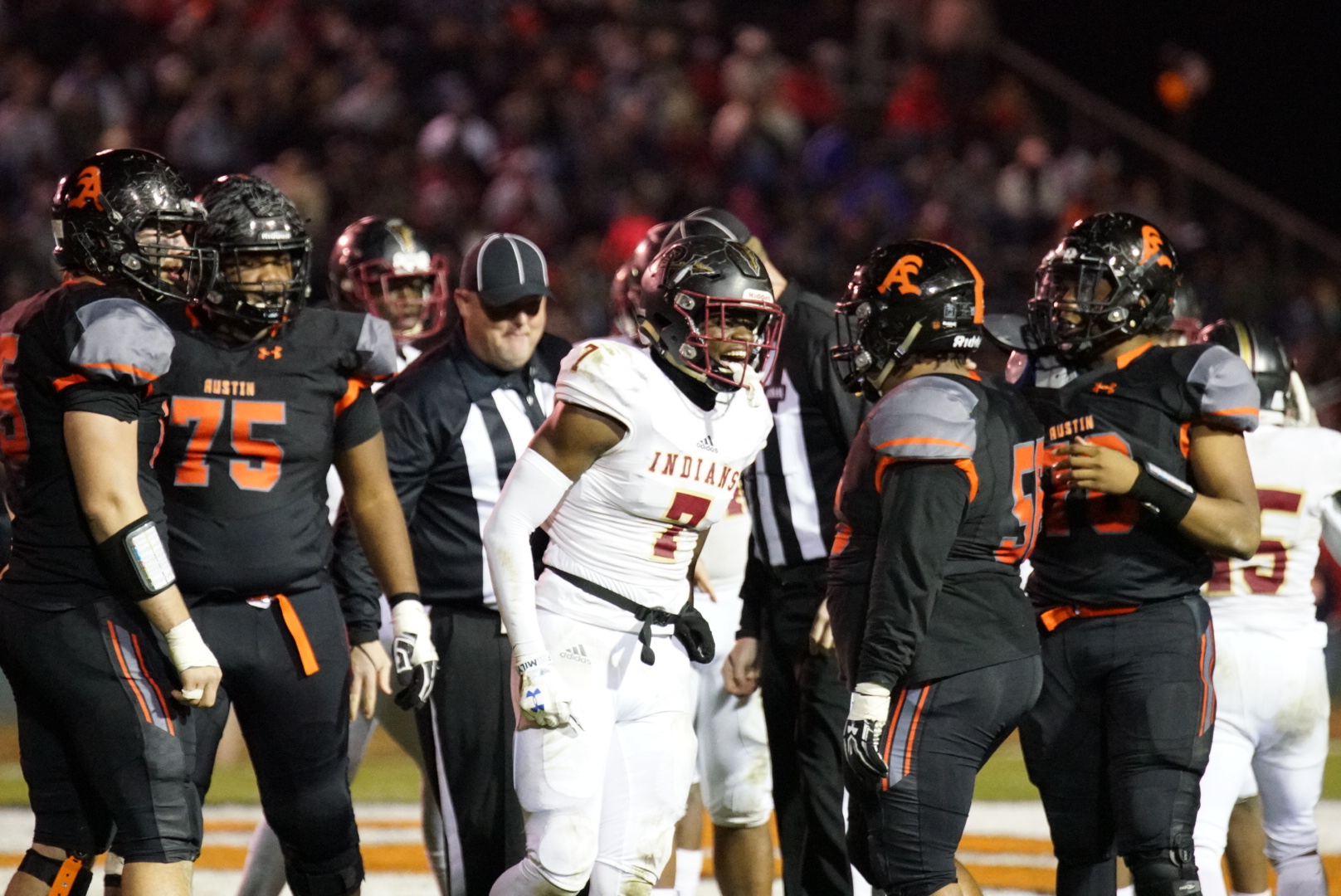 Pinson Valley's Jackie Matthews reacts after a play during Friday night's game between the Indians and Austin. Photo by Danny Joiner / Special to The Tribune

The Indians and Black Bears both came into the contest undefeated at 12-0 and represented two of the best football teams Class 6A in Alabama has to offer.

For Pinson Valley, it was also a chance to earn a little redemption. The Indians were 0-2 all-time against Austin coming into the game. The Black Bears knocked the Indians out of the playoffs each of the previous two seasons.

It was also fitting that it would take extra time and two huge two-point conversions to decide a winner in such a contest.

When the dust finally settled it was Pinson Valley that prevailed over Austin 51-50 in an instant classic.

“That was a great football team on the other side of the ball. They are very physical, and very well coached. We were out coached tonight and still somehow found a way to win. They did a great job. I’m very proud of our kids.”

Austin was led on the ground by four-star Auburn commit Asa Martin. A 59-yard rushing touchdown put The Black Bears up 7-0 with 6:43 left in the first.

Austin made a surprise onside on the ensuing kickoff and recovered to keep the ball out of the Indians’ hands.

“I told our kids we’ve been there before,” Coach Nix said. “Ramsay jumped on us 14-0 early in the season. We have been in some tight games. We were down to Clay. It’s not something we hadn’t experienced before. We just had to settle down and keep playing.”

Pinson Valley finally got to go on offense after the kickoff. The drive culminated in a 17-yard touchdown pass from standout quarterback Bo Nix to Liallen Dailey. The PAT cut Austin’s lead to 14-7 with three minutes left in the opening quarter.

The Black Bears scored again to end the first period up 21-7, but the Indians answered two minutes later on a short touchdown pass from Nix to Christian Hopkins to make it 21-14.

A 33-yard rushing touchdown and two-point conversion gave Austin a 29-14 lead with 8:14 left before halftime.

Nix capped the Indians’ next drive with a 12-yard touchdown pass to Jaytorian Sharp, with the PAT narrowing the gap to 29-21with six minutes remaining before the break.

The Black Bears notched another long touchdown run, this one from 67 yards out, to extend their lead to 36-21 with 4:34 left in the half.

Pinson Valley drove to the goal line and ended the drive with a short touchdown from Nix to Orion Morris to set the halftime score at 36-28 with Austin ahead.

The first half was a shootout, but the Black Bears came out of intermission with the goal of grinding out yards on the ground and chewing up clock.

Austin’s first possession of the third quarter last almost eight minutes, but an interception by Rhasaan Christian gave Pinson Valley the ball at the Austin 46 with 3:39 remaining in the period.

The Indians made the Black Bears pay for the turnover when Nix found Morris for a 39-yard catch and score just a minute later that cut Austin’s advantage to a single point at 36-35. This scoreline remained until the end of the third quarter.

The Black Bears used nearly four minutes of clock in their next drive, which ended in a 9-yard touchdown pass and a 43-35 lead with 8:20 left to play.

The Black Bears made another surprise onside attempt on the ensuing kickoff and once again recovered to regain possession at the Indians’ 45-yard line.

Auston drove the ball to the 12, but Pinson Valley forced a fumble and recovered to keep the Black Bears out of the end zone with five minutes left to play.

“For us to be able to win the game losing two possessions is incredible,” Coach Nix said. “Hats off to our defense for being able to hold them there at the end of the game and keep them from scoring.”

Time was winding down, and the Indians found themselves on a fourth-and-4. Nix found Dailey for a clutch first down to keep the drive alive.

A few plays later Nix hit Dilan Henderson in the end zone from 10 yards out for a touchdown. Pinson Valley would have to go for two in an attempt to tie the game with only 2:38 left.

Nix found Sharp who ran into the end zone for the conversion, and the game was tied at 43-43.

Between the kickoff return and a few big plays Austin drove the ball to the Indians’ 16-yard line with 46 seconds remaining in regulation.

The Black Bears made it to the Pinson Valley 9-yard line and called a timeout with 25.6 seconds left.

The Indians’ defense brought down the ball carrier in the backfield on the next play, so Austin was content to let the clock run down to 5.4 second left, use its remaining timeout and try to win the game with a 29-yard field goal.

Pinson Valley used its final timeout in an attempt to ice the Black Bears kicker, then after the pause in play Austin took the field for the try.

The kick sailed high and fell well short of the uprights as time expired. This game would be settled in overtime.

Pinson Valley began extra time on defense, but not for long. Austin scored on a 10-yard touchdown pass in the first play of overtime, with the PAT putting the Black Bears ahead 50-43.

The Indians answered right away, with Nix connecting with Dailey on a 10-yard touchdown pass on the first offensive snap of the extra period for PVHS.

Coach Nix called a timeout after the score to give himself and his staff a little more time to think about the team’s next move. Pinson Valley elected to go for a two-point conversion to try and win the game.

“There was a little bit (of question), but once we got down there and saw the situation it was just the right play for the right time. We needed to go ahead and try to end it right there,” Coach Nix said.

So, win or lose, the Indians’ offense trotted out onto the field for the last time in the contest.

Nix looked right after the snap but did not like what he saw. He then looked left and saw Henderson.

Nix lasered the ball to Henderson, who made the catch, took two steps and ran into the end zone just past the pylon.

It took all of regulation and one overtime period, but Pinson Valley earned the victory and a spot in the 6A state semifinals.

“He has unbelievable awareness, and he’s an unbelievable player,” Coach Nix said of his son Bo. “I’m super glad he’s on our team.”

“That’s part of it,” Coach Nix said. “That’s who we have next. We know how good they are, and they know how good we are. I know they are dying to get us again, and I don’t think our guys will back down at all from the challenge. It’s going to be a great match of two excellent football teams.