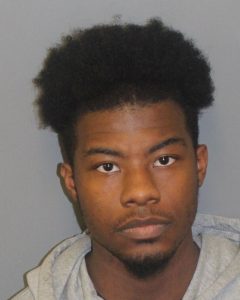 CENTER POINT — A 22-year-old McCalla man has been charged with the alleged burglary of a residence in the 2300 block of Spencer Lane in Center Point after leaving his driver’s license with the stolen property, according to the Jefferson County Sheriff’s Office.

On Jan. 10, 2018, deputies were called to a home in the 2300 block of Spencer Lane to investigate a report of a residential burglary. The victim reported that he had arrived home to find that his home had been burglarized, and his television and a handheld gaming device had been stolen.

While deputies were on the scene, they learned that a witness had reported that, while walking his dog, he had seen a man carry a large television into a house across the street. They went to this home and found the front door slightly open. They called out to anyone inside the home but received no answer.

To make sure that this home had not been burglarized as well, deputies entered and checked. While inside, they discovered the television that had been stolen from the original victim and a driver’s license belonging to 22-year-old Dekorian Faatih Vanderbilt of McCalla. A search warrant was obtained for the home and deputies recovered the stolen television and the driver’s license.

Vanderbilt was identified from the license as the suspect seen carrying the television across the street.

22-year-old Dekorian Vanderbilt remains at large. Anyone with information on his whereabouts is asked to call the Jefferson County Sheriff’s Office at 205-325-1450 or Crime Stoppers at 205-254-7777.