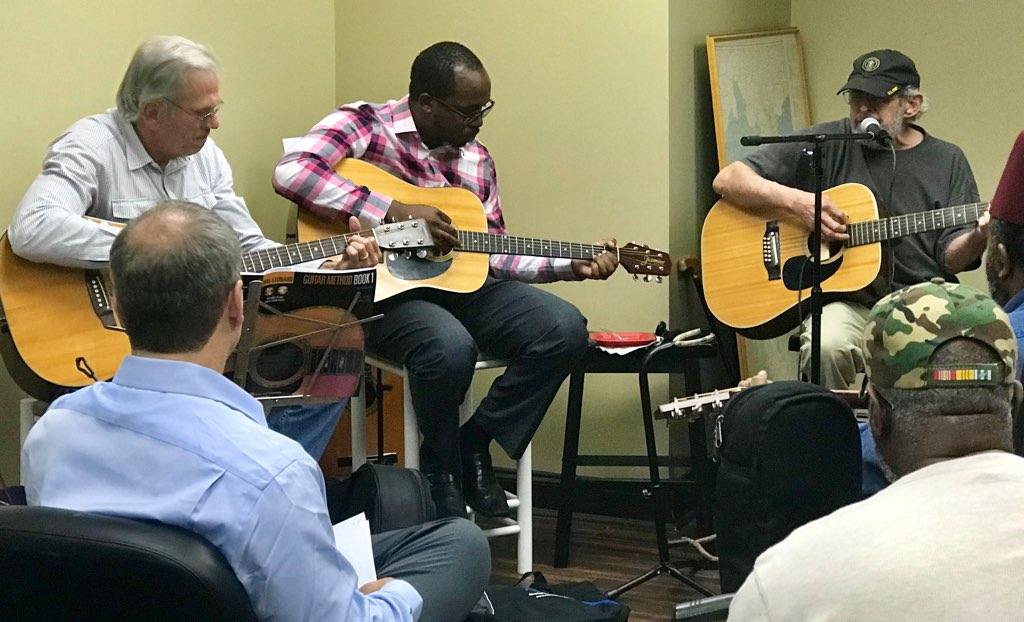 TRUSSVILLE – You’ve probably heard stories of some veterans struggling to make ends meet after they’ve returned from overseas. Many of them have been afflicted with PTSD, physical wounds or other conditions from combat and it’s not uncommon to see them living homeless on the streets. Some of them are only a step away from homelessness.

There are different ways for veterans to cope with what they’ve been through. Some turn to art, while others take up writing or any number of hobbies. Another is music.

One of the benefits of playing music is that it has a therapeutic effect, according to Tara and Bruce Bentley of Guitar Pros in Trussville. They have been involved in helping veterans by donating guitars but they’re not in it alone. People throughout the Trussville community have pitched in with donations of instruments so veterans can take part in music therapy.

“Music gives you discipline,” said Tara Bentley. “Because you have to practice or you don’t get good at it. And everyone wants to be good at it, right? So it gives you discipline and it occupies your mind and keeps it off of other things. A lot of these guys are going to PTSD and so they have to have something that gets their mind off of things they’ve been through.”

They help by supporting the Birmingham chapter of the non-profit organization, Guitars for Vets. The organization has a program where veterans can sign up for guitar instruction. Those who graduate the program are given guitars along with stands for free.

The owners of Guitar Pros, along with their friends and family in the Trussville area, have donated guitars – some used, others brand new – to the program in support of veterans. Judy Hughes, a violin teacher at Guitar Pros, is a veteran who is active in the Guitars for Vets program. She introduced the Bentleys to this effort.

Hughes and others who have donated were prompted by the state of some veterans living in the Birmingham area.

So the idea is to help by getting them involved in activities like music where they can get together and play. Bruce Bentley described an event that he was at where veterans came together and the atmospheric went from somber to upbeat once the music got going, rocking out with songs ranging from classic rock to country.

Little things like this can make all the difference in the world for those struggling day by day, Bruce Bentley said.

“They just don’t have anything,” said Bruce Bentley. “There’s not a lot for them at these places they live in. It’s like they’re just forgotten. They should be treated a little better than that. These guys put their life on the line for us and they’re out there with nothing. We want to do what we can to help them.”

Anyone who is interested in helping out can visit www.guitars4vets.org.