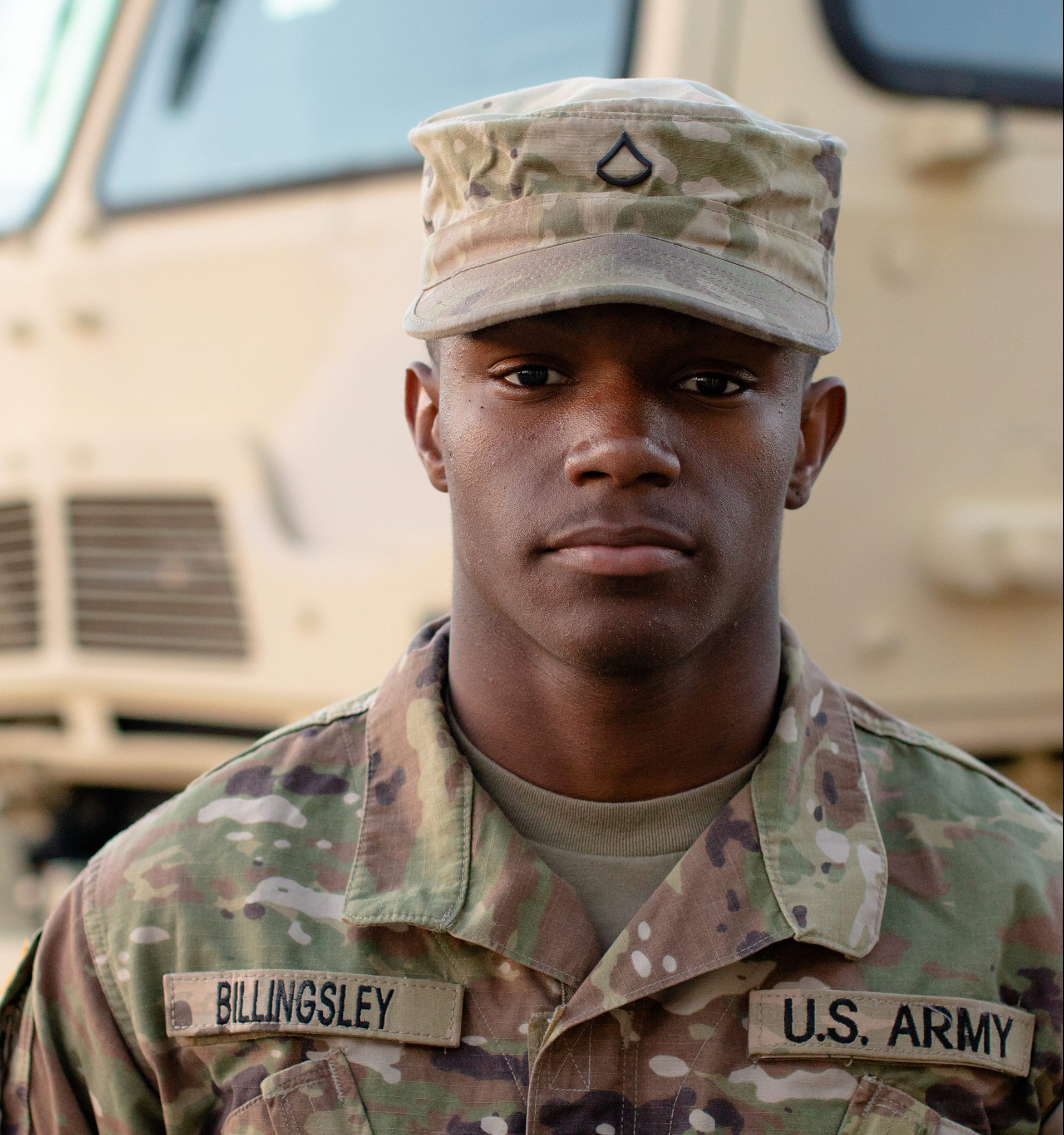 MONTGOMERY –  Rashad Billingsley enlisted in the Alabama Army National Guard as an 88M – Motor Transport Operator in March  of 2017, with dreams of following in his truck-driver father’s footsteps. He said he always expected to one day parlay his military training and certifications into a commercial driver’s license and profitable career, but he never anticipated needing it to save a life here at home. 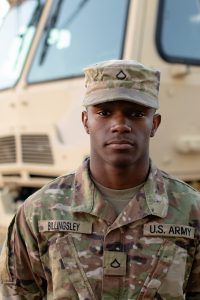 On Nov. 22, less than a year out of Initial Entry Training, the 18-year-old private first class, currently assigned to the 2025th Transportation Company out of Jacksonville, said he was Black Friday shopping at the Riverchase Galleria mall in Hoover with his cousin and a few friends when he heard two distinct gunshots over the sound of the crowds.

A few seconds passed, then he heard two or three more.

“At that point, everybody was running and screaming,” he said. “It was chaotic. And that’s when I crossed (the injured girl’s) path. They were screaming ‘(she’s) hurt, (she’s) hurt,’ so I stopped and told them I could help.”

The 12-year-old girl, running with her sister and grandmother, had been shot in the back, though she hadn’t realized it at the time and only remarked that it “hurt.” Billingsley, however, recognized right away.

“I cleaned off as much of the blood as I could with what I had,” he said. “Then a police officer came up and I asked him to grab me a shirt off a rack nearby and I used it to apply pressure and try to slow her bleeding.”

Billingsley said he kept her calm and stable, holding pressure on the wound until paramedics arrived to transport her to the emergency room. Billingsley said he also accompanied her sister and grandmother to the ambulance to shield their view from bodies on the floor nearby.

Billingsley’s parents and unit leadership both said they were unsurprised to hear how he responded in the moment.

“We’re very proud of him, but not surprised,” his mother, Amanda Billingsley, said. “That’s just the type of young man that he is, and we’re thanking God he was at the right place at the right time to help.”

“When I got the call that he was the one involved in this incident, I was immediately proud to know him and share a unit with him,” Harkins said. “Even from my first impressions of Pfc. Billingsley, he’s just been that kind of guy, but I think that would also be the reaction of most Alabama Guardsmen in that moment.

“That’s what we’re trained for, and that’s what these guys live to do. They’re always volunteering for any missions, they love their country, love their community, love to do their part and they love to serve the people around them. Pfc. Billingsley did a heroic and outstanding thing and, while I certainly can’t take any credit for it, I’m proud to be his commander.”

Billingsley, however, never used the word “proud,” saying, instead, that he is simply “grateful.”

“I’m just glad I could help her out,” he said, “glad God put me there in that moment, and glad I had the training I needed so I could potentially help save this girl’s life.”

Ultimately, he said, it was that training that made the difference. He admitted he is not a medic or even Combat Life Saver-certified, but feels the soldier-level combat casualty care training drilled into him since his first unit of assignment had “fully prepared” him to act quickly and appropriately.

“It was just natural,” he said. “It all clicked in the moment. I didn’t panic, I knew what to do and I just acted.”

Billingsley said he is trying to stay humble in the midst of media attention and tries not to bring it up, but he is quick to encourage others to get the same training.

“A lot of people my age say, ‘Oh, I’m gonna try to do this or that, but I’ll keep the military as a plan B,’ but I always tell them, ‘no, the military really can be plan A,'” he said. “You get the best training on so many things; it really opens up a lot of opportunities to do good for yourself and maybe someone else, too.”

Billingsley said he has been in constant communication with the young girl he helped, as well as her family, and is happy to see her recovering. He looks forward to life returning to normal for himself and for her.

Harkins said Billingsley is expected to be promoted to the rank of specialist in January 2019, and he wouldn’t be surprised to see Billingsley receive official military recognition for his actions.