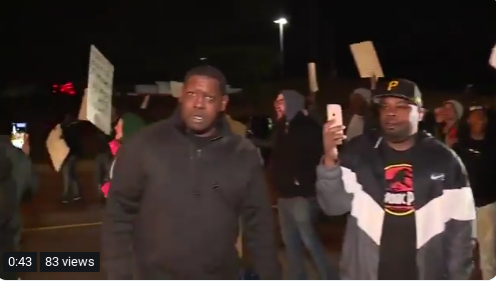 HOOVER — In a statement released on Tuesday, the Birmingham Justice League said the group is temporarily suspending protests in the city of Hoover after meeting with Mayor Frank Brocato and City Manager Allan Rice.

The group has been protesting the death of Emantic “EJ” Bradford at the hands of Hoover Police in the Galleria on Thanksgiving night.

“The Justice League was given an audience by Mayor Frank Brocato and City Manager Allan Rice at which time our concerns with the City of Hoover and the Hoover Police Department were discussed,” the statement said. “We have come to common ground on enough of those concerns that we are willing to call off tonight’s planned protests throughout the City of Hoover and most specifically at Mayor Brocato’s home. We are calling for a press conference on tomorrow (with a time and location to be determined) to discuss our dialogue and lay out a framework for a better working relationship between citizens and law enforcement.”

The protest have been carried out in multiple Hoover businesses and have included stopping traffic on U.S. Highway 31 and Interstate 459. Six of the protesters have been arrested in recent weeks, including protest leader Carlos Chaverst Jr., who faces five charges.

The statement then turned to additional objections that the group has with the ongoing investigation into the shooting.

“In the meantime, we join the family of Emantic Fitgerald Bradford, Jr. in calling for Alabama Attorney General Steve Marshall to return authority of the investigation, and the determination of any possible prosecution(s), to Jefferson County by allowing Bessemer Cut-off District Attorney Lynneice Washington to be in charge of the “EJ” Bradford case,” the statement said. “It is hypocritical, and disrespectful, for the Attorney General not to take the word of a sworn officer of the court (that Mr. Carr has no relationship with the protest leader) then claim himself to also be the decision maker when challenged by the exact same evidence (that being pictures with protest leaders, Carlos Chaverst and Le’Darrius Hilliard).”

Attorney General Marshall took over the the case after being notified by District Attorney Carr of perceived conflicts of interest in the case.

Marshall said the decision was normal protocol and noted that Carr did not request to be recused and believed he could continue to handle the case without bias.

Marshall responded to earlier objects from the Bradford family attorney that he return the case to Jefferson County with a statement on Monday.

“As the written correspondence reflects, Jefferson County District Attorney Danny Carr directly conveyed to Attorney General Marshall the presence of Carr’s perceived conflicts in this matter,” the statement from Marshall’s office said. “Attorney General Marshall acted on standard procedure to assume prosecution. The Attorney General’s Office will ensure that the Hoover mall shooting cases are handled with the highest degree of fairness and professionalism as we pursue justice for all parties.”