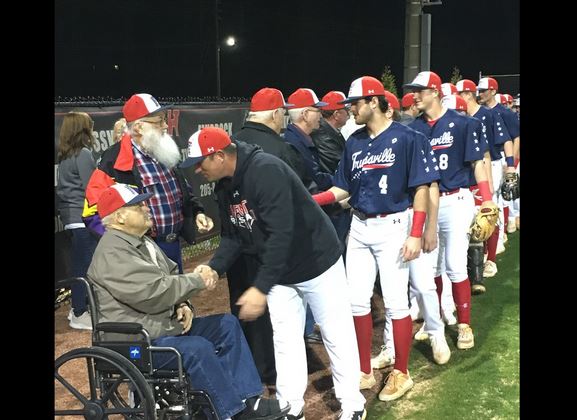 The crowd at Phil English Field erupted into cheers and heavy applause on Monday night as veterans of the United States military were escorted onto the field by each and every Husky baseball player.

See Related: Husky Baseball to honor our veterans at Monday’s Game Against Pinson 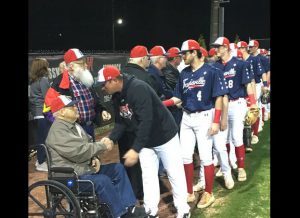 Once positioned, the veterans, ball players and attendees faced the American flag while Hewitt-Trussville student Anna Katherine Summers performed a stirring rendition of the national anthem, after which, the crowd once again honored the assembled veterans with cheers and applause.

“This is to show our appreciation for what they have done for our county,” said Hewitt-Trussville Baseball Coach Jeff Mauldin. “We want to thank them.”

Hewitt-Trussville’s opponent for the evening also took part in the pre-game ceremony with several of their players escorting a veteran onto the field.  The event was especially meaningful for Pinson Valley High School senior Blaine Crawley.  Crawley, an 18-year-old who pitches and plays outfield for Pinson Valley, has enlisted in the Air Force.

“His older brother Lance Crawley, who graduated from PVHS in 2016, is currently serving in Germany,” said Crawley’s mother, Kristy Hayes. “Blaine has a love for baseball, but decided to follow his heart and wanted to join in serving alongside of his brother.  So, I will have two sons serving!”

The Huskies defeated Pinson Valley 10-0 to improve to 3-0 on the season. Junior Tyler Mauldin pitched a complete game and threw a no-hitter. Mauldin struck out 11 Pinson Valley batters on the night. Hewitt-Trussville opened the scoring in the 3rd inning when Creed Parker doubled to lead off. Hudson Boren singled to right field to drive in Parker. In the 4th inning, Parker was hit by a pitch with the bases loaded to make the score 2-0. Boren singled again to give the Huskies a 3-0 lead.

Mauldin’s team put the game away in the 5th inning as they scored seven runs. For the night, Hudson Boren had three hits and four RBI’s. Creed Parker had two RBI’s, and Jacob Bishop added a double and two RBI’s.