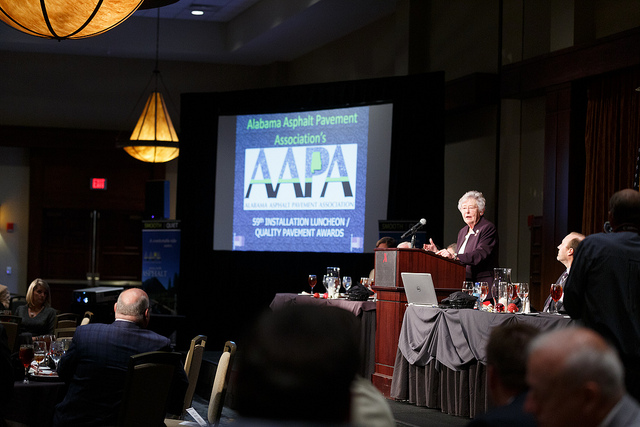 Gov. Ivey speaks to the Alabama Asphalt Pavement Association in 2018. Photo via the Governor's Office

MAPLESVILLE — Governor Kay Ivey proposed a 10 cent per gallon increase in fuel tax as she unveiled her Rebuild Alabama Infrastructure plan at a stop in Maplesville this week.

Ivey is promoting the tax increase be phased in with an immediate 6 cent per gallon hike and 2 cents to be added next year with another 2 cent per gallon increase in 2021. The current state gas tax, which has been in place since 1992, is 18 cents per gallon. There are additional federal, county and city gas taxes already in place.

The gas tax increase is supported by several road building industry lobbying groups, as well as several chambers of commerce. 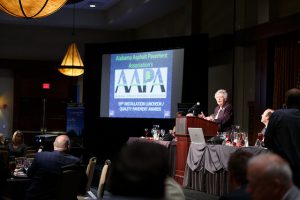 Gov. Ivey speaks to the Alabama Asphalt Pavement Association in 2018.
Photo via the Governor’s Office

The governor has indicated that she will call a special session of the legislature to deal with the proposed tax hike.

Under Ivey’s plan, the tax is expected to raise about $320 million per year in additional revenue when fully implemented. The state would retain 60 percent of the revenue with counties receiving 25 percent and cities splitting about 8 percent. An additional 7 percent would be used for improvements to Mobile Bay.

“My Rebuild Alabama Infrastructure Plan is a comprehensive approach to a glaring issue affecting citizens in every corner of the state,” Ivey said. “After 27 years of stagnation, adequate funding is imperative to fixing our many roads and bridges in dire need of repair. By increasing our investment in infrastructure, we are also making a direct investment in public safety, economic development, and the prosperity of our state.”

But everyone is not on board with Ivey’s plan.

Pepper Bryars of the Alabama Policy Institute suggested in an op-ed published last week that any increases in gas tax should be offset by a decrease in other taxes.

According to API, a statewide poll commissioned by the Alabama Forestry Association said 62 percent of those responding would support and increase in the gas tax if it were offset with a decrease in the grocery sales tax.

Alabama is one of 14 states that still charges sales tax on groceries.

The Alabama Republican Executive Committee has passed a resolution supporting the API plan of reducing taxes to offset any increase in the gas tax.