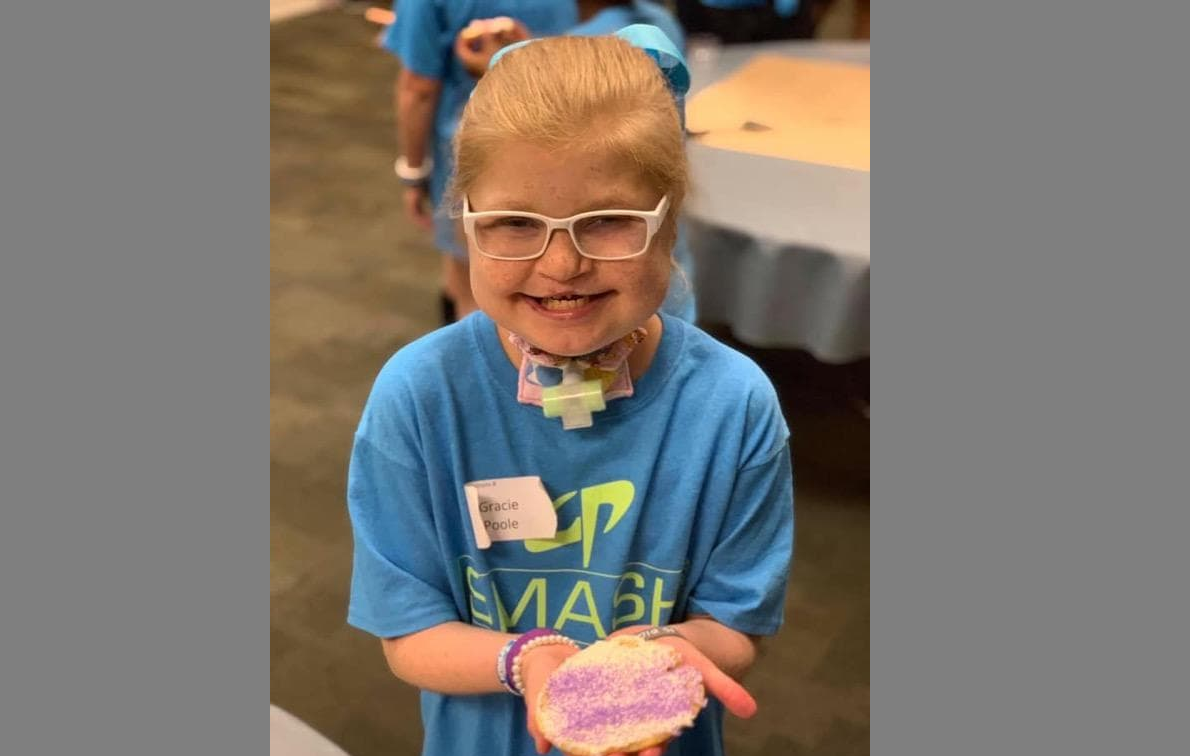 Gracie Poole is only 11 years old, but she has gone through more than most people go through in an entire lifetime. She was born one month premature and was in the NICU for the first three months of her life. After being sent home, Gracie developed respiratory syncytial virus, or RSV, when she was only three months old. The virus was the start of a long journey for the Poole family. Her mother, Jennifer Poole, was told there was no hope. 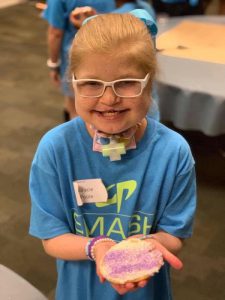 “Gracie spent her first year of life in the hospital,” said Jennifer Poole. “She came home at 11 months old and they told us we were bringing her home to die.”

Her pulmonologist, in Birmingham, kept telling the Poole’s there was something missing and he couldn’t’ figure out what it was. Little Gracie was in pain, she was getting sick often and she couldn’t do things she wanted to do with her siblings.

“She’s the youngest of our six children,” Jennifer Poole said. “Which, one of them was stillborn but the others are perfectly healthy. In her mind, Gracie’s just as normal as they are, but she turned blue when she played with them.”

So, Gracie was referred to Texas Children’s Hospital, where specialists took her case. That’s when the missing piece was found. Gracie had filamin A gene mutation, which causes lung disease and other life-threatening illnesses.

Back and forth to Texas Children’s, they went. For five years, the family had to take exhausting and expensive trips to the doctor. Finally, Gracie was referred for a lung transplant. After three lung-reduction surgeries left Gracie with only 50% of one of her lungs, a transplant was the only option. She was added to the transplant list in September of 2017.

That’s when the Poole’s made the move to the Lonestar State. But the time there wasn’t easy. The Poole’s experienced heartbreak during their time waiting for a new lung. Twice, the family was told a donor was found. Gracie was brought in both times and prepped for surgery, but it never happened.

“Gracie asked me to take her to the bathroom and she just burst into tears and she said, ‘Mommy, I suddenly don’t feel so brave anymore,” said Jennifer Poole. “It broke my heart and made me have a small glimpse all at the same time of what her little mind must have gone through over and over in her 11 short years of life, all because we have always told her she’s the bravest girl we have ever known.”

But Jennifer said it is not unusual to go through the process then be told the organ is not going to work.

“A lot of people go through it more than twice, so we were blessed,” she said. “They want the lungs to be perfect, which they should be. So, if they find anything wrong, you go through all of that and then find out it’s no good.”

The Poole’s were told when they were put on the list that a so-called “dry run” was possible. But Gracie’s mom said there was no way to prepare for such a let-down.

“Gracie was so excited, it makes me cry to think about it,” she said. “It was just so exciting. Then, we got there and we go through all the prep. You go through the craziest emotions. You’re excited, but you’re sad for the donor family, then you’re scared. It’s every emotion you could ever dream of … but then to be sent home, that’s just awful. Gracie and I cried for days.”

But finally, there were healthy lungs available. On June 8, 2018, the Poole’s got the call. They once again packed up their things and headed to the hospital. Gracie was put through preparations for the transplant and, this time, the lungs were a perfect match.

A little boy in North Carolina tragically lost his life after suffering rupture of a cerebral arteriovenous malformation, also known as an AVM. Although Cody Clarke, 13, was likely born with the malformation, he had never had any symptoms, so his sudden death was unexpected.

Aaron and Michele Clarke, Cody’s parents, have expressed how proud they are that Cody was able to save lives. His organs have been used for at least four people.

“We are so excited a part of Cody still walks this earth!” Aaron Clarke posted on Facebook. “He is looking down at Gracie with his huge smile! Cody knows she is taking good care of her new lungs and is so happy he was able to help someone here on Earth even though he is in Heaven. We are honored to know Gracie and love her already because she has our Cody inside her!!”

Gracie’s transplant surgery took 14 hours to complete. The transplant was more difficult for surgeons because Gracie had already undergone lung reduction surgeries, which made her lungs collapse twice. After the lung collapses, doctors had to connect her lungs to her chest cavity.

“So, the surgeons in Texas literally had to scrape her lungs out a piece at a time,” said Jennifer Poole.

Gracie calls her old lungs her “dumb lungs,” and she’s happy to be able to breathe better than ever.

Gracie’s mom wants her daughter to have the best life possible. Although her immune system is compromised, Gracie is still able to get out and enjoy things.

“Before they even put us on the transplant list, we had to undergo psychological testing because they say ‘we do transplants so the child can have a normal life.’ So, even though it’s hard for me to send her to things like Vacation Bible School and other events, I know she deserves this,” Jennifer Poole explained.

Jennifer Poole reached out to the Clarke family to thank them for giving her daughter a second chance at life. She was able to make contact with them. They have shared pictures and memories.

“I have a child that age and it just makes it so surreal,” said Jennifer Poole. “Transplant guilt is a real thing and it’s a strange thing because you’re so glad that your child has a second chance, but at the same time, you feel guilty that somebody had to lose their child. I don’t know how people get through things like this without faith.”

Faith is something the Poole’s and the Clarke’s share. Jennifer Poole said the families want to tell others how important organ donation really is.

“There are so many people waiting on a transplant list,” she said. “It’s just sad to me that so many people don’t choose to be a donor. If you don’t donate them, they are just wasted.” 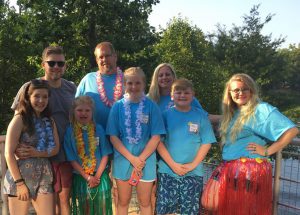 The Poole family was able to move back to Alabama this year. They are thankful to be near family and close friends. Gracie is thankful that she gets to play Just Dance on the Wii. Before the lung transplant, she could only dance to half of a song. Now, her mom says, she is able to dance to song after song. She also likes to play with her bunny rabbit.

“Anybody that gets to know Gracie and gets to know her story, she just blesses you,” said Jennifer Poole. “After all she’s been through, she just goes on and keeps persevering.”

Now that Gracie doesn’t have to carry around a ventilator, she is able to do things she wasn’t able to do before the lung transplant. For example, her big brother was recently able to take her for some ice cream.

“She smiled the whole way up the road when she left with him,” Jennifer Poole said. “She smiled for two days after, too.”

The Poole’s are in the process of decorating Gracie’s room with a Wonder Woman theme.

Gracie has thrown the first pitch for the UAB Blazers and for the Birmingham Barons and has gotten to experience things some children never get to experience.

Although many of Gracie’s wishes have been granted, there is one thing she would like to accomplish. She is a big fan of Willie Robertson from Duck Dynasty. The family has been to Duck Commander dozens of times but has never been able to meet him.

“Obviously, in my opinion, if anybody deserves to have a wish like that granted, it’s this little warrior over here,” Jennifer Poole said.

Jennifer is also a fighter. Throughout the fight for her daughter’s life, her husband, Brian, found out he had a brain tumor. 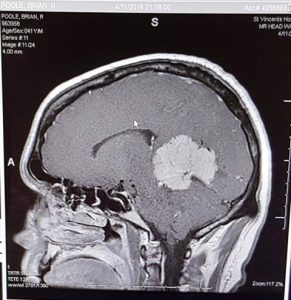 “He went to Dr. Steele for an eye exam and Dr. Steele sent him to the emergency room,” said Jennifer Poole.

After examinations, doctors found Brian had a tumor between the size of a lemon or an orange, sitting on his optic nerve. He had surgery to remove the tumor, but after 18 hours, surgeons were only able to remove half of it. Three hours after surgery, Brian suffered a stroke.

Before the surgery, Brian worked with a company that was contracted by Children’s of Alabama to make prostheses and back braces for kids. The orthotists/prosthetist is now unable to go back to work.

Meanwhile, the Poole’s know Gracie is not in the clear. Jennifer said doctors told her Gracie’s illness will require a lifetime of treatments.

Gracie takes 28 medications a day through a feeding tube. The medications have impacted her kidneys, causing her to be at risk of chronic kidney disease.

“Her kidneys have just really taken a blow, Jennifer Poole said. “We flush her with her feeding tube with 2700 milliliters of half water and half Pedialyte a day and her kidneys still aren’t what they’re supposed to be.”

Gracie will also have medical bills for the rest of her life. Stacey Allen, who knows the Poole’s from church, has dedicated her time to help raise money for Gracie.

“Gracie’s had a long road, but she’s still got a long road to go,” said Allen. “Having a healthy child, we don’t realize how many financial burdens this type of thing can come with.” 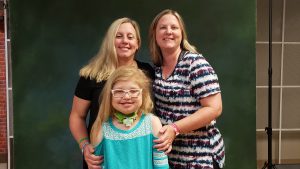 The Children’s Organ Transplant Association (COTA) is an organization that helps with fundraising efforts for children and young adults in need. Every cent donated through COTA goes directly to transplant-related expenses. Allen has organized a car show and silent auction fundraiser for Gracie’s COTA account.

Allen said the community has come together to make the fundraiser a success. The event will be on Saturday, Aug. 10, from 9 a.m. – 2 p.m. at Clearbranch United Methodist Church in Trussville. Registration begins at 7 a.m. There will be items up for auction including Vera Bradley bags and a party for eight at Spare Time in Trussville. For more information, contact Stacey Allen at (205) 807-8077 or at sunshine71179@gmail.com.

You can also donate directly to Gracie’s COTA account at cota.org/campaigns/COTAforGracieP.

In the meantime, Gracie will continue to fight hard and breathe easy.