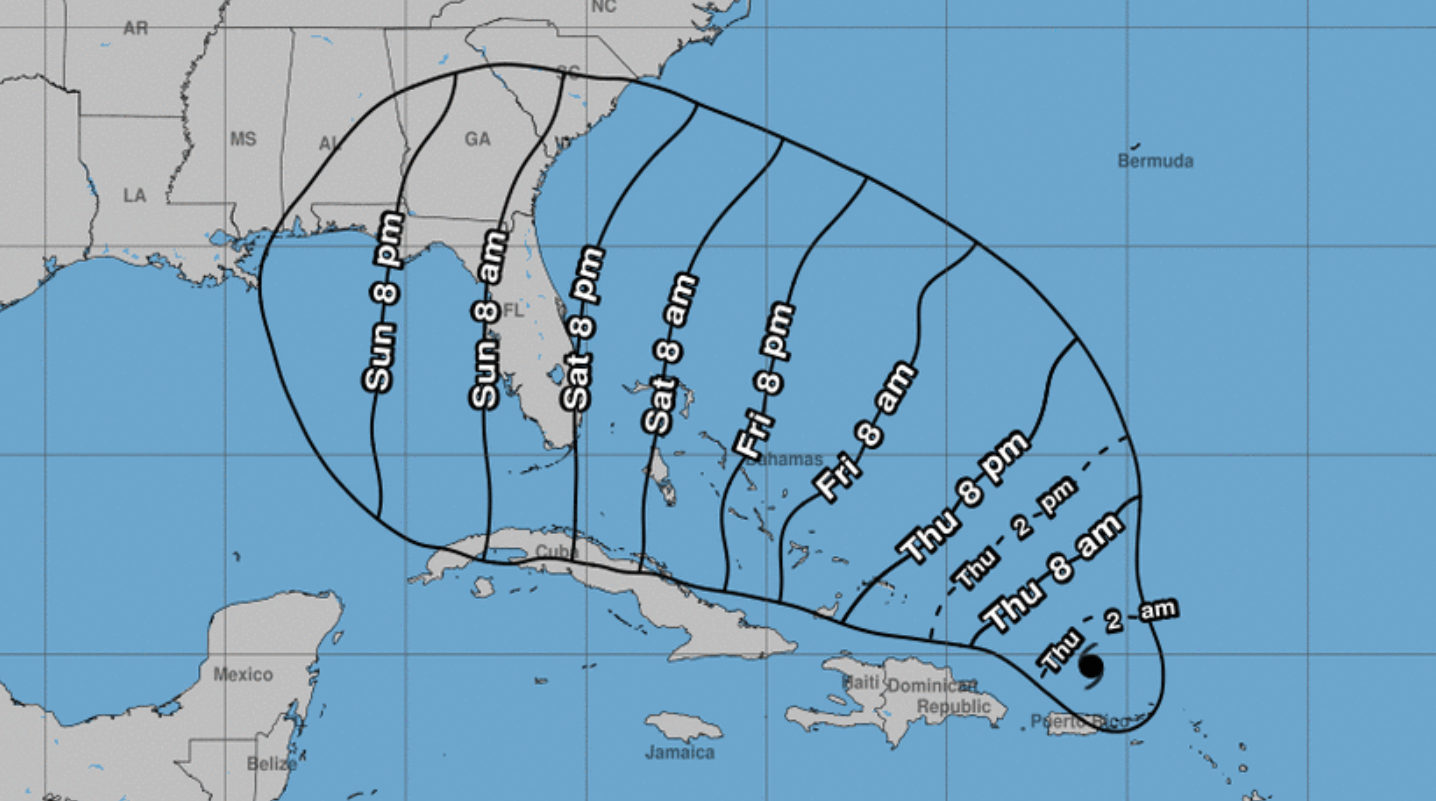 MIAMI (AP) — Leaving mercifully little damage in its wake in Puerto Rico and the Virgin Islands, a strengthening Hurricane Dorian posed an increasing menace to Florida on Thursday as it swirled toward a possible direct hit on the state over Labor Day weekend.

Along much of Florida’s east coast, shoppers rushed to stock up on food and emergency supplies at supermarkets and hardware stores and picked the shelves clean of bottled water. Lines formed at service stations as motorists topped off their tanks and filled gasoline cans.

Forecasters said Dorian is expected to bulk up into a dangerous Category 3 storm, meaning winds of at least 111 mph (177 kph), or perhaps even a catastrophic Category 4, at 130 mph (209 kph) or more, before broadsiding the U.S. on Monday somewhere between the Florida Keys and southern Georgia — a 500-mile stretch that reflected the high degree of uncertainty this far out.

President Donald Trump said Florida is “going to be totally ready.” He tweeted: “Be prepared and please follow State and Federal instructions, it will be a very big Hurricane, perhaps one of the biggest!”

Josefine Larrauri, a retired translator, went to a Publix supermarket in Miami only to find empty shelves in the water section and store employees unsure of when new cases would arrive.

“I feel helpless because the whole coast is threatened,” she said. “What’s the use of going all the way to Georgia if it can land there?”

Also imperiled were the Bahamas, with Dorian’s projected track running just to the north of Great Abaco and Grand Bahama islands.

The storm is expected to pick up steam as it pushes out into warm waters with favorable winds, said University of Miami hurricane researcher Brian McNoldy, adding: “Starting tomorrow, it really has no obstacles left in its way,” he said.

“If it makes landfall as a Category 3 or 4 hurricane, that’s a big deal,” he said. “A lot of people are going to be affected. A lot of insurance claims.”

At NASA’s Kennedy Space Center at Cape Canaveral, officials debated whether the mobile launch platform for the new mega rocket under development should be moved indoors.

Dorian blew through the Virgin Islands and Puerto Rico as a Category 1 hurricane on Wednesday.

Puerto Rico seemed to be spared any heavy wind and rain, a huge relief on an island where blue tarps still cover some 30,000 homes nearly two years after Hurricane Maria. The island’s 3.2 million inhabitants also depend on an unstable power grid that remains prone to outages since it was destroyed by Maria.

Several hundred customers were without power across Puerto Rico, said Ángel Figueroa, president of a utility workers union. Police said an 80-year-old man in the town of Bayamón died after he fell trying to climb to his roof to clear it of debris ahead of the storm.