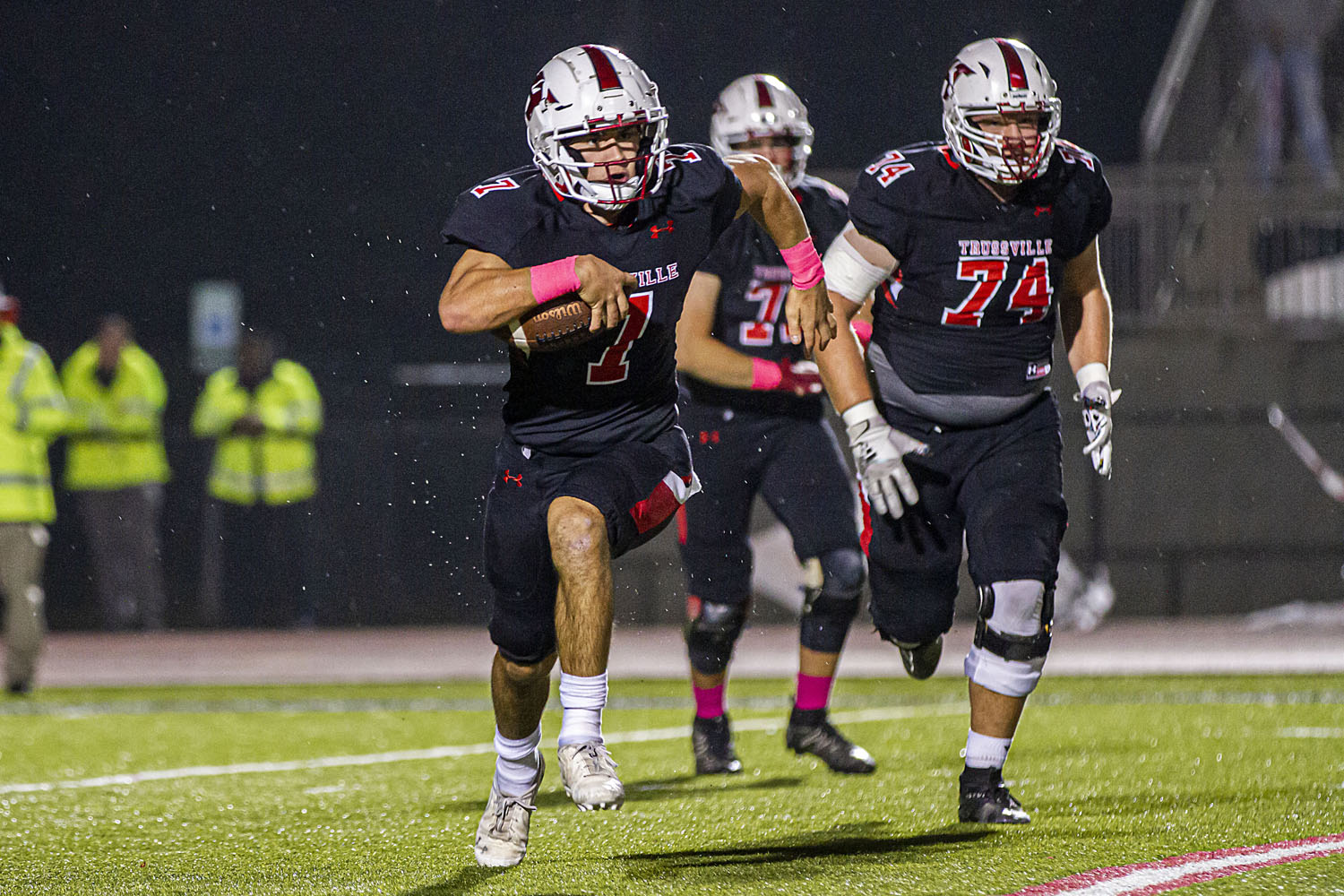 Hewitt-Trussville wraps season with dominant victory over overall No. 1 Thompson

TRUSSVILLE – On a night with no implications for Hewitt-Trussville, the Huskies played a game for the ages in a 35-29 victory over No. 1 Thompson on Friday that concluded the 2019 regular season in dramatic fashion.

Under a misty October sky, the Huskies shook off a season mired with injuries and just plain bad luck to compile 48 minutes of excellent football to stun the nationally ranked Warriors. Behind the stellar play of junior quarterback Jackson Holland, the havoc wrought by defensive lineman Justice Finkley, the explosiveness of wide receiver Omari Kelly and the clutch play of safety Malachi Moore, Hewitt-Trussville dispelled the notion that it did not belong with the top dogs in Class 7A, Region 3 and served notice that the Huskies are still a force to reckon with.

“We are a really good football team,” Hewitt-Trussville head coach Josh Floyd said. “For some reason, we lost some heart breakers. We did not have any breaks the whole year. That’s what happens. We’re excited for the future. We’re not going anywhere.” 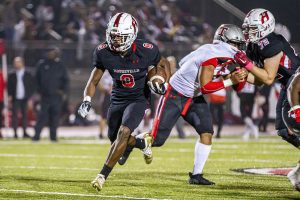 In a season where in which the Huskies opened with a 40-33 victory over two-time defending Class 6A champion Pinson Valley, it is more than fitting that Hewitt-Trussville capped off the season with a win over the best team in the state.

“This just creates great momentum going into next season,” Holland said. “I think we should have a great season next year.”

A victory was a distant thought to begin Friday’s game, however. Throughout the first eight minutes of the contest, Thompson controlled the momentum. The Huskies opened with two unsportsmanlike penalties within the first three minutes and watched their starting safety, Moore, crumble to the turf clutching his ankle.

The Warriors would jump on the board first after a 42-yard field goal midway through the first quarter. The Huskies’ offense struggled to move the ball early. After yet another punt, Thompson regained possession, marched down the field and scored on a 28-yard touchdown pass from quarterback Sawyer Pate to James Mitchell to increase its lead to 10-0.

Pate finished the night 17-of-32 passing for 196 yards with three touchdowns.

Hewitt-Trussville’s Cade Ott Carruth would replace Holland early in the second quarter. He proceeded to march the Huskies into the endzone after a 19-yard touchdown pass to receiver Dazalin Worsham, which narrowed Thompson’s lead to 10-7 with 10 minutes left in the first half. Worsham concluded his high school football career as the Huskies’ all-time leading receiver with 213 receptions for 2,344 yards and 27 touchdowns.

The Huskies’ defense would then start to assert themselves. 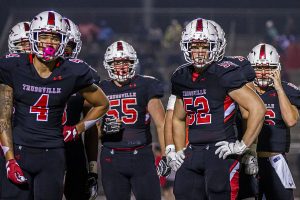 Following the touchdown, Hewitt-Trussville forced Thompson into a three-and-out following Finkley’s second sack of the game. That turnover on downs set up Kelly’s 41-yard go-ahead touchdown run with five minutes to go in the first half. Defensive back Samuel Jones then joined in on the fun with an interception of Pate with four minutes to go in the half.

Hewitt-Trussville’s offense could not be able to capitalize after the turnover, and the Huskies headed into the half nursing a 14-10 lead.

Thompson opened the second half with a 44-yard field goal with less than three minutes to go in the third quarter to narrow the lead to 14-13.

On Hewitt-Trussville’s following possession, Carruth injured his right shoulder and was replaced with Holland. The former third-string quarterback took the reins and then took control. On the first play following Carruth’s injury, Holland avoided a Thompson defender 10 yards behind the line of scrimmage, drifted to the far sideline and burst up the field for 27 yards.

Seconds later, Kelly would scamper 53 yards, which set up Holland’s 18-yard touchdown run to give the Huskies a 21-13 lead with two minutes to go in the third quarter. Kelly finished the night with three receptions for 112 yards.

“Jackson Holland, I am so proud of that kid,” Floyd said. “He’s got guts. He’s out there playing every other snap on defense and coming back and taking snaps (on offense). Nobody does that in 7A football.”

The Warriors responded in kind just seconds later on a 58-yard touchdown pass from Pate to again narrow the lead to 21-20. Holland would follow with an interception that was converted into a Thompson 42-yard go-ahead field goal.

Now faced with a 21-23 deficit, Holland shook off the miscue and hit Trey Washington on a 67-yard touchdown pass to give the Huskies the 28-23 lead with 4:52 left in the game. Holland completed 7-of-11 passes for 230 yards with two touchdowns. He added 87 rushing yards with one touchdown.

Thompson had one last gasp, but Pate was intercepted by Moore, an Alabama commit, who penned his final few plays in a Huskies’ uniform with a pick six and a subsequent onside kick recovery that sealed the deal.

Devoid of a playoff birth this season, Hewitt-Trussville can place a bow on a season that started off with much promise, devolved into a mid-season slog and wrapped up with one of the more stunning victories of the 2019 season.

“They say football teaches you about life all the time,” Floyd said. “We don’t always like going through those lessons, but I think it was a great life lesson for our kids to finish things right. We talked about finishing the right way, playing the right way and I’m just so happy to give our seniors a victory.”