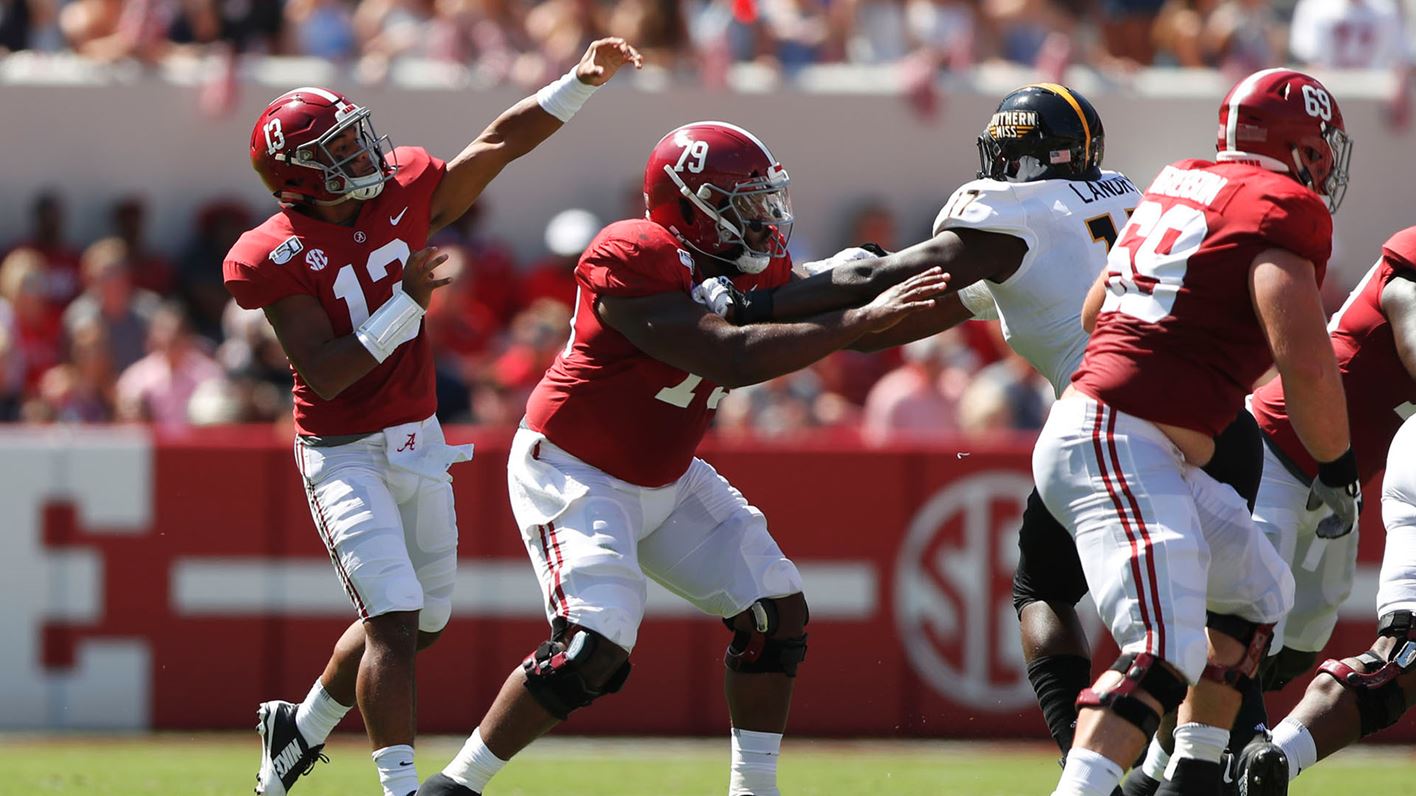 LSU tries to end its recent frustrating history with Alabama

Here are some things to watch during the 11th week of the Southeastern Conference football season.

GAME OF THE WEEK

No. 1 LSU (No. 2 College Football Playoff ) at No. 2 Alabama (No. 3 CFP): LSU (8-0, 4-0 SEC) is trying to end an eight-game skid in this annual series as Alabama (8-0, 5-0) seeks its 32nd straight home victory. These SEC West rivals are two of the nation’s highest-scoring teams, as Alabama ranks second in points per game (48.6) and LSU is fourth (46.8). This game also could have major Heisman Trophy implications for LSU quarterback Joe Burrow and Alabama quarterback Tua Tagovailoa, assuming Tagovailoa plays after missing most of the Crimson Tide’s last two games with a high ankle sprain.

MATCHUP OF THE WEEK

Alabama WR Jerry Jeudy vs. LSU CB Derek Stingley Jr.: We normally try to make sure the matchup of the week isn’t from our game of the week, but the LSU-Alabama showdown is big enough to warrant the extra attention. Jeudy won the Biletnikoff Award as college football’s top receiver last year and has followed that up by catching 52 passes for 682 yards and eight touchdowns this season. Stingley, a freshman, is tied for the SEC lead in interceptions (four) and leads the conference in passes defended (13). Alabama has so many outstanding receivers that Stingley could be assigned to many different guys at one time or another. But a potential Jeudy-Stingley matchup is particularly intriguing.

This will be the fourth time that LSU and Alabama have faced off in November as undefeated teams. It also happened in 1972, 1983 and 2011. Alabama won in 1972 and 1983, while LSU won in 2011. … Since 2008, Alabama and Florida are the only FBS teams that haven’t lost to anyone that finished the season with a losing record. The 10th-ranked Gators (No. 10 CFP) host Vanderbilt (2-6, 1-4) on Saturday. … In its 54-24 victory over Arkansas last week, Mississippi State gained 640 total yards and 460 yards rushing, which represented the Bulldogs’ highest totals ever for an SEC game in both categories. … Missouri has won nine straight November games heading into its Saturday trip to No. 6 Georgia (No. 6 CFP). … Georgia has allowed no touchdown runs all season. Every other FBS team has given up at least two touchdown runs. … Kentucky’s Lynn Bowden Jr. has 499 yards rushing over his last three games. That’s the highest total by a Kentucky player over a three-game stretch since Moe Williams had 564 in 1995. … Tennessee’s Bryce Thompson tied a school single-game record by intercepting three passes in a 30-7 victory over UAB last week. Thompson was the first Tennessee player to accomplish that feat since Deon Grant did it in 1999.

We were leaning toward making Tennessee over Kentucky our upset pick before the odds shifted in that one, as the Volunteers are now a one-point favorite after opening the week as a three-point underdog. Tagovailoa’s uncertain health status certainly makes it tempting to pick six-point underdog LSU to at least cover the spread against Alabama. Appalachian State is a five-point underdog that could give South Carolina all kinds of problems.

South Carolina’s Bryan Edwards will end his career as the most prolific receiver in school history. Edwards already has a school-record 225 career receptions. He also has 2,955 yards receiving to put himself well within reach of Alshon Jeffery’s career record of 3,042. His 21 touchdown catches are two off the school record shared by Sidney Rice and Jeffery. Edwards tied a school single-game record last week by catching 14 passes in a 24-7 triumph over Vanderbilt.