PINSON – During the city of Pinson’s regular council meeting on Thursday, Nov. 7, Mayor Hoyt Sanders announced to the city council that Taco Bell has purchased the vacant Hardee’s property on Highway 75.

“It will be no longer the existing building; it will be completely razed,” Sanders said. “They will start fresh with their new model, which will be similar to Clay and some of the other ones … An empty building never does anyone any good, so we’re very excited about that.”

Sanders said that the new Taco Bell will benefit the city, because it will be within Pinson city limits.

“The Texaco Taco Bell and the Sweeney Shell have not annexed in our history,” he said. “Most of you remember, earlier this year, the local action committee was instrumental in getting us McDonald’s, so we were able to bring that in. So Taco Bell is actually joining with the city upon their move. They hope to have that done sometime around the first of the year.”

Sanders said that the new Taco Bell location is expected to open early 2020.

“Congratulations Dawn for reaching Emeritus,” Sanders said. “I’m hot on your collar, I hope, trying and hoping to have mine very soon. That’s a great resource through the League of Municipalities, and Emeritus has only been out five years. When we started it was Basic, and then they added Advanced, and then Emeritus came along the way.”

According to www.alalm.org, “CMO Emeritus is awarded to officials who have acquired a minimum of 120 credit hours for Continuing CMO Education plus 15 points. Points can be earned by participating on ALM policy committees and attending specific ALM and NLC events.” 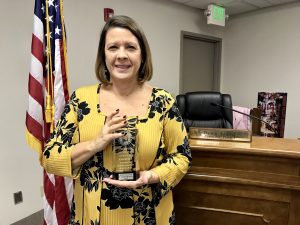 “Let me just say, because Councilor (John) Churchwell did it also, I think there’s approximately 4,500 mayors and councils in the state of Alabama and there’s only like 200 so far that have reached this status, so it’s pretty awesome,” Tanner said.

Councilor Robbie Roberts made a motion requesting that the city authorize expenses for himself and any other council members who wish to attend a Grant Writing USA seminar with the League of Municipalities in Madison County in December. Roberts said that expenses for the trip, including room and board, should cost less than $1,000/person. The motion was passed unanimously.
In city business, following a public hearing at which no one spoke, the council unanimously approved Ordinance No. 2019-18, authorizing the post annexation rezoning of properties at 6807 Briarwood Drive and 5171 Briarwood Circle, from Jefferson County District A1 to City of Pinson District RM (residential medium density).

The council then passed Ordinance No. 2019-19, which grants an electric franchise to Alabama Power Company. This ordinance addresses the expiration of a 15-year-old contract with Alabama Power from when the city of Pinson was first established.

“This is the first one to come up,” City Attorney Shane Black said. “Right out of the gate, the city gave a franchise to Alabama Power Company. Just a quick refresher on franchises, under the Alabama Constitution, the city is the manager of all the public rights of way within the corporate limits, except of course for state highways, state roads that are within the city. So before any business can use those rights of way, they must have a franchise from the city. So what that means, if you are a utility that is not a municipal-owned utility, it means that you’ve got to get the consent of the city in order to utilize those rights of way. And, of course, as we all know, Alabama Power Company provides electrical power for the city of Pinson and its residents, and it uses the rights of way for its power poles, all up and down the rights of way. But it has to have (the city’s) consent in order to do so.”

First, Tanner addressed a former motion that passed at the Oct. 17, 2019, council meeting, which appropriated $10,500 to the PVHS baseball team to fully fund a backstop net and assist with the purchase of uniforms. Due to having 30 players instead of 25, the team requested to wait on the net and put all of the funds toward uniforms.

“For the baseball, I would like to amend that the whole $10,500 go to uniforms, as requested, and to additional players to the team,” Tanner said. The motion passed and the backstop net will be delayed until next year.

Next, Tanner made a motion to give $4,000 to PVHS Wrestling for uniforms, and $4,000 to PVHS Track and Field for a new pole vault and a runway jump for the long jump. This motion was also approved by the council.

The next meeting of the Pinson City Council will be Thursday, Nov. 21, 2019, at Pinson City Hall. Pre-council begins at 6:30 p.m. and the regular council meeting begins at 7 p.m.