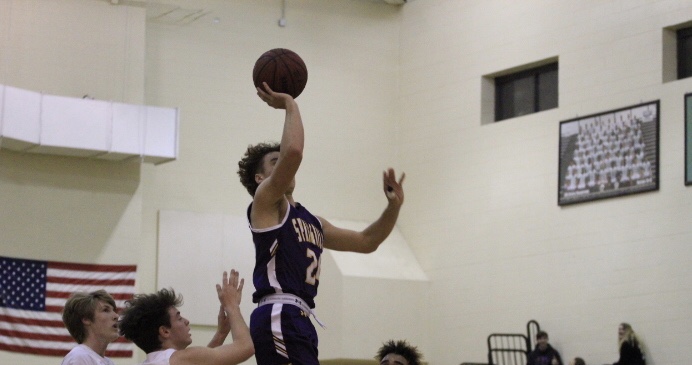 SPRINGVILLE — In a game that was clearly divided by the halftime break, the Springville Tigers held on late to defeat the St. Clair County Saints, 52-44, on Tuesday night.

The game began as if it was going to be a one-sided battle. The Tigers came out shooting, and the Saints could not buy a bucket. Springville led 11-0 after the first eight minutes of play. That lead would grow to 21-0 before James Key would tap a rebound in for the first points of the night for St. Clair County.

The Saints would outscore Springville, 7-6, in the final 4:21 of the first half, but the Tigers went into the half leading, 27-7.

“I think we matched up very well in the first half, we was able to guard them, not give them good looks and we rebounded well,” Springville head coach Jeff Smith said. “In the second half, it was just the opposite. They shot it well, we weren’t there, we weren’t around them.”

In the second half, it seemed like the teams swapped jerseys. St. Clair County left the locker room and began scoring almost immediately. Springville, on the other hand, was getting a small taste of what the Saints suffered in the first half. When the third quarter had ended, St. Clair County had out scored the Tigers, 24-11, thanks in part to the sharpshooting of Gatlin Daniel, who had 10 of the 24 Saints points.

The final quarter was like a heavyweight boxing match, physical with both teams trading shots. St. Clair County cut the deficit to four points, but could not get any closer. In the end, Springville would hit its free throws and win the first matchup of the season again the rival Saints, 52-44.

Springville improves to 6-2 on the season and 2-0 in region play. St. Clair County drops to 5-6 and 0-3 in the region. Springville will travel to Center Point on Friday for a regional matchup again the Eagles.