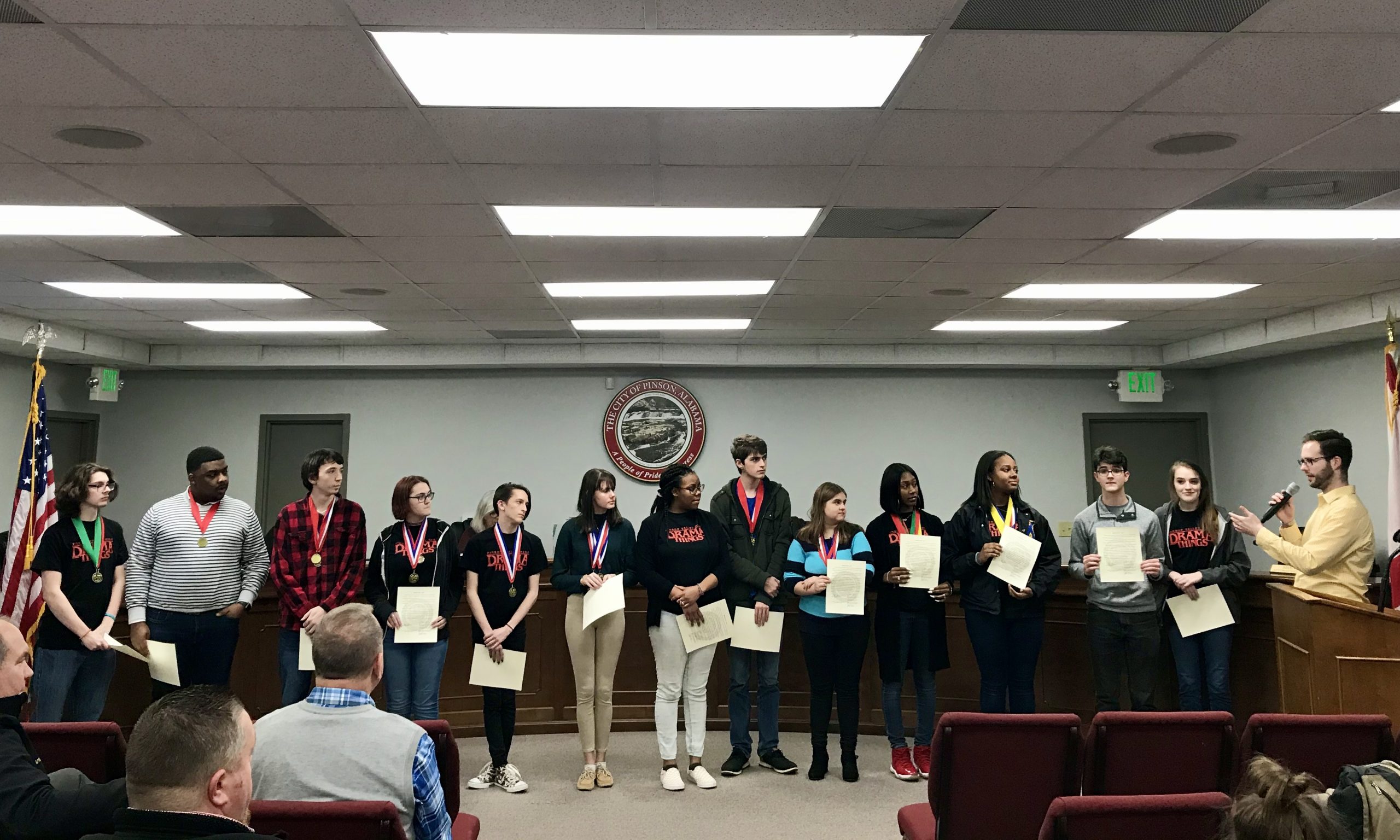 PINSON – During the Pinson City Council meeting on Thursday, Feb. 20, Mayor Hoyt Sanders and the council recognized the Pinson Valley High School Theatre Program for its accomplishments in the State of Alabama Walter Trumbauer Festival at Troy University in December 2019. The thespians were each presented with a copy of Resolution 20-07, which was unanimously approved and signed by the mayor and council. 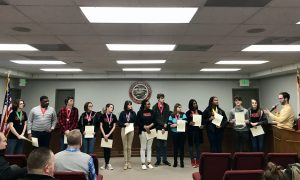 “(This was the) first time that Pinson Valley Theatre Department has chosen to have a class for competition on Trumbauer,” PVHS Theatre Director John Bailey said. “About 25, 26 (students) in the class, each one competing individually or with a duet, monologues and duets, and each one receiving superior ratings … at the district level going on to state. And then, many receiving superior ratings at state.”

Under “Old Business,” the council unanimously approved two ordinances concerning the future mayor and council salaries, which will go into affect after the 2020 election season.

Both ordinances state, “The City Council finds that the responsibilities and obligations of the City’s elected municipal officials/mayor are such that the officials should be compensated for their time and efforts on behalf of the City.”

Ordinances 2020-5 and 2020-6 do not provide salaries for the current mayor and council, but “shall only be effective as to (city council members/mayors) duly elected in the August 2020 general election and thereafter.”

Council members may also receive an annual salary supplement of $600 for “completion and retention of the Alabama League of Municipalities Certified Municipal Officer’s Basic program,” and $100 per year for each additional level of Advanced or Emeritus achieved and retained. This supplement caps at $800 per year.

The ordinance states, “The maximum compensation for a member of council (other than the mayor and the Chairperson Pro Tempore) shall be $9,500.00 per year.”

“Pretty much, this is keeping it in line with what it was before … just with inflation adjustment scenario,” Councilor Robbie Roberts said. “It’s a little strange, people say, ‘Oh, you’re raising your pay.’ Well that’s not true, because it’s not us. It’s for whoever serves in the next term.”

Roberts offered Ordinance 2020-6, concerning the salary for mayor, which states that the base pay compensation for the mayor-elect will be $29,000 per year, payable in monthly installments. The current base salary for the mayor is $24,000.

Additionally, the mayor will receive an annual salary supplement of $240 for each year, up to five years, that the mayor has previously served as an elected official of Pinson, for a maximum of $1,200 per year.

“This one has more changes than what the other one was, but it’s in keeping basically, again, with the same thing we just outlined in the city council’s ordinance that just passed,” Roberts said. “The difference here is that … basically, I think it’s important that the size of the city that we’ve grown to, and the things that are going on around here, we’re still looking to compensating for a full-time mayor. We can’t expect somebody to work full-time here if we don’t have the pay accordingly.”

Mayor Hoyt Sanders said that the new salary ordinances are comparable to those of other local municipalities, and clarified that this ordinance does not necessarily mean the city expects to have a full-time mayor position. Roberts said Ordinance 2020-6 is set up in a way that would allow the city to progress toward having a full-time mayor in the future.

In other city business, the council approved:

Motion to allocate $15,000 to Kermit Johnson Elementary and $7,000 to Rudd Middle School. The city held off on an allocation to PVHS while awaiting quotes for paving at the softball field.

Motion to allocate $20,000 each to Center Point Fire District and Palmer Fire District, and $500 for Glenwood Fire Department.

Ordinance 2020-4, annexing a 40-acre tract of land near Miles Spring and Woodhaven into the corporate city limits.

Resolution 20-8, authorizing the mayor to enter into a contract for advertising and promotion with the Clay-Pinson Chamber of Commerce for the 2020 Alabama Butterbean Festival.

Resolution 20-9, directing the mayor to enter into a contract with the C-PCC, whereby the city will pay $10,000 “in exchange for activities promoting the economic and industrial development of the municipality.”

Resolution 20-10, authorizing the mayor to renew the city’s contract for the cooperative management of Turkey Creek Nature Preserve.

The next meeting of the Pinson City Council will be Thursday, March 5, 2020, at Pinson City Hall. Pre-council begins at 6:30 p.m. and the regular council meeting begins at 7 p.m.