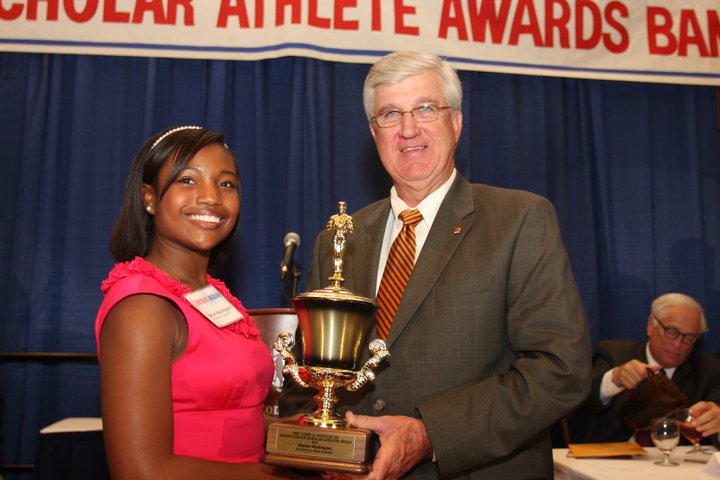 Bryant-Jordan Scholarship winners will be announced via TV, online broadcast

MONTGOMERY – The 35th annual Bryant-Jordan Scholarship Awards Banquet was canceled in compliance with the Center of Disease Control’s recommendation that all events with 50 people or more be discontinued.

However, the AHSAA announced that the Bryant-Jordan Foundation will air a television and online event announcing the region, class and overall 2020 Bryant-Jordan scholarship recipients as well as a number of other special scholarships provided by various organizations.

“While we are very disappointed that our annual banquet must be canceled, we are very thankful that technology will allow us to still showcase these incredible student-athletes and announce the overall scholarship recipients via television and online viewing,” Edgar Welden, Chairman and President of the Bryant-Jordan Foundation, said.

The event will be broadcast through the AHSAA TV Network and the NFHS Network. The show can be seen from the following links:

Each regional winner is presented a $3,000 scholarship to the college of their choice from the Bryant-Jordan Foundation. During the broadcast, the seven Scholar-Athlete Class winners and seven Achievement Award Class winners will be announced. Each will receive an additional $3,500 scholarship. The Larry D. Striplin, Jr. Scholar-Athlete of the Year recipient and the Ken and Betty Joe Blankenship Achievement Award Student-Athlete of the Year recipient will also be announced. Each will each receive an additional $4,000 scholarship.

The Bryant-Jordan Awards Banquet has been held annually since 1986 with more than $10.8 million in scholarship funding distributed to 3,222 student recipients since its inception.

“We know this has been an emotional time for everyone,” Welden said. “We sincerely hope that everyone will tune in to this online/TV broadcast as we celebrate the achievements of some of the smartest and most courageous student-athletes in our state and nation.”