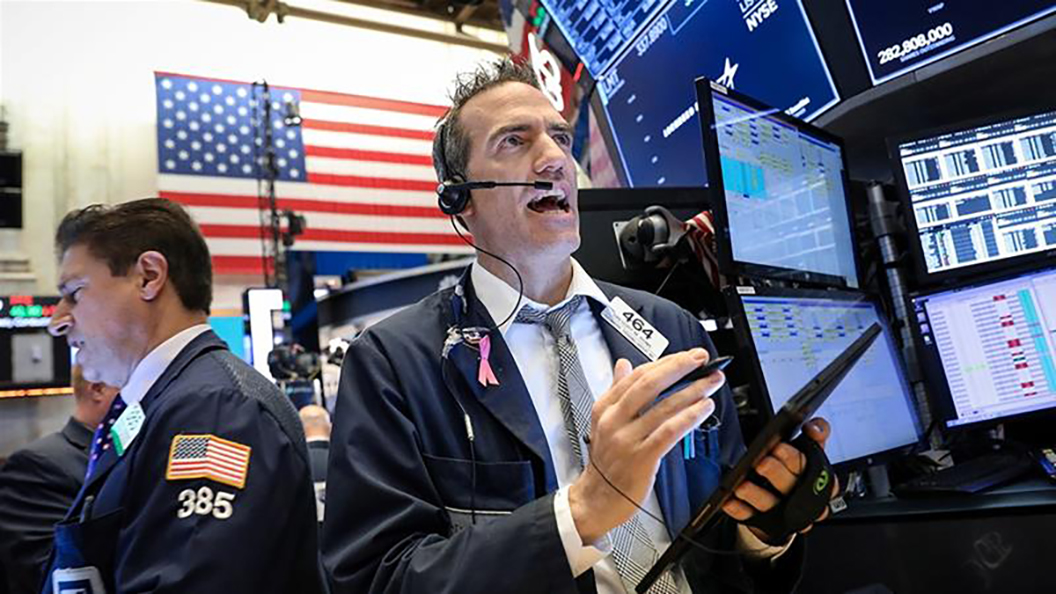 NEW YORK — Stocks surged on Wall Street Tuesday, sending the Dow up more than 2,100 points, biggest-ever point gain, as Congress nears a deal to inject $2 trillion into the economy to mitigate damage from the coronavirus outbreak. The Dow’s gain of 11.4% was its largest percentage increase since 1933. Treasury yields rose in an encouraging sign that demand for low-risk assets was easing. The market has seen other big rebounds recently, only for them to wash out immediately. Investors say they need to see the number of new infections peak before markets can find a bottom.

THIS IS A BREAKING NEWS UPDATE. AP’s earlier story is below:

The Dow Jones Industrial Average surged 10% Tuesday as Congress and the White House neared a deal to inject nearly $2 trillion of aid into the coronavirus-ravaged economy.

The huge gains on Wall Street followed a worldwide rally as a wave of buying interrupted what has been a brutal month of nearly nonstop selling. Despite the gains, investors were far from saying markets have hit bottom. Rallies nearly as big as this have punctuated the last few weeks, and none lasted more than a day.

Investors have been frustrated waiting for the U.S. government to do what it can to help the economy, which is increasingly shutting down by the day. But both Democrats and Republicans said Tuesday they’re close on a massive economic rescue package, which will include payments to U.S. households and aid for small businesses and the travel industry, among other things.

A vote in the Senate could come later Tuesday or Wednesday, and if approved, it would follow the latest round of extraordinary aid launched by the Federal Reserve on Monday.

“I don’t think there’s any more confidence in the fundamental outlook, but the fact that we’re making progress is good news,” said Katie Nixon, chief investment officer at Northern Trust Wealth Management. “It’s sort of like, keep the patient alive in the emergency room so you can provide some treatment options.”

The market has seen rebounds like this before, only for them to wash out immediately. Since stocks began selling off on Feb. 20, the S&P 500 has had six days where it’s risen, and all but one of them were big gains of more than 4%. After them, stocks fell an average of 5% the next day.

“One of the things to be careful about is thinking this will be the panacea or that this fiscal response will be sufficient,” said Eric Freedman, chief investment officer at U.S. Bank Wealth Management.

Ultimately, investors say they need to see the number of new infections peak before markets can find a floor. The increasing spread is forcing companies to park airplanes, shut hotels and close restaurants to dine-in customers. Altogether, estimates suggest at least 10% of the U.S. economy is shutting down, according to Rob Sharpe, head of investments and group chief investment officer at T. Rowe Price.

Economists are topping each other’s dire forecasts for how much the economy will shrink this spring due to the closures of businesses, and a growing number say a recession seems inevitable.

To support the economy while health experts work to corral the virus, the Federal Reserve on Monday pledged to buy as many Treasurys and mortgage-backed securities as it takes to keep lending markets working smoothly..

Investors are waiting for Congress and the White House to also do what they can. They debated through the weekend and Monday on a plan to send cash to households and help support the hard-hit travel industry, among other things. After negotiations dragged through the night, a Senate vote could come later Tuesday or on Wednesday.

That helped travel-related stocks surge to the market’s biggest gains. Norwegian Cruise Lines, MGM Resorts and American Airlines Group were all up at least 30%. All, though, remain 60% or more below where they were last month.

Other areas of the market that were hardest hit in recent weeks were also helping to lead the market higher, including energy companies and banks.

Governments and central banks in other countries around the world are unveiling unprecedented levels of support for their economies in an attempt to limit the scale of the upcoming virus-related slump. Germany, a bastion of budgetary discipline, also approved a big fiscal boost.

The gains came even as the first reports arrived showing how badly the outbreak is hitting the global economy. In the United States, a preliminary reading on business activity in March showed the steepest contraction on record, going back to 2009. Reports were also gloomy for Europe.

“Everyone was prepared for a set of shockers, and that is precisely what we got, but they are not a surprise,” said Chris Beauchamp, chief market analyst at IG. “It is at times like this that the market’s propensity to look forward is demonstrated most effectively.”

More dour data is nearly assuredly on the way. On Thursday, economists expect a report to show the number of Americans applying for jobless claims easily set a record last week. Some say the number could be way beyond 1 million, amid a wave of layoffs, toping the prior record of 695,000 set in 1982.

Helping to lift sentiment in markets is news from China that it is preparing to lift the lockdown in Wuhan, the epicenter of the outbreak, and from Italy reporting a reduction in the number of new cases and coronavirus-related deaths.

“It’s still early days, of course — perhaps investors can start to envisage life beyond the coronavirus,” said Craig Erlam, senior market analyst at OANDA Europe. “That could make stocks look a little more attractive, although anyone jumping back in now will need to have nerves of steel.”

For most people, the coronavirus causes only mild or moderate symptoms, such as fever and cough. Those with mild illness recover in about two weeks. Severe illness including pneumonia can occur, especially in the elderly and people with existing health problems. Recovery could take six weeks in such cases.