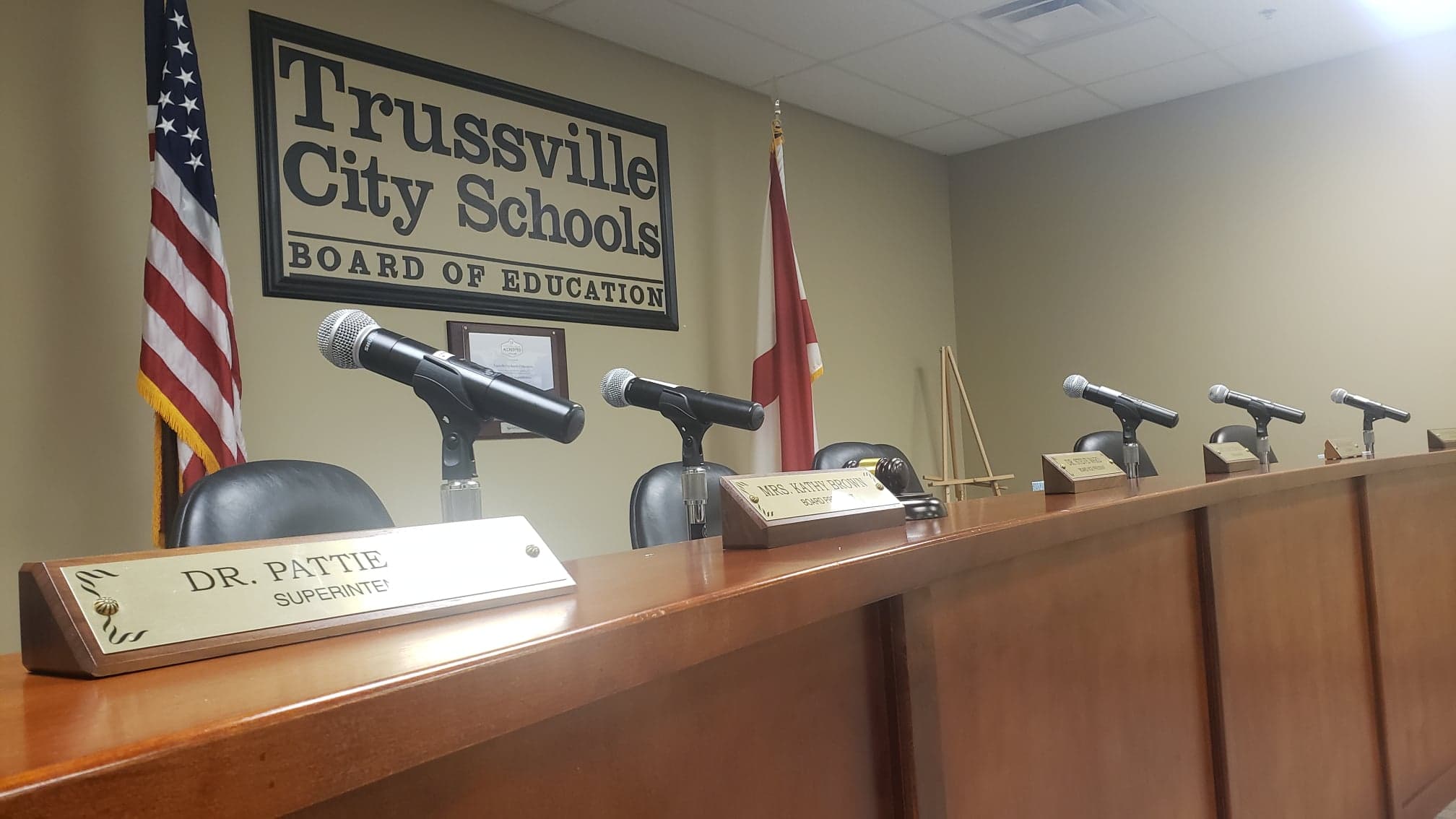 “I think the main thing to focus on is reducing the class sizes or the number of students in a classroom, at a time, to approximately 50%,” Wilson said. “As I understand it, that’s what Trussville City Schools has done, but it’s just doing it in a more creative way than some of the other school systems are doing.”

Neill said the school system reduced the number of desks in each room to ensure around a 50% capacity in each room. Wilson explained that is one of the reasons the TCS plan works.

“On the surface of it, it may look like they aren’t following the letter of the recommendations exactly, but I think they actually are achieving it, just in a more creative way,” Wilson added.

Neill released a video explaining how operations inside Trussville schools will work.

“We have worked with the Alabama Department of Public Health, the Jefferson County Health Department, the State Department of Education and we’ve considered all of the guidance from the CDC in Atlanta to develop a very safe reopening for Trussville City Schools,” Neill said in the video.

[SEE BELOW: IMPLEMENTING RECOMMENDATIONS for more on desk placement]

Dr. Neill said more students have switched to online-only learning and that has also reduced class sizes across the board. She said exact numbers will not be available until the end of the week because some students are still switching.

Dr. Wilson said while the availability of online learning is a great option, there are also benefits to in-school interactions.

“There’s more concerns here than just health concerns,” Wilson said. “There’s the social health and mental well-being of the kids and the ability to learn. So, all of those things have to be weighed.”

Wilson also said it is important for some younger children who are learning to read to be in the classroom.

“They may have difficulty with their phonics,” explained Wilson. “They need to be able to see the teacher’s lips or special situations where somebody is having difficulty hearing through a face-covering. In situations like that, we are going to have to be flexible.”

Neill said she spoke with Dr. Wilson on several occasions before she presented a plan to the Board of Education.

“All of this was explained to Mark [Wilson], who is a medical guy and he said, ‘Okay,’ Neill said. “So, I gave it to the board after I talked to him. I mean, I would’ve been out of my mind to go out on this limb by myself.”

Before Neill made a decision on the plan for TCS, Wilson recommended in-person instruction for Pre-K through Grade 5 or 6 and he asked schools to consider virtual-only or hybrid/alternate-days of virtual and in-person learning for middle and high schools. Wilson said there would not be a one-size-fits-all plan for schools and that he trusted school leaders to make the right decisions.

“Based on what I’ve been told, and my sense is that Dr. Neill has been very, very thoughtful about this,” said Wilson. “I think we are trying to achieve the same, ultimate goal.”

“We took out the desks,” explained Neill. “There’s no way it can be overcrowded. There are only how many desks we can fit at 6 feet apart, in the high school.”

Neill said system-wide, the number of desks ranges between 16 and 24, but she said students will be staggered throughout the day.

Also, in Wilson’s recommendations, he said a hybrid schedule would be a reasonable alternative to traditional school. Several school systems signed on for that model.

TCS Superintendent Dr. Neill said that she has taken steps to protect students seriously very and that she has carefully considered all options.

“Starting school is like guess-work but when the students get there it’s more real,” said Neill. “So, the best thing we can do is get the kids in the door.”

Neill said issues will be addresses as they arise.

There will be designated learning labs at all schools and they will be used for overflow.

“This is a safety measure,” Neill explained. “All of our desks are at least 6 feet apart in grades 6 – 12 and if there is an overflow, there’s a learning lab per class, depending on how many students might be in the class for one or two days a week.”

Four to six students are expected to use the labs one or two days a week in order to stagger students within the school building.

“The rotation of students keeps the classroom full at approximately 50% capacity,” Neill said. “We’re just rotating through the lab.”

THE BUILDING AND BEYOND

Hallways and stairwells will be one-way traffic only and teachers will monitor distancing during staggered class-changes. In the cafeteria, students will only be allowed to sit in every other seat. There will also be overflow areas for eating.

The Jefferson County Health Department has not worked out how it will handle inspections during the pandemic. Wilson said options are being considered but he hopes to collaborate with school leaders.

“The last thing they want is to have an outbreak in their schools,” Wilson said. “So, we are all wanting the same thing, we are all trying to figure out how to best do this. So, we’re not really so concerned about them trying to cut corners, break rules or pull the wool over our eyes because I think they want to get it right.”

Wilson said all schools are forced to choose from bad options because there is no perfect plan. He said schools are having to balance needs and make the best of a difficult situation.

“I have always advocated for the education of our children as being of paramount importance,” Wilson said. “Part of that is for public health. Our children have to be educated in order to be healthy.”

For parents, Wilson said it is important to be vigilant in watching for signs of illness.

“I know that my recommendations caused quite a stir for so many parents,” Wilson said. “I came in and disrupted what they thought would be their plan.”

While he is sympathetic to parents, he said his main goal is to protect students and teachers while allowing them to be successful.

“It sounds like I’m putting a lot of constraints on people and I’m being hard-headed about it, but we want them to succeed,” Wilson added. “In order for them to succeed in school, we need everybody’s help outside of the school.”

Neill reminded parents of bus riders to ensure their children wear face-coverings on the bus. She is asking all parents to perform temperature checks daily and to keep children home if they are not feeling well.

In the case of a positive COVID-19 test within the school system, TCS will send an exposure letter to students who may have been exposed. The letter will ask parents to quarantine their child for 14 days. Dr. Wilson said schools could close temporarily if there is a large number of quarantined students at once.

Trussville City Schools will re-examine options after Gov. Kay Ivey speaks at the end of the month.