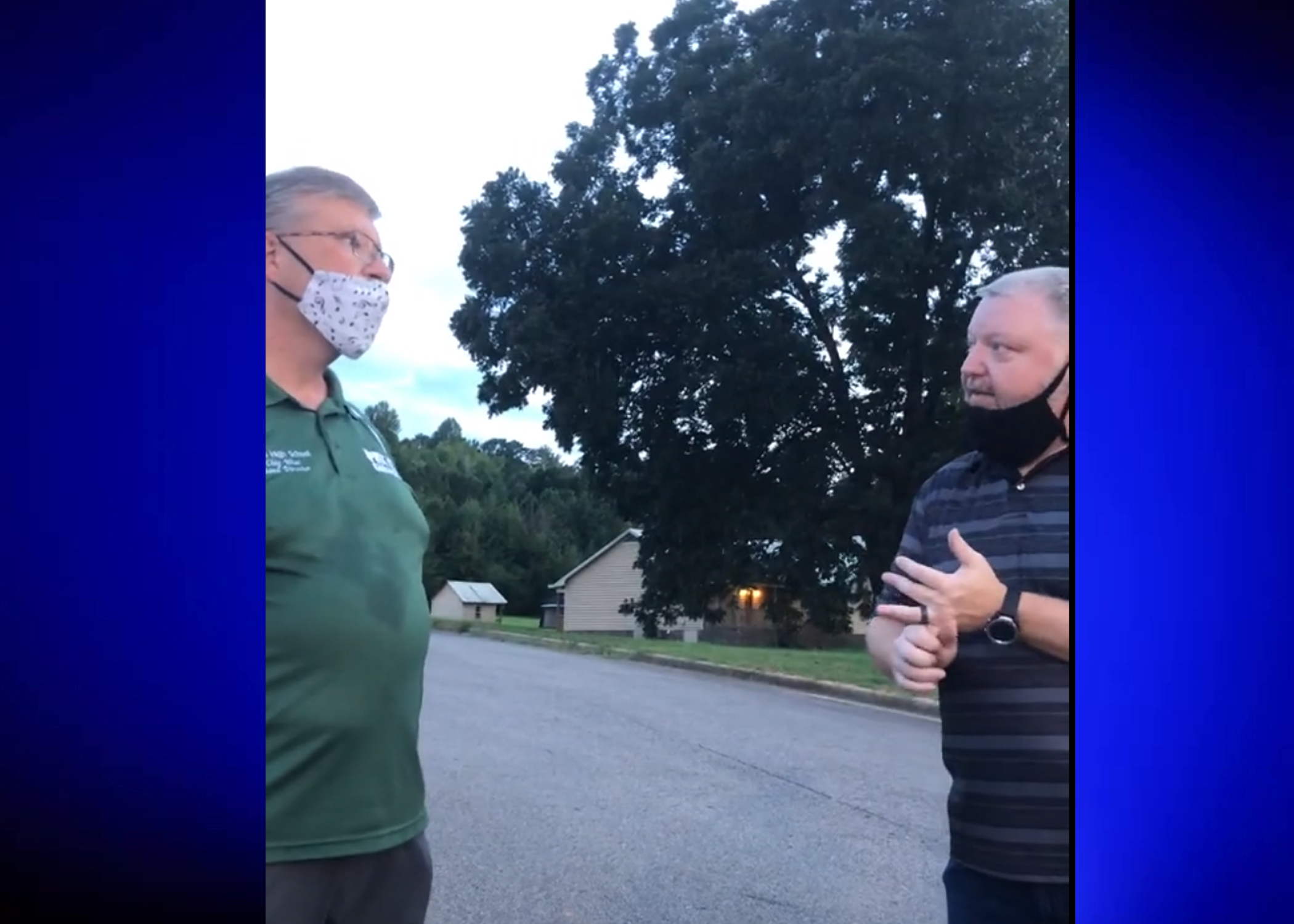 The game was played at Moody and the Leeds High School band was asked to leave because of a policy put into place by St. Clair County Schools. The policy states that visiting bands are not allowed to play at any games in St. Clair County, in response to the coronavirus pandemic, according to St. Clair County Superintendent Mike Howard.

“In July, our band directors met with our principals and our athletic director and it was decided then that we were not going to travel outside of our school system nor would we travel to any school inside our school system,” Howard explained. “Also with that, because we are the host school and we felt best to have a rule imposed that we would not let bands in from outside the county because we have the obligation to keep people safe.”

“We did not know that St. Clair County had decided that visiting bands could not attend,” Moore claimed. “If you think about it, it would make zero sense for us to load the bus with our students and our equipment to travel to a place where we were not welcome.”

Howard said there were five occasions that someone with the Leeds school system was informed about the policy, including a phone conversation between himself and Moore.

“On Aug. 19, I spoke with the Leeds Superintendent and told him that we were not allowing outside bands to travel to our school system,” Howard said. “So, he and I had a personal conversation on Aug. 19, at 8:41 a.m. in the morning. I have the phone log.”

Howard said when tickets were dropped off at Leeds High School, Moody’s principal informed the Leeds’ principal that the band would not be allowed at the game. Moody Principal Christopher Walters confirmed he spoke to the Leeds principal about the policy. Howard also said on the Tuesday before the game, the Moody Band Director reached out to the Leeds Band Director as a reminder.

So, Friday night when the Leeds High School band showed up to the game, Walters said he approached the band director.

“They were in the parking lot, warming up and I told him that unfortunately, they did not have the tickets and that they would not be allowed in the stadium,” Walters explained. “They went to a grassy area at the middle school and that’s when I said they could stay there until the superintendents had a conversation. At no point before that had I said, ‘yes they can stand anywhere on our campus.”

During the Leeds City Council meeting this week, Leeds Municipal Court Magistrate Laura Roberts addressed the situation. Roberts said she was there during the incident and that it turned “ugly.” Walters said there was nothing “ugly” about any conversation he had during the incident.

“I believe that Ms. Roberts made the statement that it was quote “ugly” after that,” Walters said. “However, after that, Mr. Howard went over and we talked to the band director and talked to Mr. Williams and we just told them that unfortunately, that was going to be the case.”

Leeds Superintendent Dr. John Moore said the confusion came into play because the band was aware they wouldn’t be able to perform their half time show, but thought they would be able to be at the game.

“I called Mr. Howard, he’s a neighboring superintendent, of course, and I have spoken to him in the last year about different matters, no bad blood whatsoever,” Moore said. “I asked him to accommodate my band since we were there and that there was a miscommunication and we were 10 minutes from kick-off and he was adamant that we had to leave.”

Howard said he was unable to accommodate the band due to COVID-19 restrictions and that he was given no choice but to enforce the policy.

“If I don’t allow my own people to travel to each other, I can’t allow somebody from outside of St. Clair County traveling inside either,” Howard explained. “I said, ‘We’re not prepared for an outside band.”

Superintendent Howard said tickets were pre-sold to the game in order to keep the stadium at half-capacity. But Leeds High School Principal Rayford Williams said that’s why the band agreed to play outside of the stadium. Then, when his school’s band arrived in the grassy area beside the middle school, and they were once again asked to leave. Williams said at that time, the band packed up and left the game.

“I asked my band director to stay there until I got there because I was on my way and so, when I got there, we determined that we needed to go,” said Williams. “We were asked to leave and so, we left.”

However, Howard said Moore initially refused to ask his band to leave.

“He [Moore] told me in front of witnesses that if I want them to leave then I need to arrest their band director for trespassing,” Howard said. “And I said, ‘Dr. Moore, I do not want to arrest your band director, I just respectfully ask that you tell him to leave because y’all don’t have permission to be here for our rule.”

Howard said he also went to speak with the band director. He provided a video of the conversation. The video can be viewed below.

“I respectfully requested for him to leave because we have had a policy in place for two months,” Howard said. “I can’t speak on their side but I am just saying that I was enforcing the rule that we created because of the pandemic of not allowing any band to travel to our schools, including our own bands. This has nothing to do with a rivalry it has to do with following rules.”

Moore said he questioned Howard’s decision and did not agree with it, but he said he complied with Howard’s demands.

“The conversation went to the floor and he told me, ‘This is my county and I make the rules and if you don’t get your people to leave, I will call the Sheriff and have them removed,” Moore said. “And I said, ‘Mike do you hear yourself? You want to have school children removed over an adult problem? A miscommunication?’ And he said, ‘I’m about to call them.”

Moore said he wishes since there was a miscommunication that the issue would have been handled differently.

“It wasn’t communicated, and we are not mind-readers,” Moore said. “The point being, since we showed up, we thought we were due a neighborly, hospitable accommodation that clearly we would’ve extended to them had the shoe been on the other foot. He [Howard] acted in a way that I’ve never seen a superintendent act in all of my years of service.”

The St. Clair County Superintendent believes his administration is being falsely represented in the matter.

“Unfortunately, we are being painted to look like villains,” Howard added. “It makes us look like we are unprofessional and just the worst people ever when we are just doing our jobs and enforcing the rules that we agreed upon before the season started and the rules that every school knew about.”

Both superintendents said they are ready to put the incident behind them so they can focus on what’s best for the kids.

“It’s unfortunate that it happened at all and we’re ready on our end just to move forward,” Howard said.

“I’ve learned a long time ago that we have to always move forward and everything doesn’t always go our way,” Moore said. “But it was such an outrage that I felt like I had to speak out. I don’t think the poor decision on his part is reflective of the school system, the school board or anyone who lives in Moody or St. Clair County.”

Howard said he has offered to pay for travel expenses for the Leeds High School Band and he has agreed to not allow the Moody High School band to travel to Leeds for the 2021 football season. He also said the school system will work out reimbursement for band parents who purchased tickets and we unable to use them at Friday’s game.

“I was caught in a no-win situation, Howard said. “Either I had to do what I had to do or I had to violate our own rule and I couldn’t win in that situation. But I’ve tried to do everything I can to help because I feel bad for the kids.”

Principal Walters said he looks forward to a day when both bands can be at every game.

“I would love to have both bands and all the fans there,” Walters said. “Friday night football is one of the greatest environments and it builds a positive culture. Unfortunately, we had to make sure we could safely house bands, players and fans and so we made the decision in St. Clair County to have no visiting bands and that we wouldn’t travel as well.”

Walters said he hopes to continue a positive relationship with the Leeds High School principal.

“It hurts my heart to not have that healthy rivalry,” said Walters. “Hopefully, we can get by this and start to develop that relationship and have that rivalry and turn it into something that can help the community.”

The video below was provided by St. Clair County Superintendent Mike Howard.