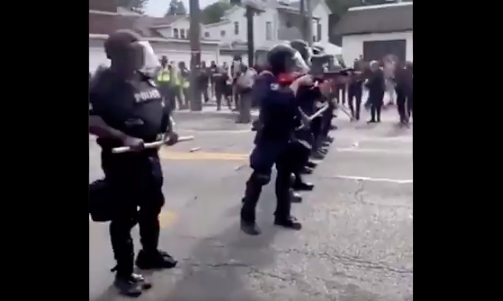 LOUISVILLE, Ky. — A Kentucky grand jury brought no charges against Louisville police for the killing of Breonna Taylor during a drug raid gone wrong, with prosecutors saying Wednesday that two officers who fired their weapons at the woman were justified in using force to protect themselves after they faced gunfire.

The only charges were three counts of wanton endangerment against fired officer Brett Hankison for shooting into a home next to Taylor’s that had people in it. The FBI is still investigating potential violations of federal law in connection with the raid at Taylor’s home on the night of March 13.

Ben Crump, a lawyer for Taylor’s family, denounced the decision as “outrageous and offensive,” and protesters shouting, “No justice, no peace!” marched through the streets.

Police in Louisville, Kentucky, said Wednesday night that an officer had been shot. Later, it was reported that a second police officer was also shot. Police have a suspect in custody.

Scuffles have broken out between police and protesters, and some were arrested. Officers in riot gear fired flash bangs and a few small fires burned in a square that’s been at the center of protests, but it had largely cleared out ahead of a nighttime curfew and demonstrators marched through other parts of downtown Louisville. Dozens of police cars blocked the city’s major thoroughfare.

Taylor, an emergency medical worker, was shot multiple times by officers who entered her home on a no-knock warrant during a narcotics investigation. State Attorney General Daniel Cameron, however, said the investigation showed the officers announced themselves before entering.

The announcement drew sadness, frustration and anger that the grand jury did not go further. The wanton endangerment charges each carry a sentence of up to five years.

Right after the decision, protesters began gathering in Louisville. Police responded to the area, and some scuffles broke out. Officers could be seen handcuffing some people. Police also ordered a group that broke off from the protests to disperse.

Gov. Andy Beshear, a Democrat, said he authorized a limited deployment of the National Guard. Guard members and armored military vehicles were in downtown Louisville, and streets were blocked off with barricades, fences and large trucks.

But Cameron, who is the state’s first black attorney general, said the officers acted in self-defense after Taylor’s boyfriend fired at them. He added that Hankison and the two other officers who entered Taylor’s apartment announced themselves before entering — and so did not execute the warrant as “no knock,” according to the investigation. The use of no-knock warrants has since been banned.

“According to Kentucky law, the use of force by (Officers Jonathan) Mattingly and (Myles) Cosgrove was justified to protect themselves,” he said. “This justification bars us from pursuing criminal charges in Miss Breonna Taylor’s death.”

Walker told police he heard knocking but didn’t know who was coming into the home and fired in self-defense.

Cameron, who is a Republican, is a protégé of Senate Majority Leader Mitch McConnell who has been tagged by some as his heir apparent. His was also one of 20 names on President Donald Trump’s list to fill a future Supreme Court vacancy.

At a news conference, Trump read a statement from Cameron saying “justice is not often easy.” He praised both Cameron’s handling of the case and the governor’s calling up of the National Guard.

Democratic presidential nominee Joe Biden told reporters that he didn’t have enough information on the decision to comment fully but warned protesters to keep demonstrations peaceful.

“Do not sully her memory or her mother’s by engaging in any violence,” he said.

Hankison was fired on June 23. A termination letter sent to him by interim Louisville Police Chief Robert Schroeder said the officer had violated procedures by showing “extreme indifference to the value of human life” when he “wantonly and blindly” fired his weapon.

Mattingly, Cosgrove and the detective who sought the warrant, Joshua Jaynes, were placed administrative reassignment.

Last week, the city settled a lawsuit against the three officers brought by Taylor’s mother, Tamika Palmer, agreeing to pay her $12 million and enact police reforms.