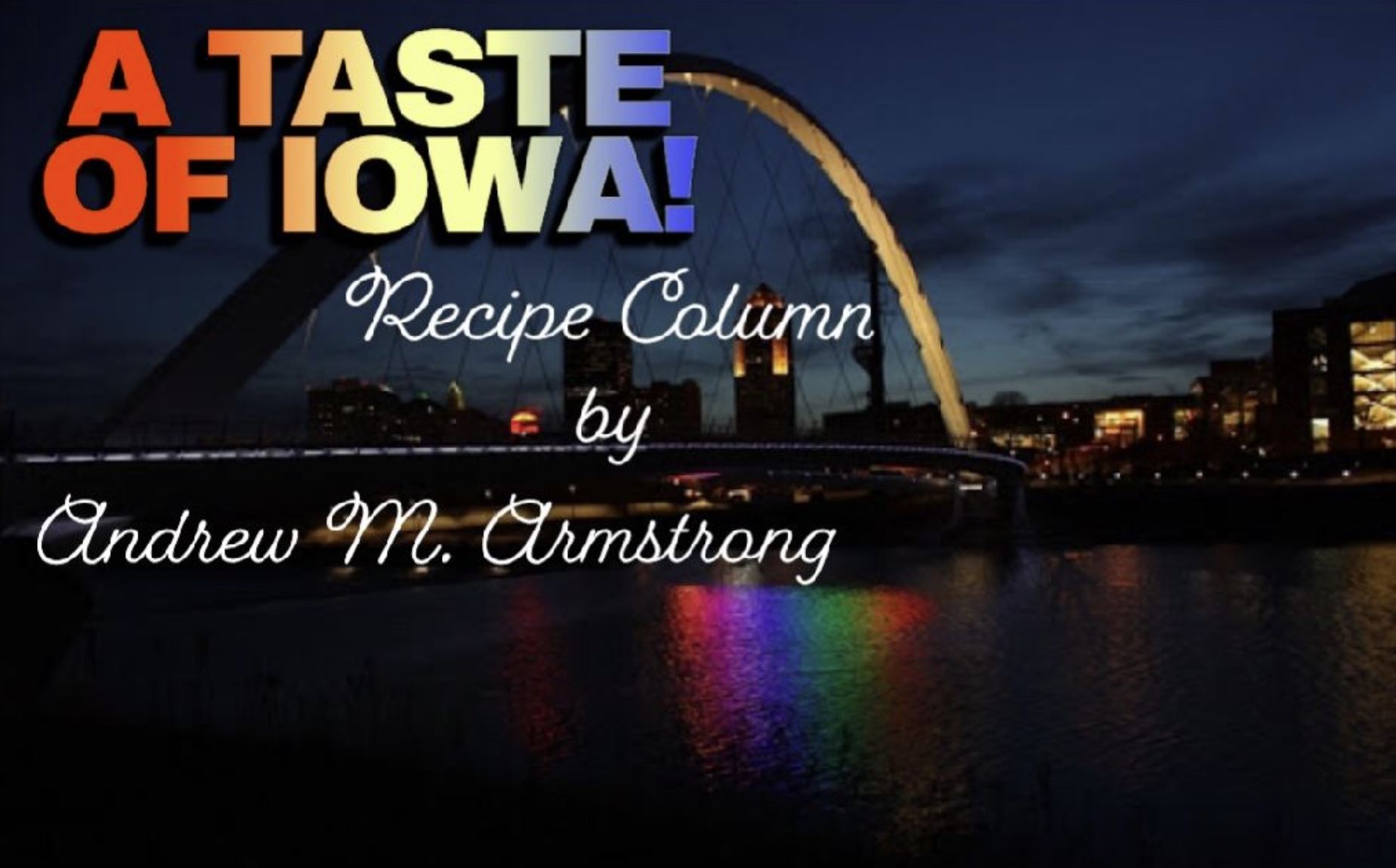 RECIPES: A Taste of Iowa

This week’s column is a taste of the Midwest. My good friends Andrew, Shawn and Mason inspired this particular edition. It is so intriguing to me how vastly different food flavors can be just 1,000 miles away.

The state of Iowa was founded on December 28, 1846, and it was named after the local Native American tribe known as the “Ioway”. The state capital is Des Moines and as far as interesting facts go, it was also the location that the singer Ozzy Osbourne was bitten by a bat on January 20, 1982. A 17-year-old fan threw the bat on stage and Ozzy assumed it was fake and he received a grizzly startle when it bit him.

It was also a hot spot in the prehistoric era of Wooly Mammoths and it is not uncommon for locals in today’s times to find bones and prehistoric artifacts. In the 18th Century, the Amana Colonies was founded by a group of German Pietists who left their homeland to escape religious persecution. They chose Iowa, because of the cheap farmland. Today they’ve mostly absorbed into the surrounding community, some of the residents still speak High German, or a dialect known as Amana German.

In the 1830s the state of Missouri almost went to war with Iowa after a mistake in land surveying. The two governors had threatened battle over the situation and the federal government stepped in resolving the issue before any shots could actually be fired. We can also think of Iowa for Otto Frederick Rohwedder, He was like any other American of the year 1912, but he was sick of trying to shove hand-sliced bread into the toaster. He invented a device to evenly “Pre-Slice” bread. The original device was tragically destroyed in a fire and the rebuilt design was forced into a delay. Which made commercially sliced bread unavailable, until the year 1928.

I wouldn’t say this is my best column by any means, however, you may easily find a new recipe for your family collection. A special recipe that you might all think is the best thing since sliced bread!

Combine all the remaining ingredients. Pour the mixture over the balls. Bake at 325 degrees for 1 hour, basting frequently with the sauce.

In a large bowl, mix the milk and pudding with an electric mixer for 2 minutes. Let it stand and rest for 2 minutes. Fold in the whipped topping. Fold in the apples, marshmallows and candy bars. Refrigerate the mixture for at least 4 hours, before serving.

Heat up your waffle iron. In a bowl cream together vanilla, sugar and butter. Beat in the eggs one at a time. In another bowl whip the heavy cream, until stiff peaks have formed. Fold in the remaining ingredients and the creamed butter mixture into the stiff heavy cream. Spray your hot waffle iron with cooking spray and cook the mixture to a golden brown.

Salt and pepper to taste

Preheat the oven at 350 degrees. In a large frying pan over medium heat melt the butter.  Add in the onion and bell peppers, then sauté. Stir in the flour and then add the milk.  Stir constantly, until the mixture has thickened and is smooth.  Remove from the heat and add in the corn, cheddar cheese, eggs, sugar, salt, and pepper. Pour into prepared casserole dish and top with bread crumbs. Set the casserole dish into a shallow pan of hot water and bake for 45 minutes.

Preheat the oven at 350 degrees. Cream together the shortening and the sugars. Stir in the coconut, eggs, vanilla, and nuts.  Fold in the flour, salt, soda, baking powder, and oatmeal. Drop by 1 teaspoonful onto cookie sheets. Bake for 15 minutes, until they are golden brown and cool on wire racks.