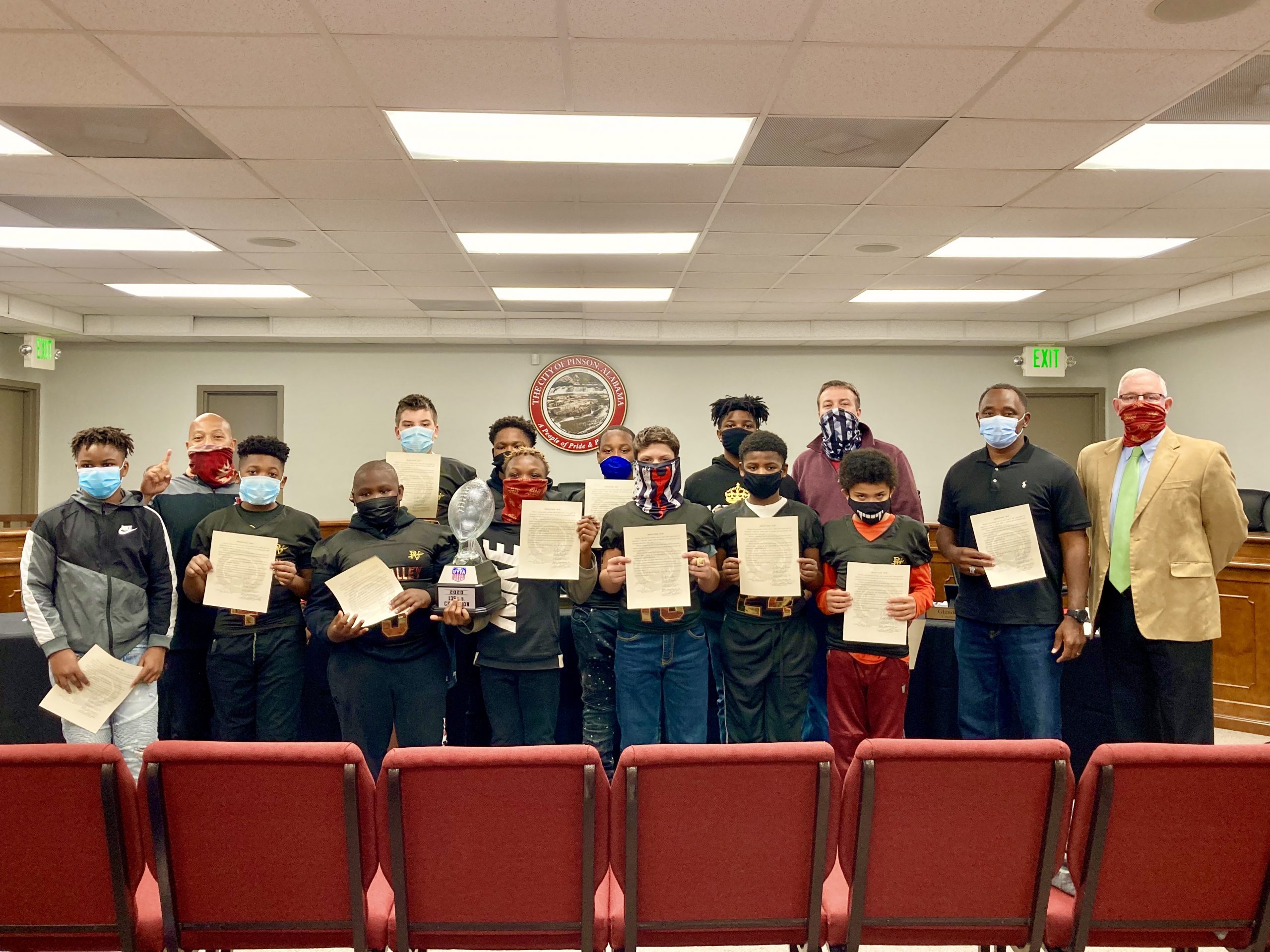 Resolution 20-59 states that “the 2020 Pinson Youth Sports League 12U Football team had an exceptional season, winning the state championship in the United Youth Football Association of Alabama League, and … this team represented Pinson Youth Sports, the City of Pinson, and all of Jefferson County with superior skills and in a sportsmanlike manner.”

“We appreciate what you guys did,” Mayor Joe Cochran said. “I’ve been involved in sports my entire life in one way or another … and to see you guys shine like that is great.”

The coaches and team members were each presented with a copy of the resolution.

“This season was an awesome season,” head coach Michal Thomas said. “Of course, with Covid kind of stepping in, we didn’t know exactly how it was going to play out for us. … These guys, they practiced hard, they played hard, they did exactly what they needed to do to be called a champion and I’m ecstatic about that; the coaches are.”

During the meeting, the council discussed a possible retail recruitment consulting agreement, to gather information needed to help recruit new businesses to the city of Pinson.

“I want people to have plenty of time to go through this and look at this document,” Councilor Dawn Tanner said. “It’s an agreement between the city and a retail recruitment consultant. There are a couple of phases in it. We are particularly looking at phase one, so to speak, and that’s the services of the market analysis piece. It’s something that we have never done in the city and it’s something that we really need to do to be able to promote the city.”

The marker analysis would include such information as traffic counts, number of households in the city and the median household income.

“It can be a wide-ranging document with a lot of detail and information, and my goal is to have that in hand and ready to go when we hit the ground running talking to people,” Cochran said. “We would like, at this time, to have somebody to help us put together the documentation that we need to present to retailers and whomever it is we are trying to recruit. It could be industrial; it’s not always retail.”

Cochran said that another purpose of this process is to identify the types of businesses that would be able to come into the Pinson community.

“The bottom line is we work on behalf of the citizens of Pinson and we hear them loud and clear,” he said. “I think this is one of the avenues you have to travel in order to accomplish the goal they are asking us to accomplish.”

Councilor Tanner thanked Cochran for making this a priority within the first two weeks of his elected term.

“I do want to thank the mayor for being in office two weeks and already presenting something like this,” she said. “This is something that we hear on Facebook and in the media: ‘We want this; we want that.’ Well, this will show that we’re trying to get that the best way we can.”

The council passed several other motions concerning city business, including a motion to purchase four sanitizing misters for city buildings, totaling less than $1,500; a motion authorizing the repair of a PVHS gym floor cleaner at the cost of $1,463; and a motion to give the Pinson Public Library staff 2% cost of living raises.

“Just before I came on as the mayor, in the last meeting or two before we took office, I know that cost of living raises were awarded to city employees,” Cochran said. “Perhaps there was a little bit of confusion at that time as to what is a city employee, and I think a broader definition of a city employee goes beyond the boundaries of this building or our public works building. I think it also encompasses our library. They operate under a little different set of circumstances and rules because they come under the Jefferson County Library Cooperative … but at the same time, I also believe, when it comes especially to cost of living, they are part of us, they are part of our family, we pay their paycheck and they should be all-inclusive just like all the members here at city hall and all the other departments.”

Councilor Glenda Kirkland announced that the Pinson Christmas parade will take place Dec. 4, 2020, at 6:30 p.m. The parade will start at Pinson First Baptist Church, traveling down Spring Street, Main Street and Pinson Boulevard, and ending at Bicentennial Park with the lighting of the Christmas tree. Pre-packaged cookies and hot cocoa will be provided, and Santa is expected to make an appearance.

“We did plan the Christmas parade on the fourth, which is the day the state championship will be played for 6A, with the hopes that we would have to postpone it a week,” Cochran said.

The next meeting of the Pinson City Council will be Thursday, Dec. 3, 2020, at Pinson City Hall. Pre-council begins at 6:30 p.m. and the regular council meeting begins at 7 p.m.