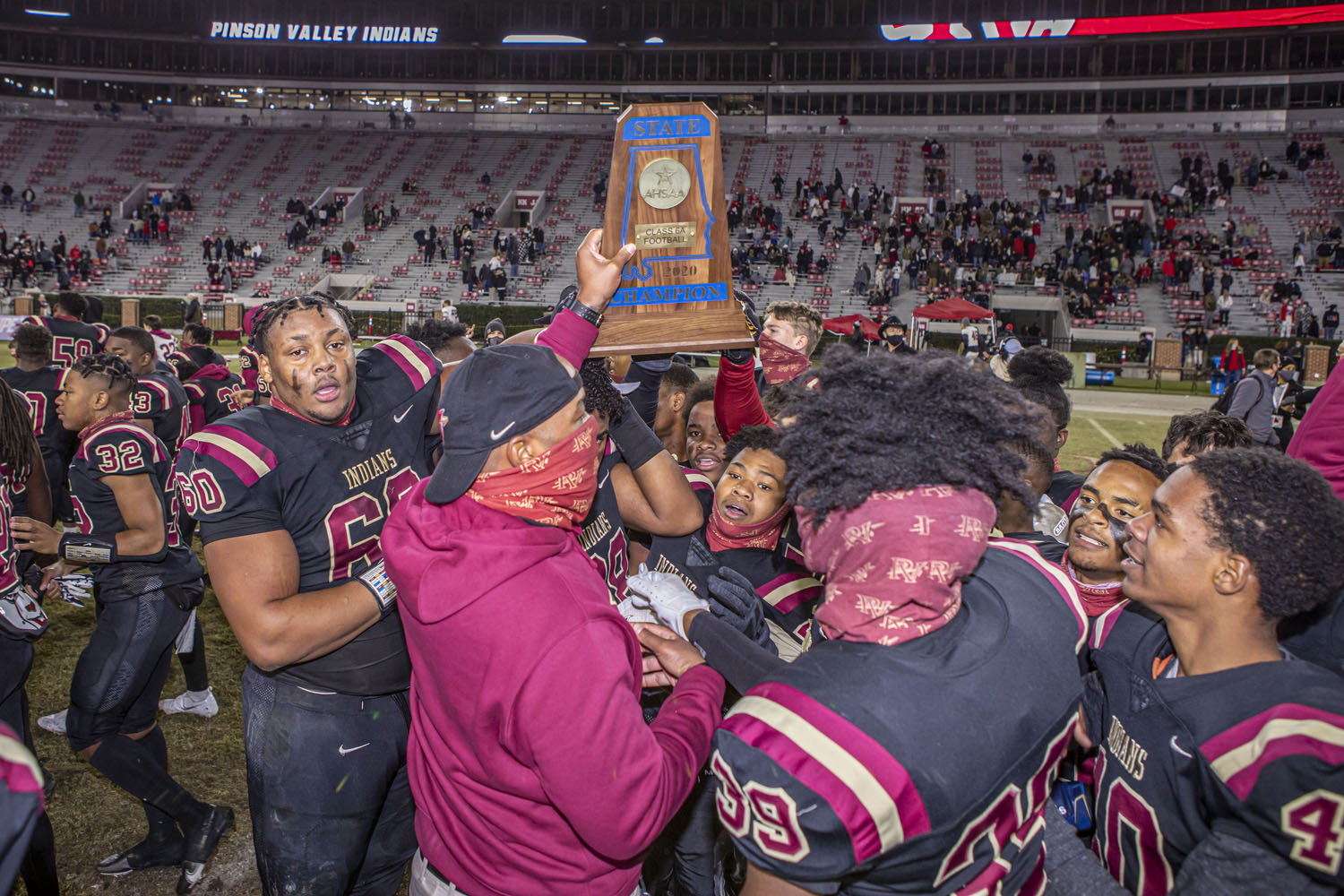 TUSCALOOSA — It was a come-from-behind effort in Bryant-Denny Stadium on Friday night, as the third-ranked Pinson Valley Indians knocked off the seventh-ranked Spanish Fort Toros 23-13 in the Class 6A state championship game.

Facing a 13-10 fourth-quarter deficit, the Tribe rallied for two late touchdowns, including the go-ahead touchdown strike from junior quarterback Zack Pyron to senior receiver Ga’Quincy McKinstry. The decisive strike came at a big moment and ended a stretch of six straight empty possessions.

The senior climbed the ladder, pulled down a high delivery and spun away from defenders for the 52-yard score that gave his team a 17-13 advantage with 9:15 remaining in the fourth quarter.

After another defensive stop, Pyron responded with the knockout punch — an 11-yard scoring strike to Jaquel Fells Jr. off play-action, setting the final count at 23-13.

Pyron completed 13 of his 21 passes for 166 yards and two scores to go with another 74 yards rushing. McKinstry grabbed five receptions for 89 yards, 52 of which came on the go-ahead touchdown reception. Fells added four receptions for 52 yards and the score.

It was, however, a game of runs.

The Region 6 champions started strong, jumping out to a 10-0 advantage with consecutive scores on their first two possessions. Junior running back Michael Sharpe Jr. started things with a 26-yard touchdown run with 9:04 remaining in the first, and junior kicker Zaylen McCray capped off Pinson Valley’s second drive with a 26-yard field goal.

The Indians (12-2) appeared to be on their way to another postseason blowout — Pinson Valley won its first four playoff games by an average score of 38-7 — but Spanish Fort (11-4) had other plans.

The Toros rattled off 13 unanswered to take a 13-10 advantage into the locker room. Sophomore quarterback Brendon Byrd punched in a pair of goal line touchdowns to give Spanish Fort its first lead with 3:49 remaining in the first half. The second of the pair was made possible by a botched Pinson Valley punt (McCray received the long snap with his knee on the Bryant-Denny turf) that set Byrd up with a first-and-goal from the Tribe’s 8-yard line. He hammered it home three plays later on a QB sneak.

The Pinson Valley defense would have all the answers throughout the final two frames, securing a second-half shutout. In six second-half possessions, Spanish Fort was forced into four punts, including three three-and-outs. In their final two drives, the Toros turned the ball over on downs and later ran the clock empty.

Defensive lineman James Perkins led the way with two quarterback sacks and seven tackles in the win. As a unit, the Indians finished with three sacks and 10 tackles for loss.