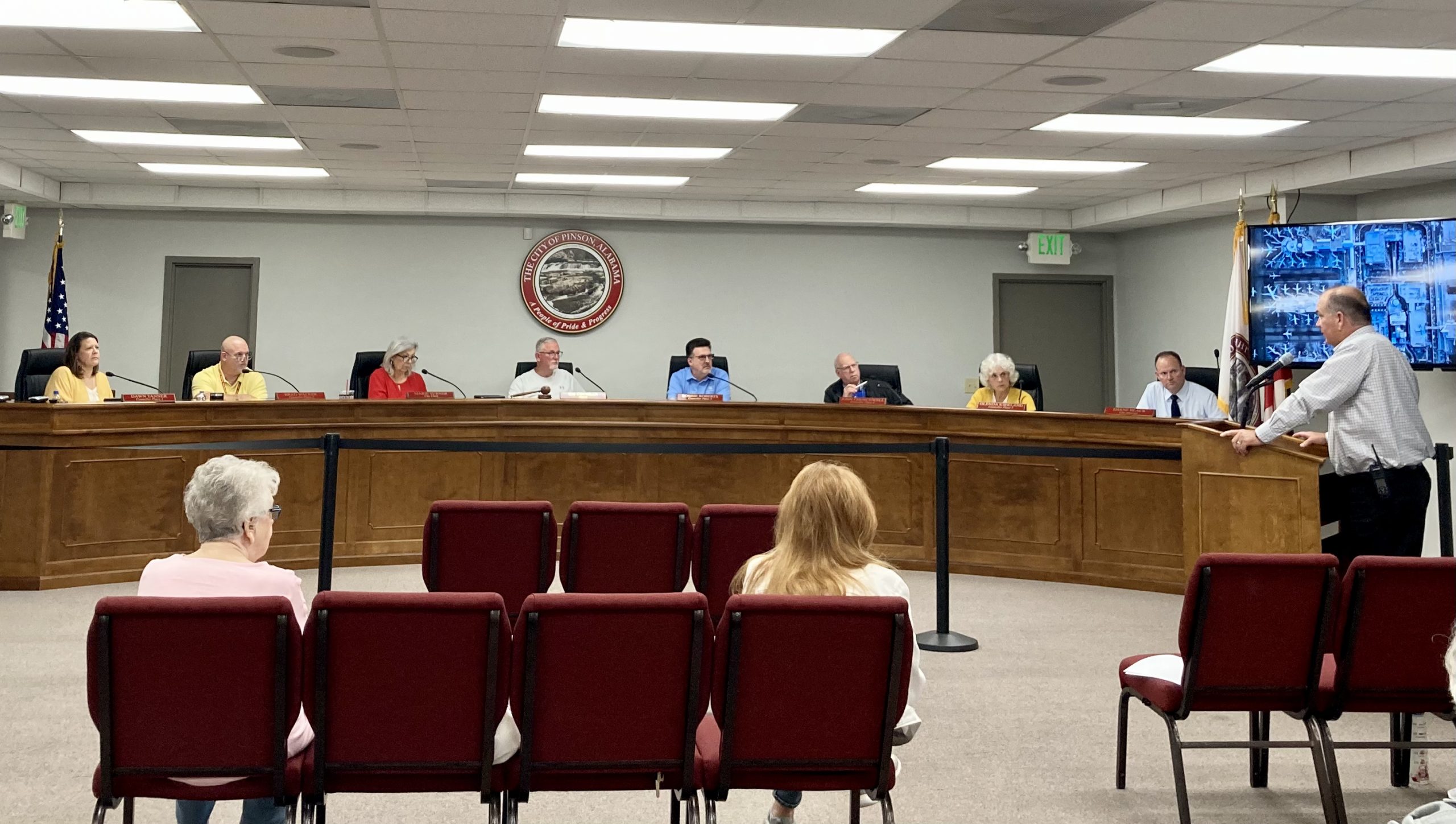 PINSON — The Pinson City Council voted on Thursday, May 6, to approve a $95,000 grant to the Center Point Fire District for the construction of a new fire training facility. The cities of Center Point and Clay have also given $95,000 grants toward the project, which will benefit not only these three communities but multiple fire districts throughout the state.

“It’s not about (Center Point Fire District); it’s about multiple jurisdictions,” Capt. Chris Horn said. “Even the chief from Glenwood, he reached out to us and also found us a grant that we applied for; we have not received it yet.”

Horn said that he hopes to have Phase 1 of the four-phase project complete by August 2021 in preparation for ISO (Insurance Services Office), an organization that rates fire departments.

“If I could have just the training tower up and fenced in by then, then all these municipalities that touch our border are going to get credit for that,” he said.

Some discussion was held concerning the balance of funds requested from each of the local municipalities. Councilor Robbie Roberts had concerns about the financing being split equally between Pinson, Clay and Center Point, rather than split into percentages based on the size of each city. Ultimately, however, the council agreed that the amount requested was not unreasonable and was worthy of the cause.

“The money needs to be there, no matter where it comes from,” Councilor John Churchwell said. “As long as they’re doing a good job with it, that’s what I’m concerned with.”

Mayor Joe Cochran said that he felt the council had taken enough time to consider the grant and asked if anyone would like to offer it in the form of a motion. Churchwell offered the motion and it passed unanimously.

“I do appreciate the blood, sweat and tears you’ve put into this,” Cochran said to Horn. “I know it’s stressful when you’re trying to do something like this and you’re worried about the financing and the weather. I totally get it, and I know it’s been a labor of love for you and everybody else involved. Thank you so much for what you’ve done.”

The council held a brief executive session at the end of its meeting to discuss litigation and real estate with city attorney Shane Black.

Upon reconvening from executive session, the council unanimously passed a resolution to enter into an agreement to resolve claims in a lawsuit, James Hyche vs. The City of Pinson.

“This is a lawsuit that was filed against the city last fall and it asserted claims against the city under the ADA, the Americans with Disabilities Act, saying that there were certain facilities within the city that were not meeting ADA standards,” Black said. “What the city did tonight was it approved an agreement that would resolve the lawsuit.”

The agreement involves improvements to both Triangle Park and Bradford Park. While Bradford Park is not owned by the city of Pinson, the city does lease it from Jefferson County for athletic activities.

At Triangle Park, the city has agreed to make sure one of the picnic tables under the pavilion is handicap/wheelchair accessible, and it will also make sure there is a handicap accessible parking place.

“The city of Pinson is committed to making sure that all of its facilities are handicap accessible and fully supports the ADA and all its regulations,” Black said. “The city of Pinson has done an excellent job over the past several years of making sure that its facilities are accessible. In fact, I’d put the city’s record on accessibility up against just about anybody. I think it’s done a fantastic job with that. This settlement and putting this into place, with respect to these facilities, is something that the city’s happy to do because it wants its facilities to be handicap accessible by all citizens.”

According to Black, James Hyche did not bring any concerns to the Pinson City Council or mayor prior to filing lawsuit.

“The city council is happy to address these issues,” he said. “It certainly prefers that citizens come to it with different improvements that are suggested … The city always prefers to move forward by cooperating with folks as opposed to dealing with them through lawsuits filed against the city.”

During the meeting, the city council approved the following:

The next meeting of the Pinson City Council has been moved to Tuesday, May 18, 2021. The meeting will be held at Pinson City Hall and will begin at 7 p.m., following a pre-council meeting at 6:15 p.m.