MOODY — Approximately 500,000 people from around the world are expected to come to Birmingham during the 2022 World Games. On Thursday, June 10, 2021, the Moody Area Chamber of Commerce heard from an official with the World Games about what is expected and what is needed from the surrounding areas. 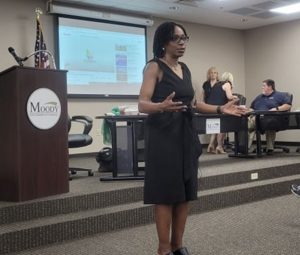 Kathy Boswell, the Vice President of Community Engagements for The World Games 2022, addressed the chamber during its June 10, 2021 luncheon.

Kathy Boswell, the Vice President of Community Engagements for The World Games 2022, addressed the chamber during its June luncheon.

“God really has a sense of humor,” said Boswell. “He’s like, ‘nobody else is going to get a second chance to be able to write a new page in history for their state,’ but He chose Birmingham, Alabama. I’m just really hyped about it. Next year for 11 days, it’s going to be one powerful experience.”

Boswell said the large event will serve as an opportunity for people to tell the world who those in the Birmingham area really are.

“They’re going to see the best of us,” Boswell said. “We’re not perfect and we never will be but we have so many wonderful and good things about our city and about our state and about us as people to be able to showcase.”

The fact that Birmingham was chosen to host the games, Boswell said, means people can see how far the city and the state have come since the Civil Rights Movement.

“We were as divided as we could be,” Boswell said. “And looking like me wasn’t the safest way to be. However, 40 years later, I’m standing in this room and there’s not a majority that looks like me. But do I feel comfortable? Yes, I do. We’re different. So, what that means is, that’s a story we will allow them to see.”

The anticipated economic impact to the area is projected to be around $256 million. Thousands will be staying and eating in the Birmingham area. But Boswell said there is a push to include small businesses in the preparations for the events.

Events will be held at 15 venues including the BJCC, Protective Stadium, Legion Field, Barber Motorsports, and the Hoover Met.

This is the first time the World Games has been held on U.S. soil since 1981. Boswell foresees the large event to be one of unity after a pandemic and other issues people around the globe have been dealing with over the past year.

“In 2022, this is really the first time the world will really come and be united,” Boswell said. “What has happened to us in the year of 2020, I will tell you, for me, there was a lot of impact. For me, one of them is that I lost my son in 2020. He was a 19-year-old wonderfully, I mean, you talk about a gifted young man. But 2020 leveled the field for the world. I don’t care if you were black, white, purple, blue, short, tall, round skinny. The deal is, we all got leveled to know that none of us are better than others.”

When it comes to security in Birmingham, Boswell said there will be efforts to keep people safe.

“Because of the fact that we have a lot of dignitaries coming, a lot of the countries have already brought their security to our city to be able to see if it’s safe or how do they make it safe for their athletes and their dignitaries,” Boswell added. “We do have Homeland Security and every gambit of security levels and agencies working with us and looking at security for the games.”

As for appearance, there will be at least four new murals installed across the Birmingham metro in order to engage communities. Local muralists have been chosen to paint the murals which will be in downtown Birmingham, near Oak Mountain, near the CrossPlex and somewhere near the BJCC, according to Boswell.

Surrounding municipalities are also preparing for the presentation of their cities and towns by organizing cleanups.

Honorary Co-Chairs for the games include Charles Barkley, Randy Owen, Vonetta Flowers, and Noah Galloway. Galloway will run the United States flag into Protective Stadium during the Opening Ceremony.

There is also a need for volunteers ahead of the event and during the World Games. If you are interested in volunteering, go to twg2022.com/volunteer.

The World Games was originally supposed to be held in 2021, but that was changed because of COVID-19.

The following is an outline of dates for the 2022 World Games. You can view more information on the event by clicking here.