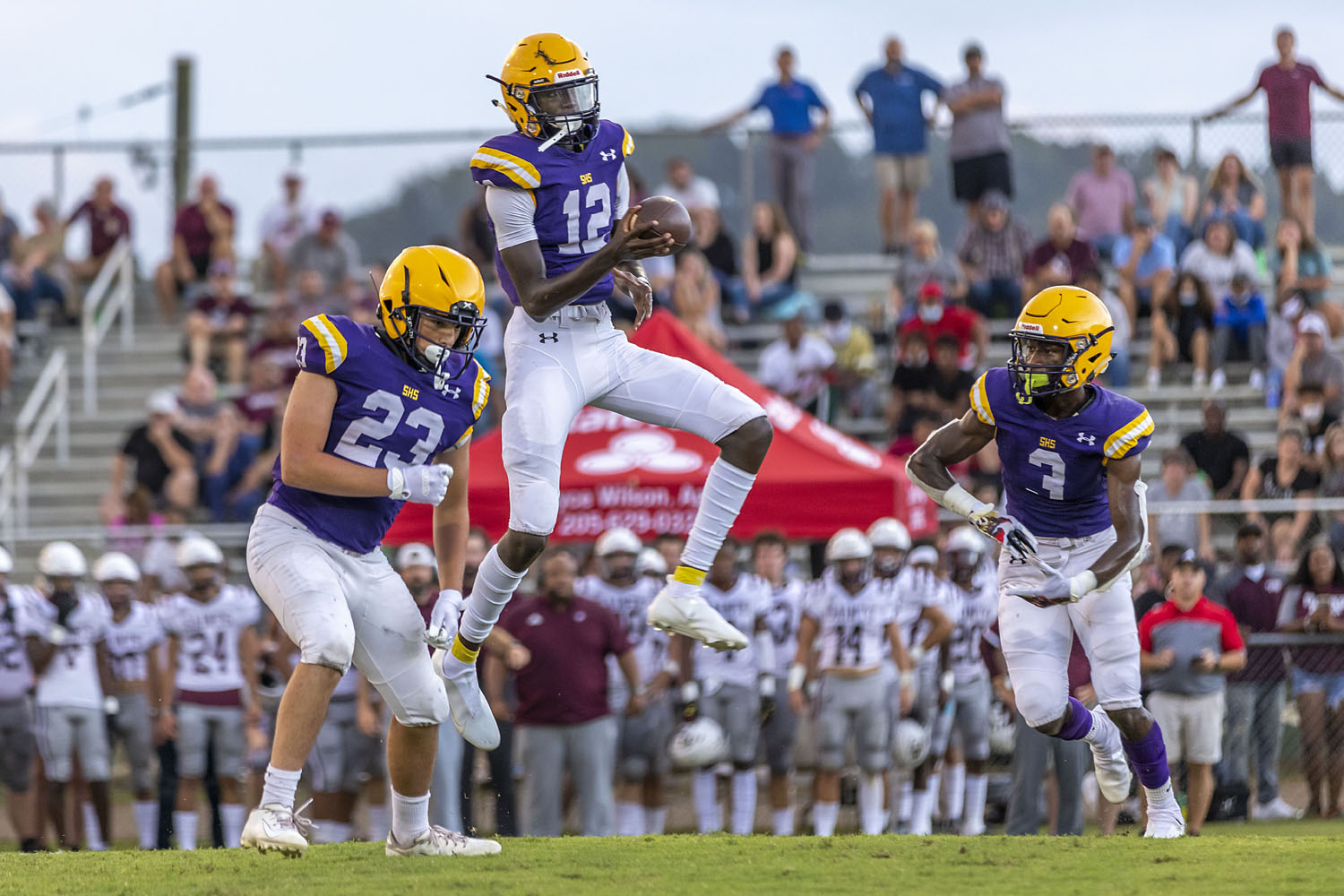 Springville got off to a good start in the Jon Clements era, beating St. Clair County. (Photo by Ron Burkett)

SPRINGVILLE — Friday night, the St Clair County Saints traveled to Springville to begin the season for both teams. In what would be a crazy game at times, Tigers gave new head coach Jon Clements his first win in the purple and gold despite some adversity. 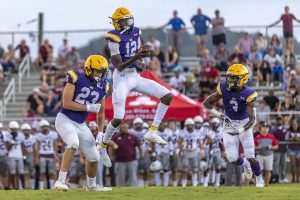 Springville got off to a good start in the Jon Clements era, beating St. Clair County. (Photo by Ron Burkett)

“I was really worried about how we would handle adversity and we didn’t flinch,” Clements said. “I think you want to see adversity in game one and we saw a lot of it. We had kids go down with cramps and other kids step into their shoes and fill them.”

The adversity began after quarterback Ashton Frey was unable to control a high snap on the first offensive drive of the game, giving the ball to the Saints at the 46. On the next play, St Clair’s Nigel Dowdell found Jacoby Blanks for a 54-yard touchdown strike to put the visitors on the board first.

On their next outing, Springville put together a drive that got them close enough for a John Wolf field goal that would get them on the board and make it 7-3 Saints. 2 minutes later, Dowdell dropped back to pass, but this time Springville’s defensive leader Jamel Williams picked it off and took it back 34 yards to put his team up 10-7.

The excitement continued for the home team as Patrick Bennett found paydirt from 11 yards out on the next offensive possession and, after holding St Clair to a second consecutive punt, Frye found Jamel Williams for an impressive 62-yard touchdown with 1:33 left in the first quarter. The opening stanza would end with Springville holding a commanding 23-7 lead.

“Ashton’s got to play better,” Clements said. “He had a big run on a broken play. We’ve got to find a way to throw the ball. We can’t just run the ball against everybody in our region.”

The second quarter would continue to excite the crowd as St Clair running back Jackson Lindsey burst down the field for a 75-yard touchdown run. Not to be outdone, Frye called his own number from 68 yards out and put his team up 31-14. After a penalty on the kickoff, St Clair found themselves backed up at their own 8 yard line and Ryan Parker took it to the house from 92 yards away to close the gap to 31-21 at the 7:30 mark and that is how the half would end.

Neither team could find any traction in the third quarter, swapping interceptions and fumbles and punts; however, the fourth quarter offered up more fireworks. Early in the fourth, Frye would fumble another high snap and the Saints would recover at the 1, with Dowdell punching it in and making it 31-28. Springville found a little traction but could not put points on the board. Wolf hit a punt that would back the Saints up to their own 10 yard line.

After a roughing penalty on a 3rd and long, St Clair looked to have a second wind but Matthew Wolf would pick off a Dowdell pass to give the ball back to Springville, who marched down to the 1 and Frye would punch it in from there. St Clair found little success with 1:29 left in the game and the coffin was nailed shut on consecutive sacks by defensive captain Cody Abts. “That’s why he’s the captain. Cody Abts is who Cody Abts is.”