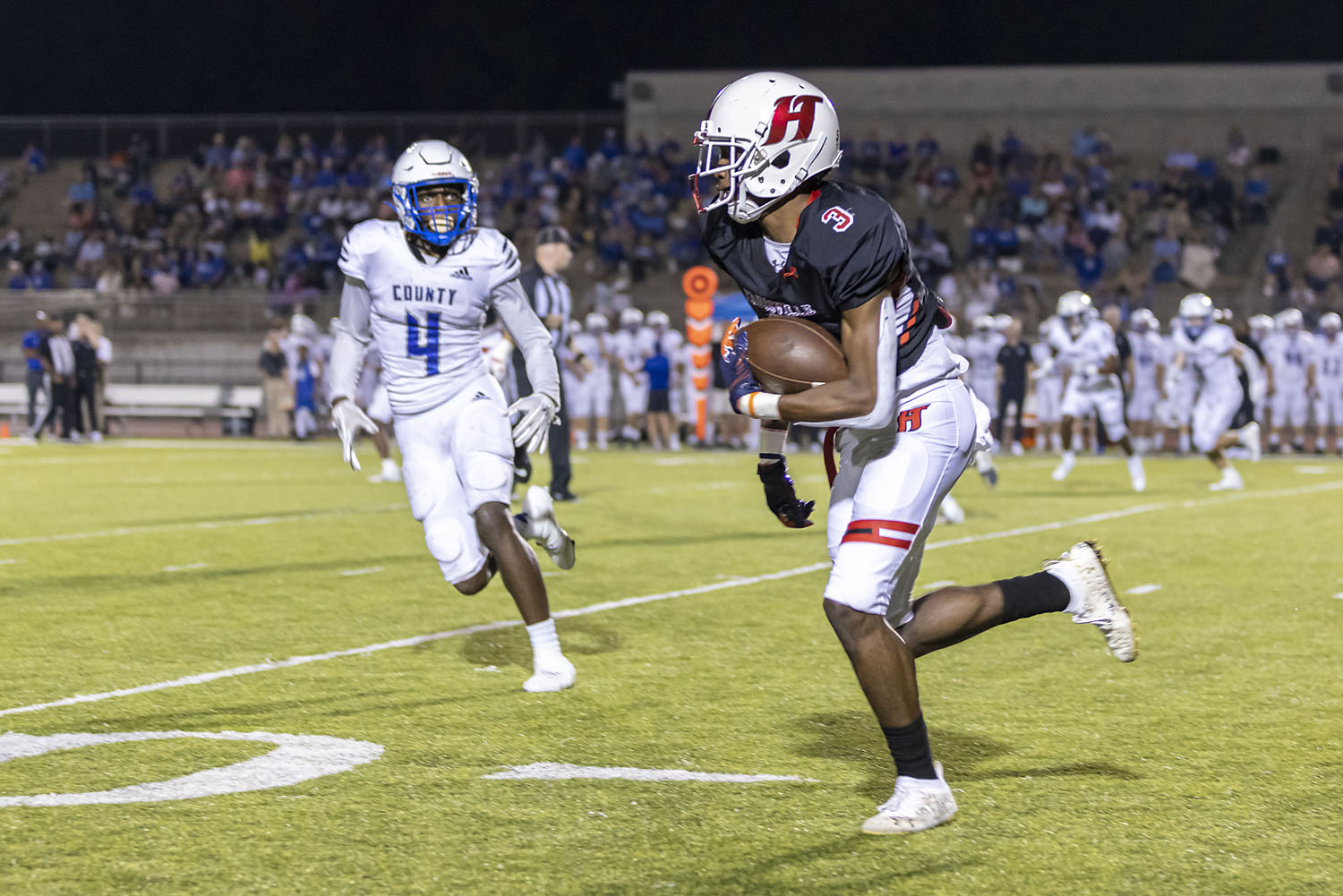 TRUSSVILLE — A garbage-time touchdown is all that stood in the way of Hewitt-Trussville here Friday night as the Huskies romped all over Tuscaloosa County, 42-7. 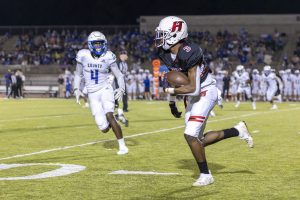 Omari Kelly and the Hewitt-Trussville Huskies are 4-0 after beating up on an overmatched Tuscaloosa County squad, 42-7. (Photo by Ron Burkett)

Senior wide receiver Ryan Shoop played his best game of the seasons, catching five balls — two of those for critical first downs to keep drives moving — and a touchdown from Cade Ott Carruth to help the Huskies go up 28-0 at the half.

“I just tried to play my game,” Shoop said. “On that touchdown, I was just thinking ‘I hope I catch it.'”

A defensive stand sent Tuscaloosa County backward, and as they lined up for a field goal try, the Huskies stuffed the middle, and someone in the pile — it was impossible to tell who — got a hand on the ball to send it spinning away.

Hewitt-Trussville got the scoring started with a 16-play drive that ended when Carruth hit Jordan McCants for a 15-yard touchdownwith 6:49 left to go in the first quarter. Riley Rigg, who hasn’t missed an extra point so far this season, drilled the extra point and the Huskies were up 7-0.

After Bam White and Hunter Jones poured it on defensively, the Wildcats were forced to punt after only three plays. Tuscaloosa County would get the ball right back after a James Hammonds fumble, but Riggs Dunn stepped in front of a Brax Garrison pass to take the ball right back for the Huskies.

The Huskies then put together a 9-play drive that ate the clock, racking up four first downs before Carruth scored on a one-yard run with 1:14 left in the first quarter. Rigg’s PAT was good, and the Huskies led 14-0.

The Wildcats couldn’t do anything on offense again, with linebacker White breaking up a pass to force fourth-and-seven. But a muffed punt gave the ball back to Tuscaloosa County, and the defense was back on the field.

Hammonds capped a five-play scoring drive with a five-yard TD run, and Riggs added the PAT. With 10:42 to go in the second quarter, it was 21-0, Huskies.

On a 12-play drive in which the Huskies converted five first downs, the Huskies went up 28-0 with 11 seconds left to play in the half when Carruth found Shoop for a nine-yard score.

White and Tyrell Averhart took turns chasing down Tuscaloosa County’s Garrison, hounding him all night. At the half, the Wildcats had -1 passing yards.

The Hewitt-Trussville varsity offense would add one more score when Carruth ran for another touchdown, taking a 13-yard jaunt to paydirt with 4:20 left in the third quarter to make it 35-0.

With the second-team offense in, Peyton Floyd ran tough between the tackles to a four-yard touchdown with 6:59 left to make it 42-0.

Tuscaloosa County was finally able to move the ball against the Huskies’ second unit, with senior wideout Gavin Gardner breaking open in the middle of the end zone to catch a touchdown pass with 2:26 left in the game to make the final 42-7.