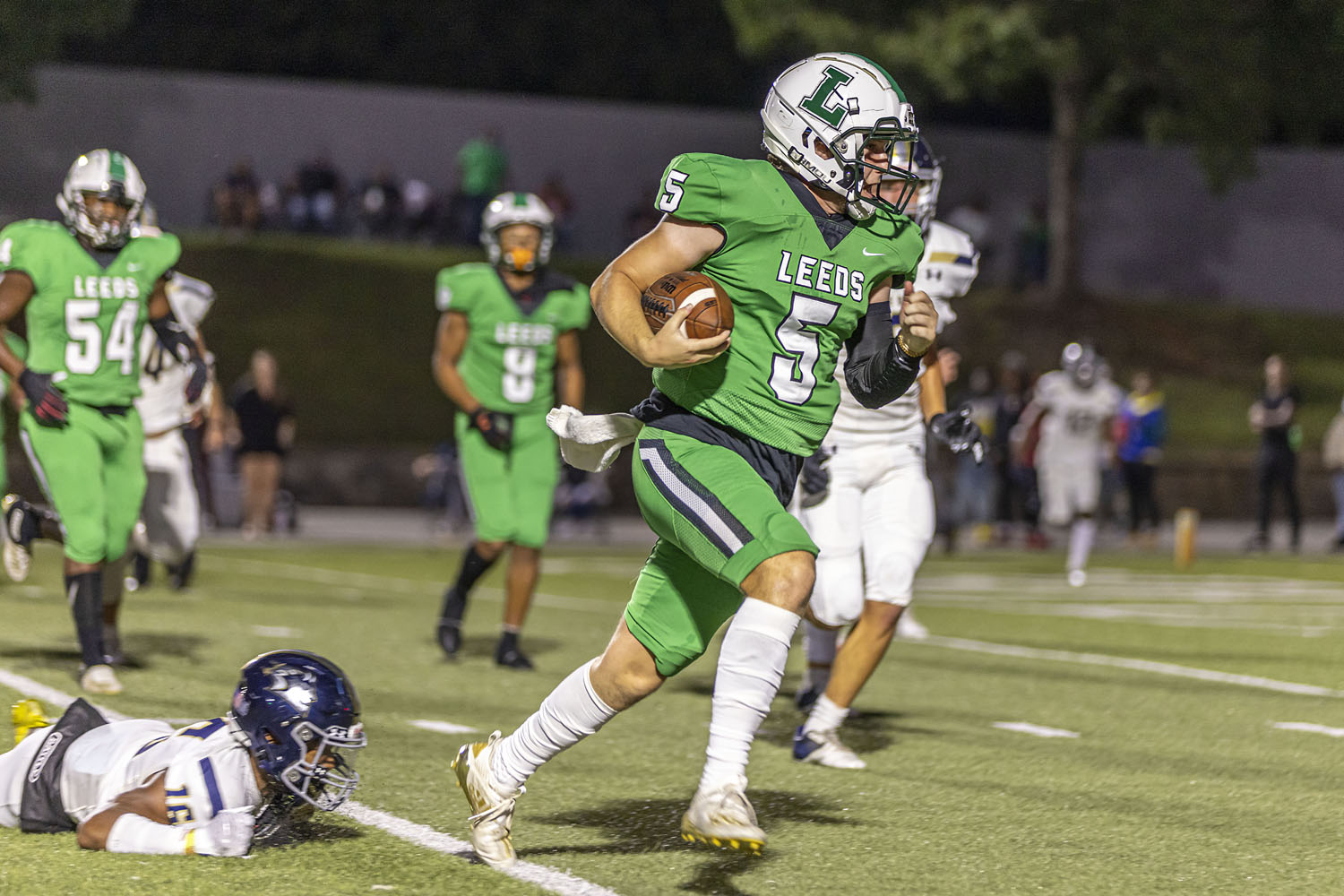 Leeds quarterback Jarod Latta tucks the ball and runs for yardage against Moody. The Green Wave remains undefeated at 4-0. (Photo by Ron Burkett)

Leeds takes the Battle of the Bridge, deals Moody first loss of season

LEEDS — The atmosphere on Friday night at Homer Smiles Field felt special, as undefeated neighbors met in front of a packed house. 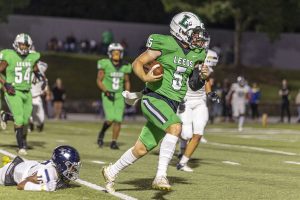 Leeds quarterback Jarod Latta tucks the ball and runs for yardage against Moody. The Green Wave remains undefeated at 4-0. (Photo by Ron Burkett)

Leeds senior Rametrius Yelverton, though, called it “just another game for me.”

The senior finished with 162 of Leeds’ 375 rushing yards against Moody, scoring three touchdowns.

“I just told my boys to give me a little push, and it was money time,” he said. “Give me three seconds, and I’m gone.”

That offensive effort from Leeds (4-0, 2-0) was enough to withstand an effort from the visiting Blue Devils (3-1, 1-1), who opened the scoring with a 35-yard touchdown from AJ Wallace to junior wideout Davion Dozier on only the third play from scrimmage. It was the first of 3 scores for Dozier, who finished with 148 yards receiving. Wallace accounted for 342 of Moody’s 345 total yards on Friday.

“The overriding theme of the night for me, was how much respect that Moody made us get for them,” said Leeds head coach Jerry Hood. “(Dozier) is the real deal, and (Wallace) is the real deal.”

But the Leeds offense was equally unstoppable. Leeds’ Devonte Megginson gave the Green Wave the lead on the ensuing possession, with a 2-yard touchdown run. Quarterback Jarod Latta scored on the following drive, from 10 yards away.

By halftime, the Green Wave led 26-13, and had not yet lined up in punt formation. They would punt only once the entire game.

“(Moody’s) type of offense is going to get some plays, and you just have to keep playing,” Hood said.

After a scoreless third quarter, Wallace and the Blue Devils sprang to life with an 80-yard drive to open the fourth quarter. His third touchdown, a 5-yard toss to Dozier, made the score 26-19 with just over 9 minutes to play.

Leeds’ Jeremiah Hunter put the game away, however, breaking free for a 56-yard touchdown run on the next possession.

“At the end of the day, I think we’re leaving a better football team than we came over here,” said Moody head coach Adam Wallace. “We just gave the No. 4 team in the state everything they wanted, so we got to learn from it and get better.”

The atmosphere in pregame was truly special, with fans packing the grandstand and ringing the field on all sides.

Wallace called it “what high school football’s all about,” and Hood agreed.

“Really, I was so proud of Leeds and Moody, the cities, being together, packing out Homer Smiles Field,” he said. “That’s good high school football.”

Leeds will host Hayden next week for Homecoming. Moody will return home to face Center Point.