TRUSSVILLE — First responders from Jefferson and St. Clair Counties were honored on Friday, Sept. 10, 2021, during a luncheon at Jefferson Memorial Gardens. 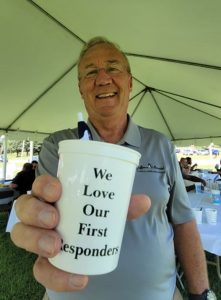 Jefferson Memorial President Eddie Seal said the annual event is a way to show appreciation to police, fire, EMS and all other first responders. A LifeSaver helicopter also landed on the cemetery ground for the event. The timing of the luncheon isn’t a coincidence. It coincides with the anniversary of the terror attacks on Sept. 11, 2001.

“This is 20 years since 9/11 and we have a very good relationship with the police because we deal with them from time to time,” Seal said. We just wanted to show our gratitude for everything that they do for us.”

Hundreds of emergency responders were killed in New York City when two planes slammed into the World Trade Center in 2001. Of those, 343 were firefighters, 64 were police officers, and eight were emergency medical technicians.

For the luncheon in Trussville, Sen. Shay Shelnutt and Rep. Danny Garrett were on hand. The guest speaker was Jefferson County Commissioner Joe Knight.