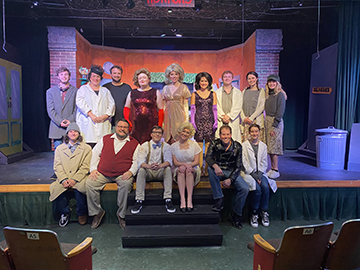 TRUSSVILLE — Trussville’s ACTA Theater opened its performance of Little Shop of Horrors to the stage this past weekend which is “Bigger than hula hoops!” Seymour and Audrey II wrap their vines around the audience and pull them in for a show not to be missed.

The musical follows character Seymour Krelborn (Daniel DeShazo), a nerdy orphan who works at Mushnik’s, a flower shop in urban Skid Row. While working there, he develops a crush on his co-worker Audrey (Allie Picou) while being constantly berated by their boss. One day he finds an unknown plant he calls Audrey II. Unlike any other plant, this one craves blood and begins to sing for food. Seymour feeds the plant Audrey’s boyfriend, which follows a downward spiral of events leaving the audience wondering if Audrey II will take over the world or if he will become defeated.

The show’s famous music is by Alan Menken with book and lyrics by Howard Ashman. Little Shop of Horrors is based on the film by Roger Corman and musical staging by Edie Cowan is presented by ACTA under the direction of Kristen Campbell with choreography by Paula Brown.

Campbell, who has directed past performances such as Annie and the Music Man, shares that shares that the story line was a bit out of her comfort zone, but that the cast worked so diligently to take a chance on an unknown.

“The folks on Skid Row,” Campbell said, “are selfish, hopeless, depressed, trapped, and yearning for a life of peace and comfort. So much that they are willing to lie, swindle, cheat, chop someone to bits, and feed them to a wild plant from outer space in order to get ahead in the world.” 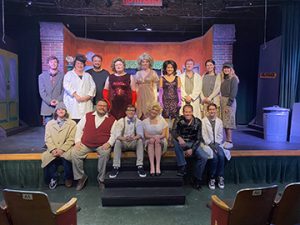 Campbell adds that the COVID pandemic has made everyone feel uncertain and unknown about the future.

“With a brilliant script, radically beautiful score, and a cast with entrances you to forget, we can easily step away from our world keeping in mind our own “Skid Rows,” which is usually the point of the theater since we can sit back, be entertained, and walk away with a new energy and sometimes, a new hope.”

“The cast is so delightful and gifted,” Campbell said. “The cast provided their own wardrobe and brought an appreciation to what it takes to put a show in this caliber together to the community of Trussville. We have worked so diligently to take a change on an unknown.”

Tickets are $15 adults, $12 seniors, $10 students and available for purchase at www.ACTATheater.com. ACTA Theater is located at 225 Parkway Drive, Trussville, AL 35173 next to the Trussville Public Library and Cahaba Elementary School.