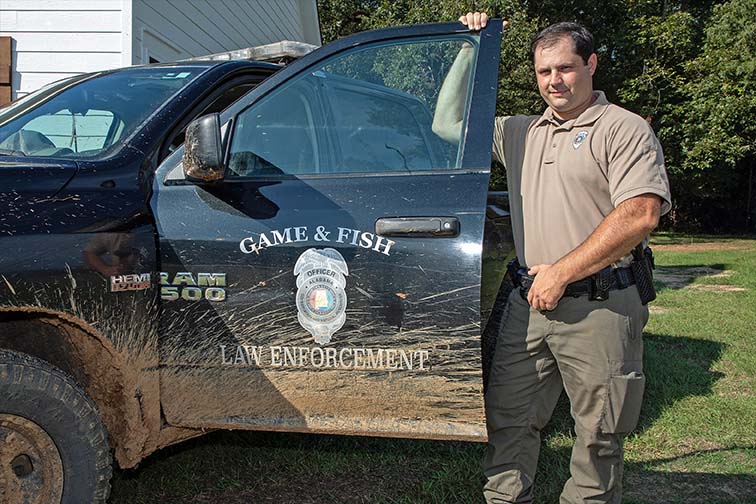 Hill and searchers were all smiles after the lost child was found safe at 2:45 a.m. (Photo courtesy of Billy Pope)

A missing child may be the most frightening situation a community can imagine, and sometimes it takes a seasoned tracker to yield a successful outcome. 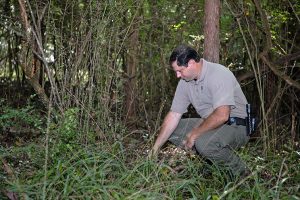 WFF Conservation Enforcement Officer Chris Hill arrived at the site after the search for the missing 3-year-old had already started. (Photo courtesy of Billy Pope)

Hill was called by a local farmer who asked if Hill had heard about a missing child. He hadn’t.

“I called the sheriff, and they were looking for a child in the woods,” he said. “I said if he’s in the woods, I’m coming to help.”

The WFF maintains a K-9 unit for tracking fugitives and missing persons, but none of the dogs were available at the time. So when Hill arrived at the site, the first rule of tracking – don’t compromise the search site with human scent – was already out the window. Unfortunately, in a situation like that, human nature is to venture into the area where the child was last seen and walk around looking for him. People do this out of the best of intentions with a genuine desire to help. Often, however, this makes the search much harder for those who come later.

“When I got there, I guess it had been put on social media because there were already 100 people there,” he said. “I found the sheriff when I got there and got an update. The daddy was cutting grass, and the little kid was in the backyard, playing like he always does with his dog. So the dad went to cut grass in the front yard.”

When he came back around to the backyard, his son had disappeared. When the youngster wasn’t found inside the house, the father called for help. When Hill arrived, a rescue squad was starting a grid search.

“There were two hunting roads, basically fire breaks, that lead in directions behind the house,” Hill said. “Before I got there, the rescue squad had a bloodhound that tracked something to a food plot about 350-400 yards behind the house, but the dog lost the scent at the food plot.”

Hill said between 40 and 50 people performed the grid-search with flashlights behind the house and found no sign of the child. 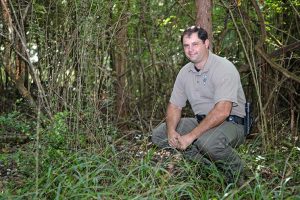 Hill used his tracking skills to find a small footprint that was crucial in finding the youngster. (Photo courtesy of Billy Pope)

“After the grid search, we were coming back,” Hill said. “I wasn’t aware they had used a bloodhound before I got there, and somebody said the bloodhound had tracked the kid to a green field. So I told the sheriff I was going back to the green field and look around.

“I had two deputies with me, (Ryan) Holena and (Devin) Lincoln, who I had worked with before I became a Game Warden. So when we got down there, I looked around and told them, ‘This is a 3-year-old boy. He’s not going to walk through these briars,’ because it was thick.”

They looked around the food plot in the young pines, searching for any trails the youngster may have followed. When they got to the bottom of the food plot, they realized several ATVs had driven through the field looking for the boy.

“We found a four-wheeler trail at the bottom of the field that looked like it hadn’t been used since last hunting season,” Hill said. “We went down that trail, and it was pretty steep. It was mostly pine straw, but I could tell something had walked through there. The pine straw was turned. We kept going, and all of a sudden, there were a couple of briars across the path and drug downhill. I told them something had definitely been down this trail.

“Then it turned to a hardwood bottom, and I thought we would be able to pick up any footprints. That’s when I found something. I told them it was small, but it was definitely a human footprint. So we had to find out if the search party had been down here. If not, the child had come that way.”

Despite calling Eli’s name often, the men didn’t hear a response. So they decided to go back to the house and charge their flashlights. Hill found out nobody had been to the area in the hardwood bottom, and he asked about getting a dog to search that area.

A Red Mountain Search Dog Association team had just arrived at the scene and was tracking in an area that had undergone the grid search but with no positive results.

Hill then told the team about tracking somebody down the hill to the hardwood bottom, where he found a footprint. So they went to that point and released the dogs.

“The dogs walked all over the hardwood bottom while we yelled, ‘Hey, Eli,’” he said. “I guess it was a good 30 minutes later, and they came back and said they just didn’t have anything.”

Hill said a little after 2 a.m., the ALEA helicopter had to go to Montgomery to refuel. He suggested making a horseshoe search around the bottom perimeter of the green field.

Instead of giving up, Hill and the deputies took advantage of the absence of helicopter noise to continue shouting Eli’s name.

“All of a sudden, about 50 yards ahead of us, I said ‘Eli’ and, to my surprise, Eli responded back, ‘Hey,’” Hill said. “I jogged over to him. He’s lying on a fallen stump, and his puppy is lying right between his legs. I picked him up and said, ‘Hey, Eli, how are you doing?’ All he wanted to do was show me his puppy. I told him, ‘Yeah, baby, I see your puppy. That’s a good puppy.’ He was in good spirits. His legs were cut up from walking through the briars all night. Then he wanted to tell me about the stars he had been watching. He wanted to find the moon. I told him we’d go find it.

“He was not scared at all, like I figured he would be after sitting out in the woods all night. It was about 2:45 when I scooped him up. I was just glad to get him out of the woods.”

Hill lamented that one of the WFF K-9 dogs wasn’t available. 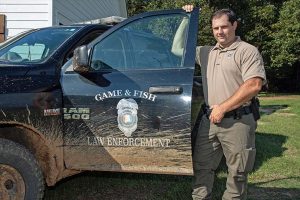 Hill and searchers were all smiles after the lost child was found safe at 2:45 a.m. (Photo courtesy of Billy Pope)

“If my partner, Jason McHenry, and his dog had been there and I’d have put him on that track, I promise you we’d have gone straight to that boy,” Hill said. “Jason’s dog went 2 or 3 miles looking for a turkey poacher last year and caught him. So I know for a fact that if our beagle had been there, he would have found that boy.

“We found him about 350 yards from that green field. I sure am glad I recognized those tracks.”

“Sight tracking, or the act of reading those visual signs left behind as a person or animal passes through an environment like a wooded area, is a fundamental skill that every Alabama Game Warden learns early,” said WFF Law Enforcement Section Chief Michael Weathers. “They will continue to use and hone that skill every day of their career. They are the subject-matter experts when it comes to detecting and tracking people in the woods. In the greater law enforcement community, each agency has its own special resource to offer. Like the air assets that ALEA brings to events like this or the tracking dog teams that the Alabama Department of Corrections offer, we are always happy to volunteer the ‘off pavement’ tracking skills that our officers possess. When the opportunity to put tracking skills to work saving lives arises, you can expect an officer like Chris Hill to be the first to arrive and last to leave. He has the talent and works ethic to make a difference.”