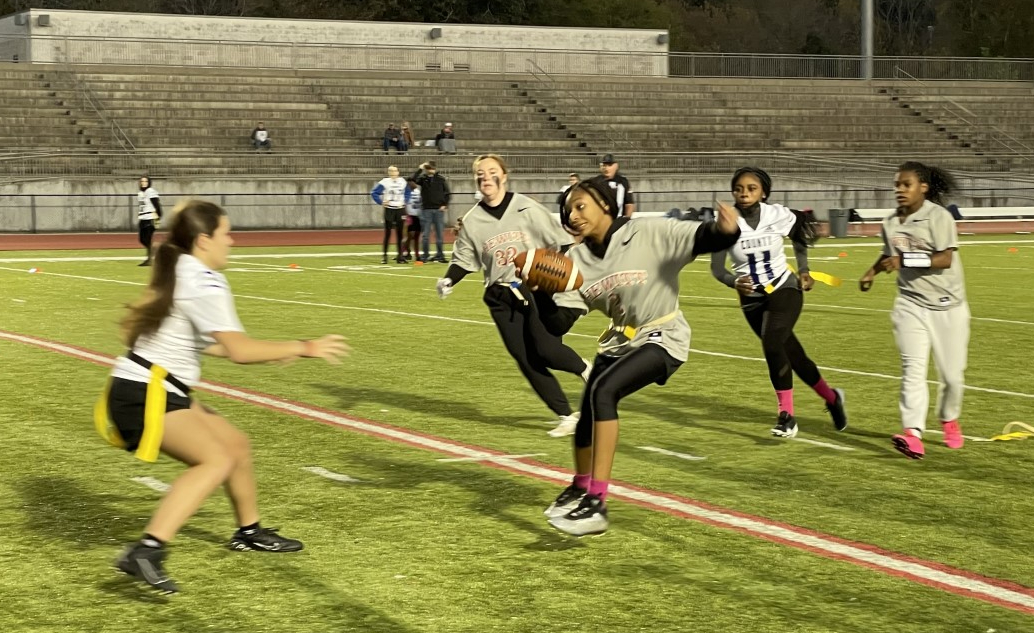 Hewitt-Trussville flag football moves on to semifinals with win vs. Tuscaloosa County

TRUSSVILLE — By the time Tuscaloosa County scored, it didn’t matter — the Hewitt-Trussville flag football team had put the visitors to bed early in the second half of a 42-7 quarterfinal playoff victory that wasn’t as close as the final score made it seem. 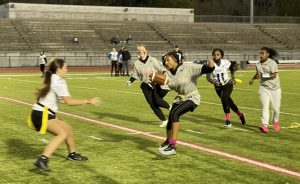 The Huskies, now 9-0 and region champs, were led by Jordan Hunter, who put the first score on the board with a pick-six with 9:40 left in the first half. A PAT conversion made it 7-0, and Hewitt-Trussville was just getting warmed up.

Deandrea Powell scored next for the Huskies, bringing the score to 14-0 with 2:43 left in the half and then Lily Burford, a junior soccer and basketball player picked off another errant Tuscaloosa County pass. Avery Huffstutler crossed the goal line for Hewitt with mere seconds left in the half to make the score 21-0.

Hunter struck again within the first minute of the second half to make it 28-0, while Lily Burford scored to make it 35-0 and the Huskies mushed on.

“I think what makes this a great team is that these kids were always in the same hallways,” said coach Tonya Hunter. “And now they’re connected. They’re a unified team. If you watch tonight, there’s not one kids who’s for themselves tonight. They’re all cheering for each other. When there’s a play made, it’s like they all made the play.”

That sense of unselfishness and chemistry has ushered the Huskies into the semifinals of the 7A flag football playoffs.

“They’re a bunch of bulldogs out there,” said coach Taylor Burt. “They’re out there trying to kill folks. I mean, honestly, we had to kind of knock down the aggression after the first week or so because they really want to get after it. They’re fiery.”

The squad is made up of athletes who came up playing other sports. Hewitt-Trussville’s softball, basketball, track and soccer teams are well-represented on the team, which was formed during the the Alabama High School Athletics Association’s first year recognizing flag football as a women’s sport.

The response by the players has been phenomenal, the coaches say.

“They’re aggressive,” Burt said. “They really are go-getters. They love to compete, which is fun to watch.”

Fans will have another chance to watch this Husky team as they host Oxford next Tuesday in the semifinals of the state playoffs.