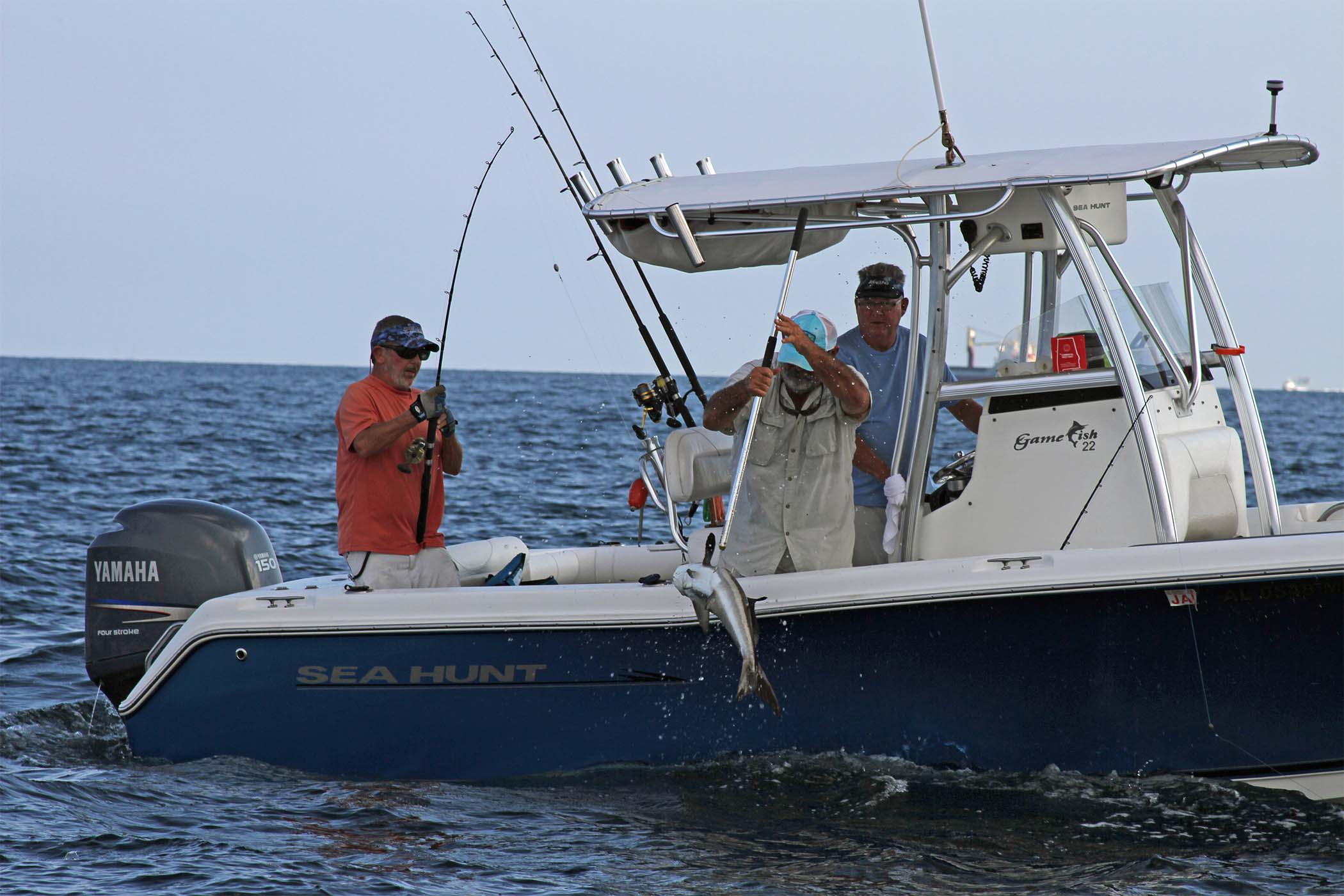 The Gulf of Mexico Fishery Management Council voted to recommend a reduction in the daily bag limit to one fish per person with a 36-inch minimum fork length. (Photo courtesy of David Rainer) 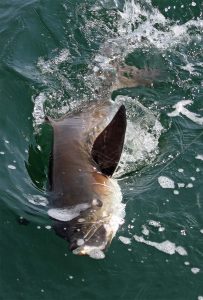 Despite the number of anglers on the boat, a limit of two fish per vessel was also recommended. (Photo courtesy of David Rainer)

As they migrated from south Florida to the western Gulf, the annual spring run of cobia was a treat Alabama’s anglers once enjoyed, but it is now more of a memory.

At its meeting last week in Orange Beach, the Gulf Council voted to reduce the daily possession limit to one fish per person and create a two fish per vessel limit for recreational and commercial sectors.

The cobia stock is managed jointly by the Gulf Council and the South Atlantic Fishery Management Council, which will need to agree to the management changes before submitting them to the Secretary of Commerce for approval.

Kevin Anson, Chief Biologist with the Alabama Marine Resources Division (MRD) and Alabama’s representative on the Gulf Council, said a recent update on a cobia stock assessment prompted the action. The assessment said the stock is undergoing overfishing but is not overfished.

“Overfished means the overall population of fish is below a level that allows maximum sustainable harvests on a continuing basis,” Anson said. “But cobia’s current rate of annual fishing mortality is too high, which, over time if left unchecked, could lead to an overfished condition. That’s why it is considered to be undergoing overfishing.

“What this means is we haven’t gone over the cliff, so to speak. However, cobia have not yet responded to other management measures, so additional measures need to be taken.”

One of the fastest-growing fish in the Gulf, cobia can reach a 36-inch fork length in as little as three years, said Ryan Rindone of the Gulf Council’s technical staff at last week’s public hearing on cobia. Rindone’s presentation indicated a one-fish bag limit would reduce the recreational sector catch in the Gulf Zone by 1.2 percent, and the 2-fish vessel limit would reduce the recreational sector catch by 9 percent.

Anson said the Gulf Council cited several reasons for not increasing the minimum size in the Gulf Zone.

“It was just a few years ago that we increased the size limit in the Gulf from 33 to 36 inches,” Anson said. “There hasn’t been enough data compiled to see if there was a positive impact. Anecdotally, we know the population is much less than what it had been 10-15 years ago.

“If you increase the size, you would keep more females as they are generally larger than males, and the larger fish are breeder-size females. Since this is a joint amendment, we want to try to get to consistent regulations even though we are two different councils. For consistent management in Florida, I think it would be beneficial for the size limit to be 36 inches in all of their waters.” 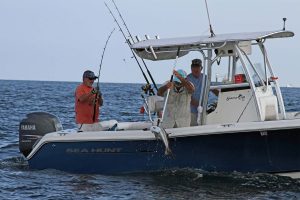 The Gulf of Mexico Fishery Management Council voted to recommend a reduction in the daily bag limit to one fish per person with a 36-inch minimum fork length. (Photo courtesy of David Rainer)

Rindone’s presentation indicated that an increase in minimum size from 33 to 36 inches in the Florida East Coast Zone would result in a 33.9 percent reduction in recreational harvest.

The springtime ritual of following the cobia migration in nearshore waters has virtually disappeared off the northern Gulf Coast.

“What we’re hearing locally is there’s been a precipitous drop-off in cobia since about 2010,” Anson said. “It’s been steadily declining. We’re continuing to hear from our fishermen that it’s not at where it was in the not-too-distant past.”

“The MRIP-FES has shown almost twice the landings for most of the high-profile species compared to the old telephone methodology,” Anson said. “Because of the increased potential for increased volatility in recreational landings and because of the prolonged period of reduced catches, an annual catch target (ACT) has been proposed for use in management to work as a buffer to ensure we don’t go over the annual catch limit.”

Typically, an ACT is set below the catch limit and, if met, will trigger closure of the fishery earlier than if the annual catch limit is used.

Anson said if the South Atlantic Fishery Management Council agrees with the Gulf Council’s actions, the amendment could be sent to the Secretary of Commerce for approval after review by the National Marine Fisheries Service (NMFS) Southeast Regional Office and a brief public comment period. Until that action is finalized, the Gulf Zone will be operating under the current quota, size, and bag limits. The cobia season is currently open year-round. If the harvest is projected to reach the annual catch limit, the season would be closed for the remainder of the year.

“If the recommended actions are approved by the Commerce Secretary, the biggest impact for our fishermen will be a smaller bag limit of one fish per person and the two-fish vessel limit,” Anson said. “The change was made to stay within the annual catch limit, to constrain harvest at a level to promote a faster, more positive rebuilding schedule.”

In other action, the Gulf Council recommended a substantial increase in the red grouper catch limits, although that will have little effect on anglers who fish in waters off of Alabama.

“About 99 percent of red grouper are caught off of Florida,” Anson said. “We used to catch them with some consistency, although low, in the ’90s and 2000s. Now, I would consider them to be uncommon to rare off of Alabama. Our catches might be up to a few thousand pounds, but that usually is in a year when we’ve had some kind of tropical system, a tropical storm or hurricane, that caused the fish to move around with the current and end up in our waters. We don’t have the juvenile habitat to sustain red grouper populations. The storm events push fish our way.”

The Gulf Council also discussed dolphin and shark depredation issues that anglers often encounter. Dolphins, a federally protected species, are known to follow private recreational and charter boats and pick off any undersized fish returned to the water. Anglers also encounter increased shark predation when hooked fish are attacked by the sharks and the angler reels in a mangled fish.

Anson said NOAA Fisheries’ Highly Migratory Species officials made a presentation on known depredation issues in preparation for developing a report as instructed by the U.S. Congress.

“Congress had asked NMFS for a report on the status of data collection, the magnitude of the problem and potential solutions to address dolphin depredation and shark depredation in coastal fisheries in the South Atlantic and Gulf,” Anson said. 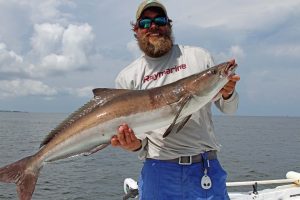 The cobia is one of the fastest-growing fish in the Gulf and can reach 36 inches in as little as three years. (Photo courtesy of David Rainer)

As part of the Red Snapper Reporting System, aka Snapper Check, Alabama anglers have been questioned about dolphin and shark sightings, depredation, and fishing gear entanglement in surveys at boat docks for the past two years.

“If the anglers did have any interaction, we ask how many fish were removed by the dolphins and sharks from their lines; how many fish were eaten after being discarded; and if there was any entanglement in their gear,” Anson said. “We included those questions in the dockside survey because our impression is there is not much information about what the extent of depredation is in those two species groups. We offered to share that information with NMFS to provide information for possible inclusion in their report to Congress.”

Anson said research is being conducted to see if acoustic devices might reduce dolphin interactions while minimizing harm to the animal. The Gulf Council does not have any responsibility for the management of sharks. Federal law governing fisheries management in federal waters directs NMFS to manage sharks independent of the Council process. Anson said the Council asked NMFS for more frequent shark assessment updates, but to alter current management responsibility would “literally take an act of Congress.”