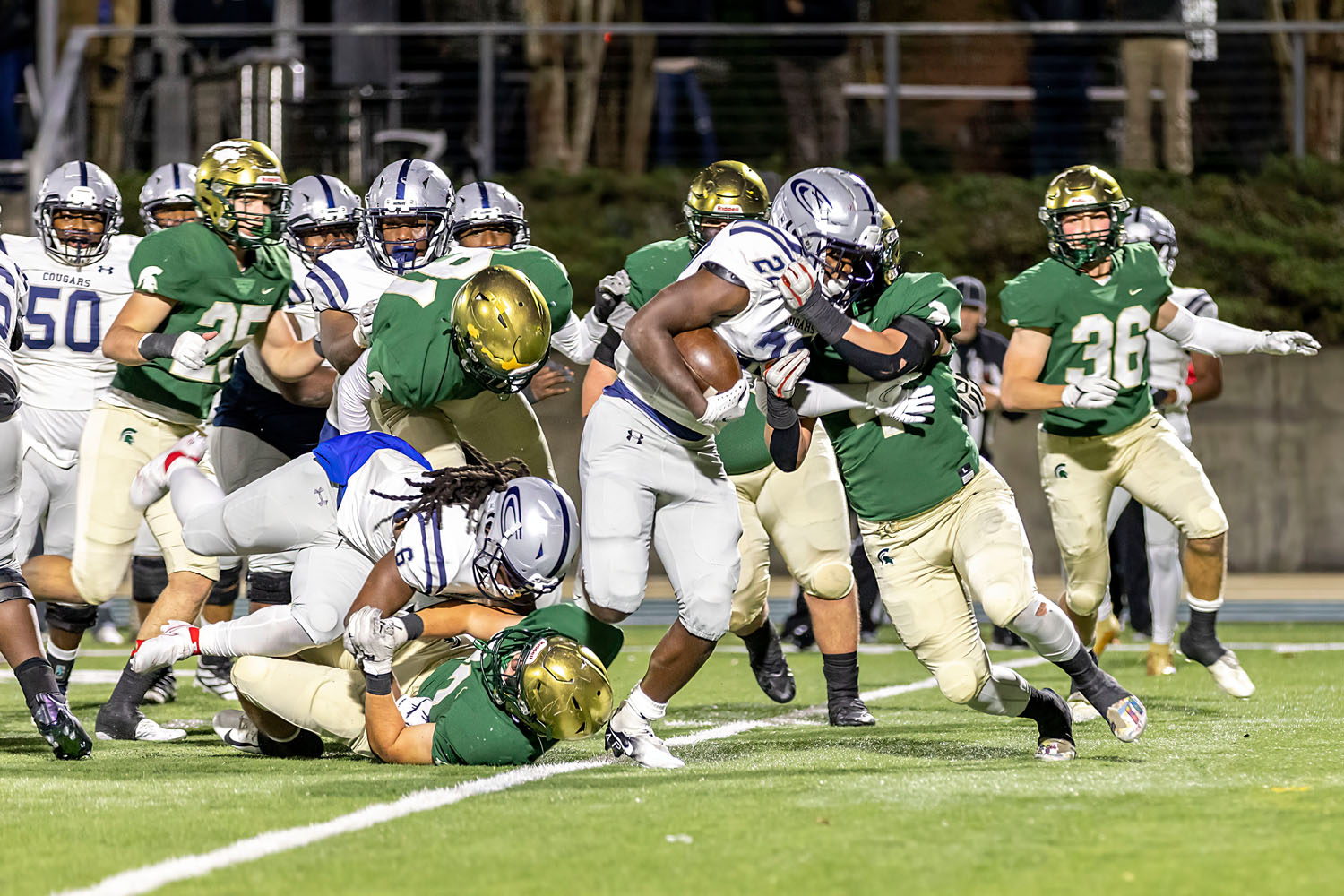 Ed Osley scored three times and the Clay-Chalkville Cougars came from behind to beat Mountain Brook to reach the finals of the 2021 AHSAA 6A football playoffs. (Photo by Ron Burkett)

MOUNTAIN BROOK — It came down to defense. 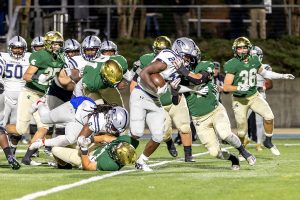 Ed Osley (22) scored three times and the Clay-Chalkville Cougars came from behind to beat Mountain Brook to reach the finals of the 2021 AHSAA 6A football playoffs. (Photo by Ron Burkett)

With less than 30 seconds remaining in Friday’s 6A semifinal game, Mountain Brook had two shots to tie Clay-Chalkville and potentially go ahead. But both of John Colvin’s final passes fell incomplete and the Cougars escaped with a 24-18 victory to reach the 6A championship.

The Cougars (14-0) struggled offensively for most of the game as the Spartans dropped two safeties deep to try to keep receivers Marquarius White, Jaylen Mbakwe and Mario Craver in check.

It worked, for the most part, leaving the score tied 18-18 going into the final 1:22 of the game. That’s when Khalib Johnson hit Craver in a pass on the left-hand side of the field. Craver crossed through the heart of the Mountain Brook defense, going 62 yard to the Mountain Brook 15. Ed Osley scored his third touchdown of the night on the next play, powering into the end zone and bringing Clay-Chalkville to the brink of a state championship.

Osley scored on a one-yard run with 7:04 left in the first quarter, but the Cougars’ two-point try was no good, which became a recurring theme throughout the game.

Mountain Brook answered back with a fake field goal on fourth down, with holder Jake Thompson finding George Cain in the end zone over a leaping defender. The two-point conversion was good, and Mountain Brook led 8-6.

The Cougars’ high-powered offense was stymied for much of the night, while Mountain Brook kept the Clay-Chalkville defense on the field in the second quarter, moving the ball on a 13-play drive and eating up more than five minutes off the clock. While the Spartans didn’t score on that drive, the tactic worked to perfection as the Cougars’ offense was out-of-sync and remained scoreless through the second quarter.

The Spartans went up by another score when Colvin found Jackson Beatty for a 15-yard strike with 22 seconds left in the half. The PAT was good, and the teams went into halftime with Mountain Brook up 15-6.

Clay-Chalkville needed something good to happen in the third quarter to get back into the game, and they got a spark when Johnson hit Jaylen Mbakwe for a 22-yard score to get the Cougars on the board in the third quarter. The two-point conversion was no good, but Mountain Brook’s lead was cut to 3.

Osley took matters into his own hands in the fourth quarter, busting a 46-yard run to pay dirt with 9:09 left in the game, and the Cougars finally re-took the lead, 18-15.

A field goal by Mountain Brook’s Reed Harradine tied the game at 18 with 1:22 left, and that’s when Craver stepped up to make the game-changing play.

“I just knew I had to make a play for my team,” Craver said after the victory. “We had confidence going into that last drive because of how we moved the ball the previous drive. Someone had to make a play, and I knew that I had to be the one to make it.”

Craver, despite only being a sophomore, has been huge all season for Clay-Chalkville.

“He’s one of the best 10th grade receivers that I’ve ever seen,” Johnson said. “He’s electrifying. I’m just blessed to have him on my team.”

But the Cougars’ ultimate goal lies ahead. They rematch Hueytown, a team they defeated 57-40 in the second game of the 2021 season. That game will be on December 3 at Protective Stadium in Birmingham, with the 6A state title on the line.

“We’ve been thinking about this since Day 1,” Osley said. “Going in there every day at practice, being out there and executing. I just thank my O-line for this, and our defense. I’m very thankful.”

Celebrating on Mountain Brook’s field probably exorcised some tough memories. In 2020, the Spartans put Clay-Chalkville out of the playoffs in the third round of the playoffs with a 21-10 victory. Not this time, however.

After a quarterfinal game that saw the Cougars’ defense give up 44 points, Clay-Chalkville coach Drew Gilmer was happy to see the fight in his defense.

“Our defense played their guts out,” Gilmer said. “They (Mountain Brook) had a long drive at the end, and it’s one of those things where you’re either going to cave in or suck it up and get a stop, and they sucked it up and got a stop. I’m just super proud of our kids and coaches.”