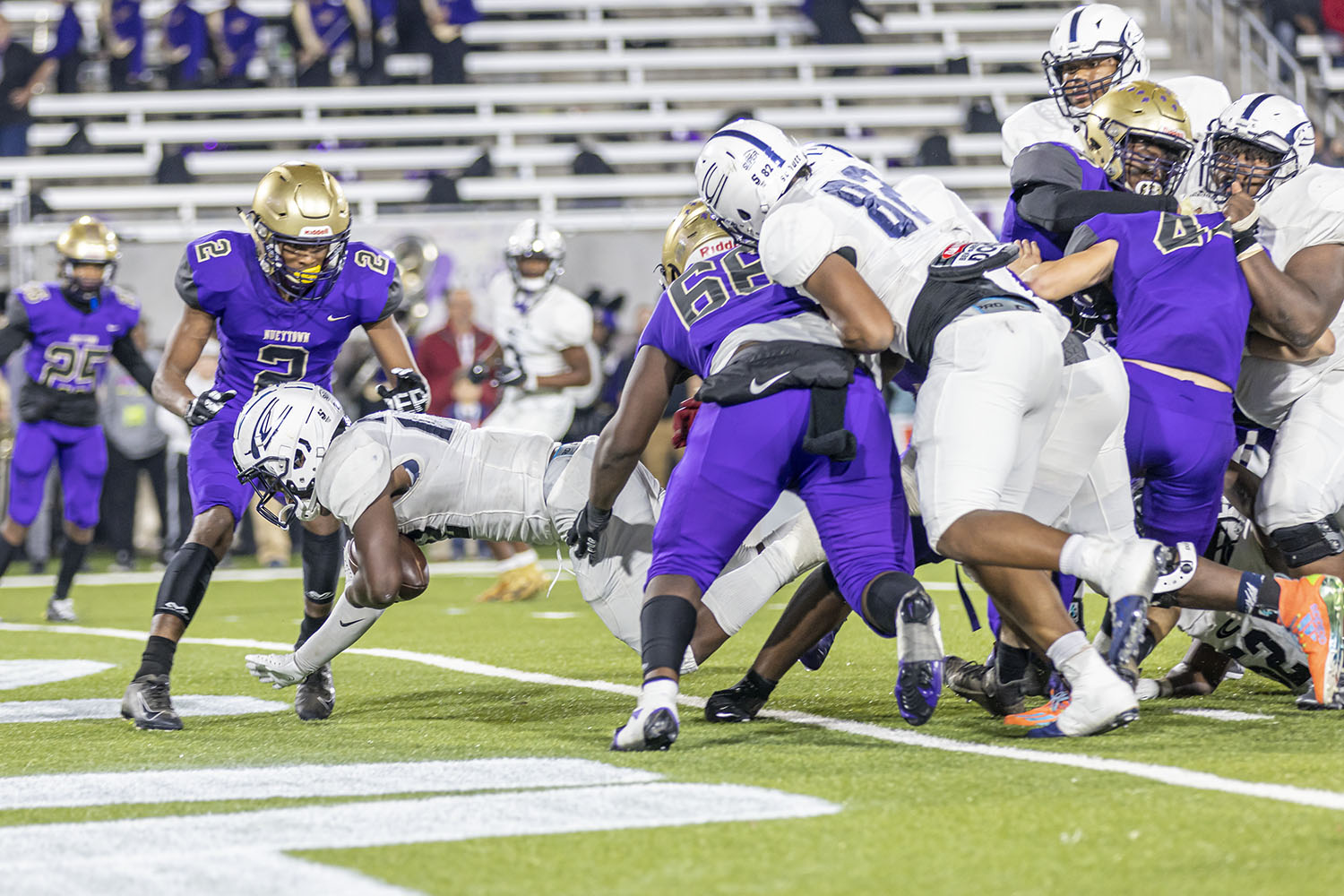 Ed Osley scores from 2 yards out for Clay-Chalkville during the AHSAA 6A championship football game. (Photo by Ron Burkett)

6A champs: Clay-Chalkville bests Hueytown in shootout for title

BIRMINGHAM — Ed Osley ran for three touchdowns in the first half and five overall, and Clay-Chalkville put Hueytown to bed for the second time this season to claim the AHSAA 6A football championship here, 46-42, on December 3, 2021. 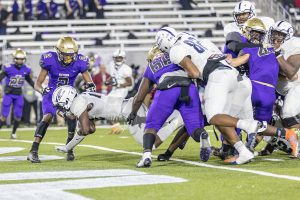 Ed Osley scores from 2 yards out for Clay-Chalkville during the AHSAA 6A championship football game. (Photo by Ron Burkett)

Osley ran the ball 28 times for 157 yards, while Mario Craver had six catches for 126 yards and a score. Khalib Johnson was 15-for-19 for 251 yards with two touchdowns and an interception. Marquarius White caught six balls for 81 yards, including a circus catch to keep a drive alive in the second half.

For Hueytown, quarterback Earl Woods ran 31 times for 112 yards and a touchdown, while De’Andre Coleman ran for a pair of scores.

Clay-Chalkville needed every point they could wring from their high-powered offense, and the game wasn’t really decided until Nathan Owens recovered an onside kick with 17 seconds left.

The Cougars started off strong defensively, stopping Hueytown on the Golden Gophers’ first two possessions of the first half, with Rodarius Sykes sacking Hueytown on back-to-back plays to force the second punt in as many possessions.

Clay-Chalkville got the scoring started when Osley came out of a four-receiver bunch formation on the right, took a handoff and sprinted down the left sideline for a 33-yard score with 8:44 left in the first quarter. Johnson found Owens for the tw0-point conversion and the Cougars led 8-0.

But Hueytown came back with a 66-yard pass from Woods to De’Andre Coleman, who also caught the two-point conversion to tie things up with 5:26 left in the first.

Osley scored again, this time from 13 yards out to put the Cougars back on top with 11:12, but Johnson threw an interception on the two-point conversion.

Disaster struck on the next possession for the Cougars. Taking over at their own 10, the Cougars’ Johnson was sacked by Stevens Hicks and Jaden Thomas to put Clay-Chalkville behind the sticks. That’s when Keith Green stepped up and intercepted a screen pass at the 13-yard line. Three plays later, Coleman scored from the 1. The Golden Gophers missed their two-point attempt, and the score was tied 14-14 with 7:24 left in the half.

The Cougars turned the ball over on downs at the Hueytown 6-yard line, and then forced a punt which was returned deep into Gopher territory by Mario Craver. Five plays later, Osley found pay dirt for the third time, and Clay-Chalkville went into the half up 22-14.

Osley, who had 92 yards in the first half alone, worked as the decoy for the next score, a 15-yard touchdown play-action pass from Johnson to Nathan Owens on third-and five play. Johnson then found Marquarius White for the two-point conversion and Clay-Chalkville went up 28-14.

Hueytown answered with a 7-yard touchdown from Jakael Rowser with 3:29 left in the third. The two-point conversion was no good, and the Cougars clung to a 28-20 lead.

On the ensuing drive, White made a circus catch to set up Craver on a 60+ yard catch-and-run. A face-mask penalty tacked on at the end of the play made it first-and-10 from the Hueytown 11. Osley didn’t wait. On the next play, he took it all the way in for his fourth score of the game. The two-point try was no good, and Clay-Chalkville led 34-20 with 1:40 left in the quarter.

Hueytown’s Woods found the end zone with 11:14 left in the game, and Coleman added a two-point conversion to make it 34-28, Clay-Chalkville. The Cougars wouldn’t have the ball long on their next possession, as the Golden Gophers forced a fumble and recovered it at the Clay-Chalkville  45.

Hueytown was helped on the ensuing drive by a roughing the passer penalty, and Woods’ subsequent pass to Rowser took Hueytown to the 9-yard line for first-and-goal. Woods hit Mitch Tucker in the back of the end zone, but Coleman lost three yards on the two-point try, and the score was knotted at 34 all.

Johnson got things going on the Cougars’ ensuing drive with his legs, running for an 11-yard first-down before finding Osley for a catch-and-run down to the Hueytown 27. After a great defensive play to deny a touchdown pass to Jalen Mbakwe, Osley sped past everyone to score his fifth touchdown on the next play. The two-point conversion was no good, and Clay-Chalkville led 40-34 with 7:11 left in the game.

The Cougars forced a turnover on the kickoff when a squib kick bounced off a Hueytown player. Then, with less than four minutes remaining, Clay-Chalkville elected to go for it on fourth-and-one. Osley powered through the line, legs churning, and got past the first wave of defenders for a 12-yard game. On the next play, Johnson hit Craver for a 35-yard touchdown pass to make it 46-34, Cougars.

Woods led Hueytown down the field again, converting a fourth-and-17 with a scrambling run through the Cougar defense. The drive was helped along with a personal foul against Clay-Chalkville that gave the Golden Gophers a first down at the 11-yard line. A Woods run to the five and a pass interference penalty moved the ball to the two-and-a-half yard-line. A shovel pass to Coleman went for a first down to the 1-yard line, and Hueytown called timeout with 25 seconds left.

On the next play, Coleman went up the middle on a direct snap for a score. The two-point try was good, and with 20 seconds left in the game, Clay-Chalkville led 46-42.

Hueytown tried an onside kick on the kickoff, but Owens recovered for the Cougars with 18 seconds left. Johnson knelt down, and Clay-Chalkville celebrated on the field.

This story will be updated with statistics and quotes from coaches and players.