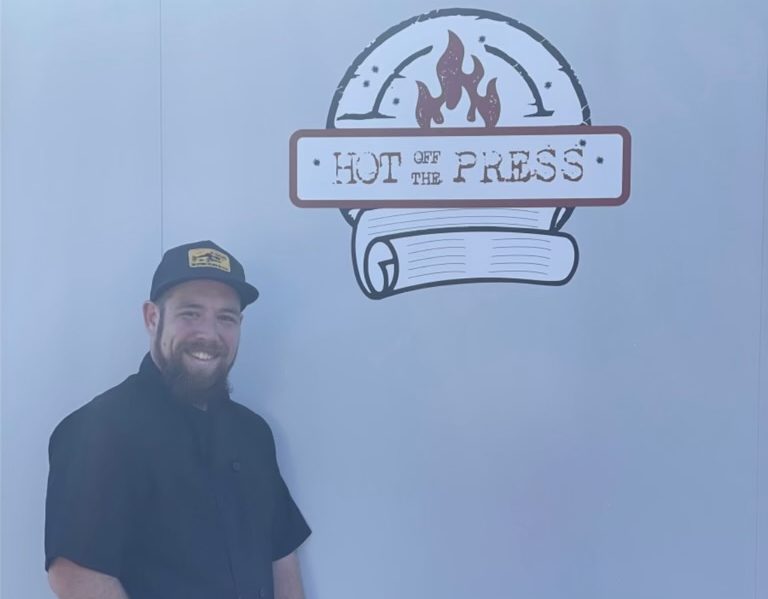 Tanner Hagood opened Hot off the Press to create delicious food for everyone to enjoy. (Photo courtesy of Ashley Potts)

TRUSSVILLE — A new food truck has opened in Trussville, and it’s “Hot off the Press.”

Tanner Hagood has always had a passion for culinary, and after working in several restaurants, he decided to start his own food truck to take his skills to the next level. Hagood opened “Hot off the Press” last month and has been serving the Trussville community ever since.

“Hot off the Press” is mainly found at Courtesy Buick GMC off Edward Lake Road and occasionally can also be found at Stockton. Hagood serves gourmet sandwiches, burgers, and quesadillas.

Hagood plans to expand his menu to include breakfast eventually.

“I think he wanted to start with simple and with what everyone leans toward as far as quesadillas, everyone is familiar with a quesadilla, a burger, those types of things,” Potts said. “But I do think he plans to get more creative and expand to more obviously, than just lunch since we’re working on a breakfast menu. But like even his fries are like hand-cut homestyle fries, it’s not just frozen kind of stuff. Everything he does is fresh.

Potts explained that Hagood’s hand cuts his fries fresh because he wants to make delicious food for his customers, and while the fries are delicious, Potts said her favorite item on the menu is the Zesty Avocado Chicken Club Wrap.

“He has a passion for food and for serving people,” Potts said. “So while his menu does highlight what he serves day in and day out, he’s very creative on the food front so that he can make pretty much anything. He’s very talented in that regard.

Hagood obtained his culinary degree from the Art Institute of Atlanta in 2013 and has worked in several restaurants such as Rays at Killer Creek, The Palm at Buckhead, and the Hammock Trading Company in Safety Springs.

Hagood has pulled knowledge from the establishments he’s worked at to create his own food truck, which he believes is the best way to serve the community and reach more people.

Potts said that the possibilities were endless regarding the future of “Hot off the Press.”

“Since this is his first time running his own business,” Potts said. “He’s taking tidbits of information that he’s learning along the way, and I definitely think that he would look forward to expanding in the future.”

Hagood is currently working on getting a St. Clair County food permit to have the opportunity to grow “Hot off the Press.”