Governor Kay Ivey recently signed legislation to make Alabama the 22nd state in the nation to adopt a constitutional carry law that eliminates the requirement for a person to obtain a concealed carry permit to lawfully carry a pistol. The new law goes into effect on January 1, 2023. 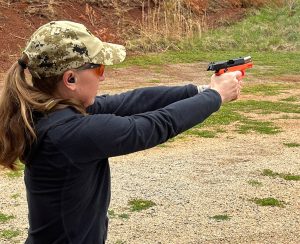 The state’s constitutional carry law was among the discussion topics last week during the Shooting Sports Showcase at the CMP Talladega Marksmanship Park. POMA (Professional Outdoor Media Association) and SEOPA (Southeastern Outdoor Press Association) hosted the event at the stellar 500-acre shooting range with Cheaha Mountain as a backdrop.

Futral said proper training is even more important and increasingly requested by the public because of the continued surge in purchases of firearms used for target shooting, hunting, and personal safety.

One of the ways that happens is through the WFF’s Firearms 101 – Introduction to Handguns classes that are held at public shooting ranges throughout the state.

The participants learn the fundamentals of operating both a semi-automatic and a revolver. They learn how to load a magazine, insert the magazine into the handgun and manipulate the safety and slide release. Instructors ensure that the students follow all safety procedures and offer tips on the proper grip for best control of the firearm and accuracy. Students also learn malfunction clearance procedures and how to safely store their firearms when not in use.

“At our Firearms 101 events, you get lessons from certified instructors,” Futral said. “Then you can go back to the same range where you learned to shoot that firearm and shoot more on your own or come back to a second class. This class offers one-on-one instruction, not just group instruction, so you get personal time with your own instructor. It’s quite the bargain for the cost of a Wildlife Heritage License.

“All of our feedback from the classes has been positive. Everybody has been very complimentary of the instructors. We’re doing our best to spread out across the state, so we’re partnering with some county sheriffs’ offices. If you haven’t been able to find a class close to you, keep checking back on our website as we add more classes.”

The next Firearms 101 classes will be held at the Cahaba River WMA Shooting Range near Helena on Saturday, April 16, 2022, and at the Swan Creek WMA Shooting Range in Limestone County on April 23, 2022. Visit www.outdooralabama.com/programs/firearms-101-introduction-handguns on a regular basis to check for updates. 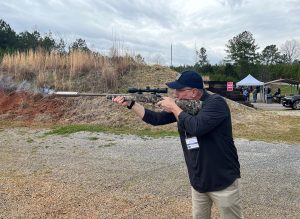 Rod Cleveland of Dead Air Silencers demonstrates the reduced recoil on a suppressed hunting rifle at the showcase. (Photo courtesy of David Rainer)

The participants learn handguns basics from their personal instructors with Smith and Wesson and Ruger .22 caliber handguns. WFF provides all necessary firearms, ammunition, and safety equipment for the new shooters.

Speaking of Ruger, the Arizona company was one of the firearms manufacturers to display its products at the Shooting Sports Showcase, and Ruger’s Public Relations Manager Paul Pluff was pleased that Alabama’s constitutional carry bill has been signed into law.

“I think the fact that Alabama has become a constitutional carry state is going to be a benefit to current shooters but new shooters also,” Pluff said. “It allows them the freedom to purchase that gun and carry it for personal protection. I absolutely think constitutional carry benefits far outweigh having to have a permit to carry. I think it’s a positive thing for Alabama.”

One of the trends in the firearms industry is the proliferation of noise-suppressing devices on firearms. One of the exhibitors at the showcase was Dead Air Silencers, which provides an array of suppressors for most shooting and hunting firearms. I shot a suppressor-equipped rifle chambered in 6.5 Creedmoor, and the recoil was reduced significantly.

“Suppressors for hunters are game-changers, in my opinion,” said Dead Air’s Rod Cleveland. “It controls recoil. It controls noise, so you save your ears. I do think, from the hunting segment, we want to bring more kids into that. For kids and new shooters, suppressors take away the two things that bother them – recoil and noise. It’s a huge benefit in that respect.

“Once you shoot suppressed on your hunting rifle, I don’t think you’ll go back.”

Cleveland said the process to buy a stamp for a suppressor through the ATF (Bureau of Alcohol, Tobacco, and Firearms) has been streamlined as of late December 2021. The ATF Form 4 is now available through E-File, and wait times for the $200 stamp have been reduced.

“You can go to your dealer with the capabilities and have your photo and fingerprints transmitted to the ATF electronically,” he said. “It uploads into the ATF system to process it. Instead of taking eight to 12 months to get it back, a few folks are reporting getting their forms back in 60 days. This is the just at the beginning of this transition, so this is good news.”

During the event, attendees tested a variety of products from Sig Sauer, Taurus, Leupold, SCCY, Century Arms, and Trailblazer Firearms, which meant plenty of spent brass was collected after the event concluded.

One of the points of concern I heard at the shooting event was the availability of ammunition for the rest of 2022.

Craig Kelley, a manufacturer’s representative for Hornady Manufacturing for decades, said demand and the availability of components are stressing the ammo manufacturers.

“In talking to Hornady, we think we will see some relief in hunting rifle ammunition by the end of 2022,” Kelly said. “It’s kind of disheartening. There’s been a shortage in the system, from distributors to retail customers. In general, the trade is out of product. We’re starting to see some relief on the popular handgun calibers and the 5.56 (mm) and .223 calibers. Those will probably catch up first because they can be manufactured more quickly, and you have domestics and imports. 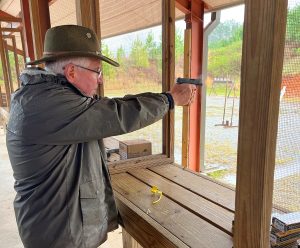 “For hunting ammunition, there’s a real shortage of brass. Powder and primers are in short supply. It’s a perfect storm for the conditions we have in the market right now. Hopefully, you’ll see some hunting ammunition by the time hunting seasons open this year. But before you see it in quantity on the shelves, it’ll be a while. And it’s not that manufacturers are not producing the products. Hornady has shipped between 15 and 20 percent more product this year compared to the prior year.”

Not only is availability going to be a problem for consumers, Kelley warned prices are going up considerably.

“While Hornady has only gone up one time since COVID started, I know some of the major manufacturers have gone up four times,” he said. “So, when product does become available in quantity, people are going to have sticker shock with prices up 30 to 40 percent.”

While Kelley certainly doesn’t advocate hoarding of ammo, he does suggest a reasonable purchase now if your caliber is in stock.

“I wouldn’t wait until June or July to see if it’s in stock,” he said. “If your retailer has it now, I would advise getting one or two boxes to be sure you have your hunting ammo.”