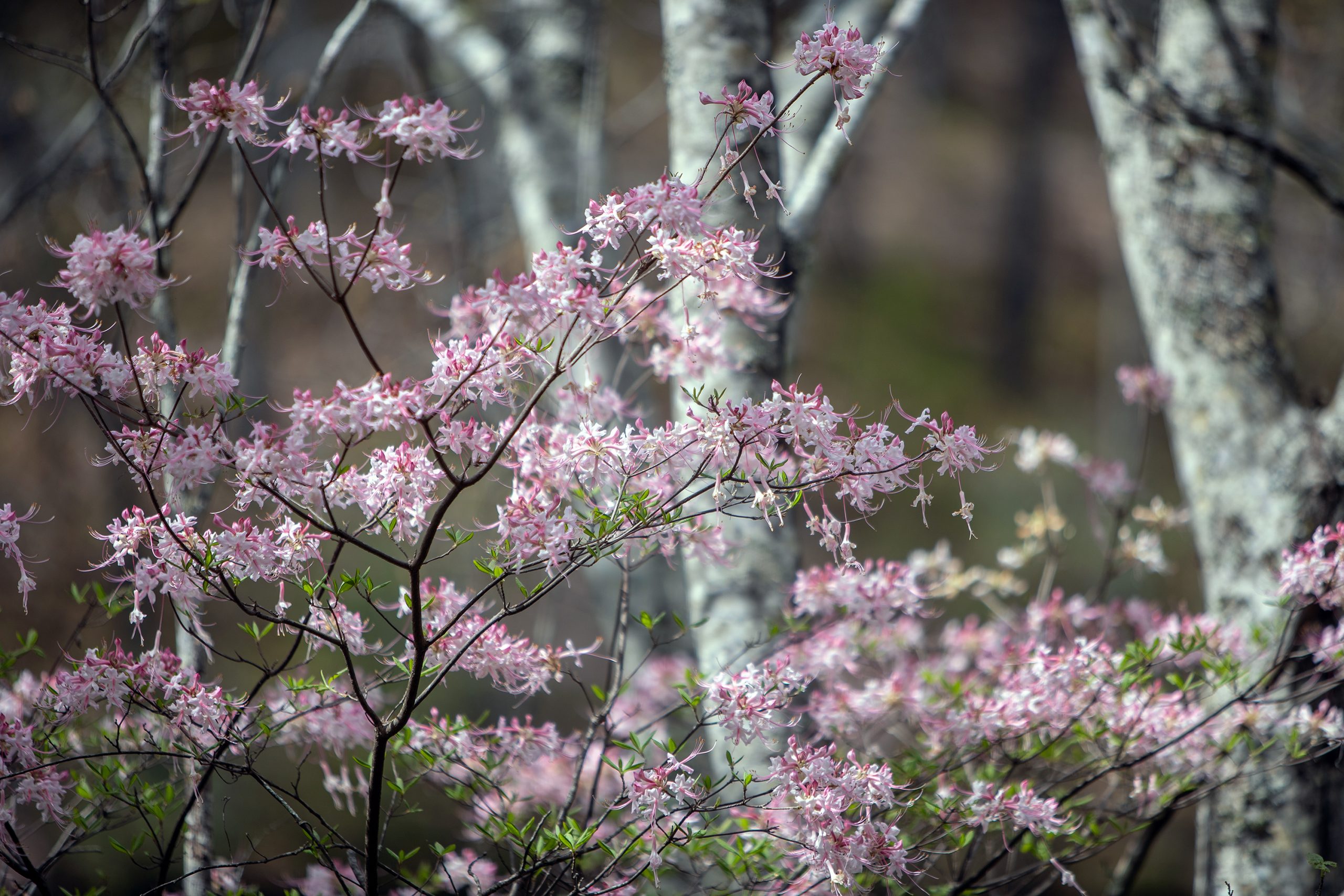 The mountain azalea is one of the species of flora found on the Belcher Tract. (Photo courtesy of Billy Pope)

At the celebration of purchasing the 1,644-acre Belcher Tract property adjacent to Oak Mountain State Park, the Forever Wild Land Trust Board exhibited the benefits of prudent spending. 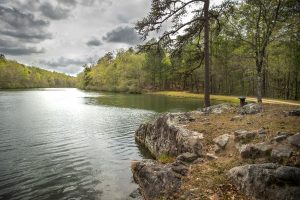 The picturesque property in Shelby County will become a part of Oak Mountain State Park to be enjoyed by the citizens of Alabama and visitors for perpetuity, thanks to the Forever Wild Board’s vision for this prized acquisition.

“The Forever Wild program, I think, is one of the best programs ever created in the state of Alabama for conservation,” said Chris Blankenship, Commissioner of the Alabama Department of Conservation and Natural Resources (ADCNR) of the program that was created in 1992 to take a portion of interest earnings from the state’s offshore oil and gas production and use it to purchase property of value for public recreation and important habitat conservation. “The whole premise behind that is you’re taking something that is a depleting resource, oil, and gas, and you’re putting the money back into a program that acquires property that will be forever protected and used by the people of Alabama.

“I’m so thankful we were able to complete this acquisition. This is an acquisition that started many years ago, working with Dell, Dixon, and Nelson Brooke, and the EBSCO family to get this across the finish line. I think this is one of the most important accomplishments since I’ve been Commissioner and Chairman of the Forever Wild Board. The Board and members of the community were so excited. Even before it was announced, it got so much press in the Birmingham area, which shows how much people care about the park and this area.”

“This would not have been possible without the Forever Wild Board not only desiring the property but showing the stewardship to let enough funding accumulate to make the purchase,” McCurdy said. “It took a lot of discipline over a long time to be in a position to make the purchase. They did that. It shows the program can make landmark purchases as well as smaller ones. There are some properties worth waiting for, and this is one of them.

“This acquisition is probably one of the best examples of how Forever Wild provides access to the public for outdoor recreation and, at the same time, promotes conservation of the unique habitats found on the property. We can do both. That was the purpose of the program when it was formed. This property is really going to give us the ability to showcase a multiple-use management strategy.”

Commissioner Blankenship said that Forever Wild has acquired 285,000 acres around the state, and more than 99 percent of that property offers public access for outdoor activities.

“Amenities and access to those lands are very important – safe parking, restroom facilities, good wayfinding signage on the trails – things that make these properties more accessible to people,” he said. “I think one of the priorities moving forward is to make access to them first-class, where people can really enjoy them and get the most use out of them.” 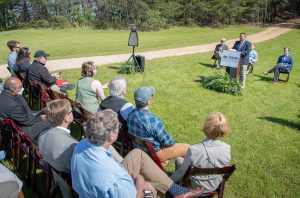 ADCNR Commissioner Chris Blankenship addresses dignitaries and the media at the event to celebrate the addition of the Belcher Tract to Oak Mountain, already Alabama’s largest park.(Photo courtesy of Billy Pope)

“This project is one of those maps we looked at,” Commissioner Blankenship said. “Of the many things we talked about, this seemed to be one of the priority opportunities for us in the state. However, it seemed almost unattainable for a property this size in this part of the state, knowing the valuation and what it would take to acquire it.

“I want to give credit where credit is due. The idea for this project came from The Nature Conservancy and started on the hood of a car under a carport in the middle of a thunderstorm.”

“The Appalachian Mountains start here in Alabama and go all the way to Maine,” Reid said. “That forest intersected with the Appalachians in Alabama, and those trees went up the mountains and became mountain longleafs. We’re sitting in the middle of that forest. The Oak Mountain State Park Belcher Tract is a part of the mountain longleafs that exist nowhere else on earth. This is an Alabama story.

“In The Nature Conservancy, we want to build and preserve a connection of this forest from the Gulf Coast all the way up the Appalachians to Maine. This is a critical piece of that story. The credit goes to Forever Wild, the Department of Conservation, and EBSCO.”

EBSCO CEO David Walker said the company purchased the Belcher Tract 25 years ago and is happy the transaction will preserve the integrity of the land.

“This project was possible because EBSCO shares the vision that Forever Wild as well as The Nature Conservancy have, that is a shared ambition for conservation to protect this property and protect the environment and our collective ambition that we can sustain and advocate future sustainability in the state of Alabama,” Walker said. “But the real benefactors of this property are you and me and our children, our grandchildren, and future generations, who will get to enjoy this beautiful property, including these vistas, the forest, lakes, streams, and trails that we will be able to enjoy into perpetuity.”

Dr. James McClintock, a biology professor at the University of Alabama at Birmingham and a Forever Wild Board of Trustees member, said Oak Mountain State Park is a special place for him and many other people who value the state’s largest park.

“Having hiked, biked, camped, and fished this amazing state park for three decades, I can personally speak to the value of more hiking and biking trails, not to mention some downright great fishing lakes,” McClintock said. “Let’s pause and think of the other inherent value of this land, its biodiversity, the word that describes the community of plants and animals and microbes that stitches together as an ecological community. The greater the biodiversity, the stronger the stitches, and the more resilient and sustainable this ecosystem will be.

With the Belcher Tract addition, Oak Mountain State Park now encompasses more than 11,000 acres, a crucial factor, according to McClintock.

“Think of this park as an island,” he said. “We know from the groundbreaking work of E.O. Wilson (born in Birmingham), one of the world’s most famous naturalists, that the bigger the island, the greater the number of species. If we can continue to expand protected land and build corridors of connectivity across Alabama, we can build toward sustaining the biodiversity for countless generations. This addition to the park will bring joy, both in recreation and environmental sustainability.”

“We’re still doing the environmental and biological assessments to identify those areas where we want to keep the public from disturbing threatened and endangered species,” Commissioner Blankenship said. “So, we’ll be looking to open up more public access later in 2022. We’ll be working with people in the community like Birmingham Urban Mountain Peddlers and other hiking groups and trail-building groups. We want to do it is as quick as possible, but we want to do it in the right way to protect the land and biodiversity here.” 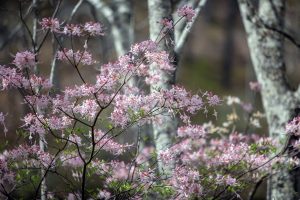 The mountain azalea is one of the species of flora found on the Belcher Tract. (Photo courtesy of Billy Pope)

With its location near Chelsea along the U.S. Highway 280 corridor, plans for access from that highway will be a consideration in the future.

“The plans are to have access from 280 once we get some security measures in place,” Commissioner Blankenship said. “We’ll be working with Shelby County and the sheriff’s office and others to ensure safety will be taken care of, and there will be access for park rangers.”

Commissioner Blankenship praised the beauty and amenities of the Alabama State Parks System with its 21 state parks. However, many of those parks were built more than 80 years ago, and some of the campground infrastructure will not accommodate modern RVs. He said Amendment 1 on the May 24 ballot is a bond issue that will provide $85 million in funds for the much-needed upgrades at Alabama State Parks.

“We call it the State Parks Amendment,” he said. “It will be the only amendment on the ballot, and we would appreciate your support. As Governor (Kay) Ivey said, it’s extremely important for our parks moving forward.”